By Aiman Turebekova in International on 6 October 2015

ASTANA – During the recent 70th session of the UN General Assembly, the United Nations Development Programme (UNDP) and the government of Kazakhstan launched a new programme to help 45 African countries implement the newly-inaugurated Sustainable Development Goals (SDGs), reported the press office of the UNDP. 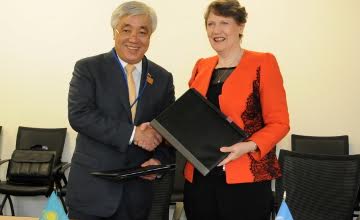 Kazakh Minister of Foreign Affairs Erlan Idrissov and UNDP Administrator Helen Clark at the signing ceremony for the Kazakh-African Partnership for the SDGs on Sept. 28.

UNDP Administrator Helen Clark and Kazakh Minister of Foreign Affairs Erlan Idrissov signed on Sept. 28 a $2 million cost-sharing agreement for technical support to ministries of foreign affairs and other relevant institutions in these countries. Known as the Africa–Kazakhstan Partnership for the SDGs, the initiative will enable participation in global debates and boost the exchange of information among them and with other countries outside Africa.

Speaking at the signing ceremony organised on the margins of the UN General Assembly, Idrissov emphasised that Kazakhstan, attaching great importance to South-South cooperation, tries to contribute to the development of the African continent. The government of Kazakhstan will continue promoting the SDGs and the Global Initiative for South-South cooperation, he said, and in this regard, will continue providing assistance to African countries together with the UNDP as a means of institutional development in the framework of the new project.

UNDP Administrator Clark noted that the Africa-Kazakhstan Partnership for the SDGs is a significant step as Kazakhstan becomes an important partner of the UNDP on the global scale.  The initiative paves the way for Kazakhstan’s broader engagement in development cooperation, including through the emerging KazAID agency, which the UNDP is also supporting. This kind of partnership between Kazakhstan, the UNDP and partners across Africa comes as a critical time. The project will help maintain the momentum created by the Global Summit in New York, where 193 member states of the United Nations adopted the new SDGs.

“The SDGs will require a huge amount of mobilisation, and it is encouraging to see countries like Kazakhstan reaching out to others,” Clark said.

Over the past 20 years of cooperation, the UNDP has assisted Kazakhstan in preparing key national and regional policy documents, legislative drafting, institutionalisation and capacity building of authorities at different levels of government. These efforts were made by using best global practices and ongoing support to achieve the Millennium Development Goals.

Kazakhstan has achieved the first three Millennium Development Goals and has set more ambitious “MDG+” goals and targets: to halve poverty among its rural population; to achieve universal secondary education; to ensure gender mainstreaming in national planning and budgeting; to prevent violence against women and increase women’s representation in legislative and executive bodies.

The UNDP has also been assisting Kazakhstan in the establishment of KazAID, the new national agency for official development aid, which marks an important evolution in the country’s role regionally and globally. The support and partnership will focus on Central Asian and African countries, as well as small island developing states.