Kazakhstan, Japan Call for Early Entry into Force of CTBT

By Altair Nurbekov in International on 1 October 2015

NEW YORK – Foreign Minister of Kazakhstan Erlan Idrissov and Japanese Foreign Minister Fumio Kishida as well as UN Secretary General Ban Ki-moon and numerous other top officials and diplomats called for stepping up efforts to ensure an early entry force of the Comprehensive Nuclear-Test-Ban Treaty or CTBT. The pact would prohibit all nuclear tests. 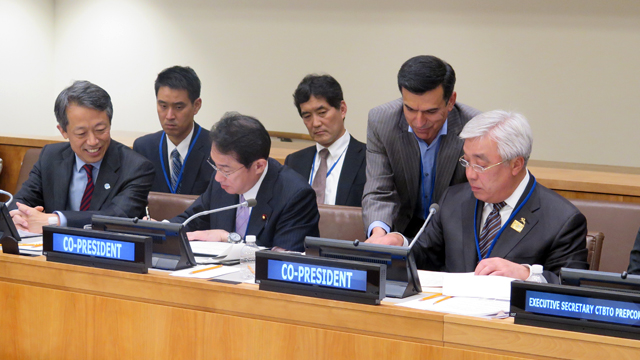 The two foreign ministers entered into two years of co-chairing the ninth Conference on Facilitating the Entry into Force of the CTBT on Sept. 29 in New York.

The nuclear test ban treaty was adopted at the UN General Assembly in 1996. However, the pact has yet to take effect, as nuclear powers such as China, the United States, Egypt, Iran, Israel, North Korea, India and Pakistan have failed to either sign or ratify it.

“Nearly two decades after its negotiation, the Comprehensive Nuclear-Test-Ban Treaty has still not entered into force. A breakthrough is long overdue,” UN Secretary General Ban Ki-moon told delegates. “We need every person in this room to show leadership on the urgent international imperative of ending nuclear tests,” Ban said.

He was unusually blunt in his comments as he addressed the eight countries on whose actions the CTBT’s entry into force depends. “You have a special responsibility,” Ban said. “You must not wait for others to act before ratifying.”

Japan and Kazakhstan took over the rotating two-year chairmanship in the conference from Indonesia and Hungary. In their remarks, representatives of all four nations expressed frustration over the lack of progress on the CTBT’s entry into force.

In his speech, Idrissov noted the uniqueness of the co-chairmanship of Kazakhstan and Japan, two countries that have suffered from the effects of nuclear weapons’ explosions and which have the full moral right to demand concrete steps from the states that have not signed or ratified the CTBT, he said.

“This document, along with the Treaty on the Nonproliferation of Nuclear Weapons, is the cornerstone of the entire global security system. Therefore, we are for the full universalisation of the treaty. Its entry into force will become an important step forward on the road to a world free of nuclear weapons. Kazakhstan intends to make substantial progress in this important work,” Idrissov said.

“We all know what it is all about,” Idrissov told the gathering, choosing to forgo prepared remarks and speak of the cuff. “We all know that its entry into force depends on the signing and ratification of the CTBT by the eight states. We believe that the time for specific steps and direct conversations has come. It should be no longer business as usual. As we have just agreed with my colleague, Foreign Minister Kishida, we will be very aggressive in our work, we will be blunt and we sometimes will not be diplomatic as we will seek to achieve the CTBT’s entry into force,” Idrissov said.

Idrissov stressed Kazakhstan’s contribution to global nuclear disarmament and nonproliferation, including it most recent initiatives. On the initiative of President of Kazakhstan Nursultan Nazarbayev, the UN announced Aug. 29, the day of the closing of the Semipalatinsk nuclear test site, as the International Day against Nuclear Tests. Since 2012, in the framework of the international initiative The ATOM Project, every person in the world who opposes nuclear weapons can sign an online petition addressed to world governments to end nuclear testing forever, as well as support the early entry into force of the CTBT. Today, the petition has been signed by more than 200,000 people from over 120 countries.

CTBT Preparatory Commission Executive Secretary Lassina Zerbo, in his own remarks following Idrissov’s, noted the contribution of The ATOM Project and especially its Honorary Ambassador Karipbek Kuyukov in galvanising global public opinion to the cause of banning nuclear testing permanently. The ATOM Project presented its activities during a Sept. 10 informal session of the UN General Assembly dedicated to the International Day against Nuclear Tests.

In his remarks, Idrissov also noted that President of Kazakhstan Nursultan Nazarbayev in his Sept. 28 remarks at the UN General Assembly suggested an initiative to achieve a world without nuclear weapons by 2045.

“This goal seems quite distant and unattainable, but it is achievable with the presence of political will and we need to start moving towards that goal today,” Idrissov stressed. “Yes, we can achieve a world without nuclear weapons,” he said, recalling the 2008 electoral slogan of U.S. President Barack Obama.

Kishida said at the meeting that it is vital that efforts toward the treaty’s implementation be accelerated, as a test ban is a key pillar in nuclear arms reduction. He called on participants to make their greatest efforts to bring political pressure to bear on countries that have not ratified the treaty.

Kishida, whose home city is Hiroshima, cited the words of a Hiroshima atomic bomb survivor who said the threat posed by nuclear arms should not be forgotten, even for one day, in order to secure the survival of mankind. Kishida called for the CTBT to be supported “at the highest possible level” and said: “We need everybody for this treaty to be able to enter into force.”

As part of the conference, Idrissov also met with Lassina Zerbo of CTBT. During the meeting, the foreign minister noted that Kazakhstan highly appreciates the current level of cooperation with the organisation, and, in particular, supports the initiative on assembling the Group of Eminent Persons with the goal of promoting CTBT’s early entry into force.