By Aiman Turebekova in International on 16 October 2015 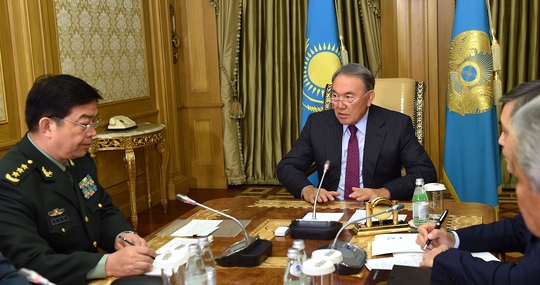 Nazarbayev congratulated the minister of defence of China on the success of the Beijing military parade dedicated to the 70th anniversary of victory in World War II. The President of Kazakhstan emphasised that in the course of the event, the People’s Liberation Army demonstrated to the world its power and technical equipment. In this context, the importance of strengthening cooperation between the defence ministries of the two countries was stressed, reported the President’s press office.

In addition, the President noted that Kazakhstan highly appreciates China’s so-called negative security guarantees on the Treaty on the Zone Free from Nuclear Weapons in Central Asia. In turn, Chang thanked Nazarbayev for the meeting and conveyed the greetings of President Xi Jinping.

During the meeting, the President noted that Kazakhstan and China are at a new stage of cooperation.

Furthermore, Chang announced that China was donating some military trucks to Kazakhstan, according to Kazakhstan’s Ministry of Defence. An agreement to this effect was signed between the visiting Chinese official and his Kazakh counterpart, Minister of Defence Imangali Tasmagambetov.

During their Oct. 12 meeting, Chang and Tasmagambetov discussed special forces training. “Training and exchange of experience in the sphere of combating asymmetric threats (training special forces units) is an important aspect of cooperation,” Minister Chang highlighted.

“Kazakhstan is interested in organising joint events on mountain training, training of military swimmers, actions in urban environments for special forces. In the near future, joint tactical anti-terrorism exercises are planned on the territory of China and Kazakhstan,” said the Kazakh Minister of Defence.

As a result of the meeting, the ministers signed an agreement on China’s free-of-charge technical assistance to the Kazakh Army. Based on the signed agreement, China will provide bolster-type tractors with trawls and loading-unloading platforms for the Kazakh Army.

Tasmagambetov presented an invitation to Chang for China to take part in the International Military Exhibition KADEX-2016 in Astana to showcase his country’s technical capabilities. “I hope that China’s military-industrial complex will be presented on a high level. It will give an additional boost to our military and technical cooperation,” Tasmagambetov said.