Historical Buildings of the New Capital

By Kamila Zhumabayeva in Astana on 6 October 2015

ASTANA – The history of the capital city of Kazakhstan is revealed through some of the old buildings quietly standing on the busiest streets and avenues of Astana’s old half. The former trading company of Matvey Kubrin, mansions of merchants like Vasiliy Kubrin and Moiseyev, a school for Muslim youth and the Church of Konstantin and Elena are among the best-preserved. 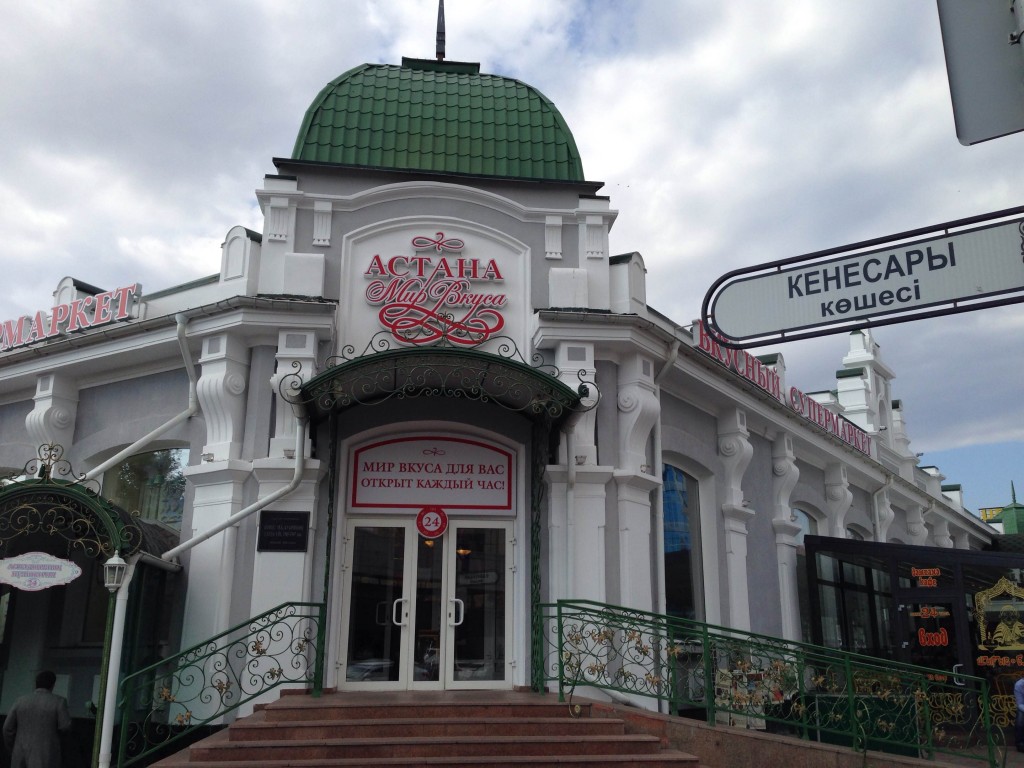 The Astana Supermarket on Kenesary Street. 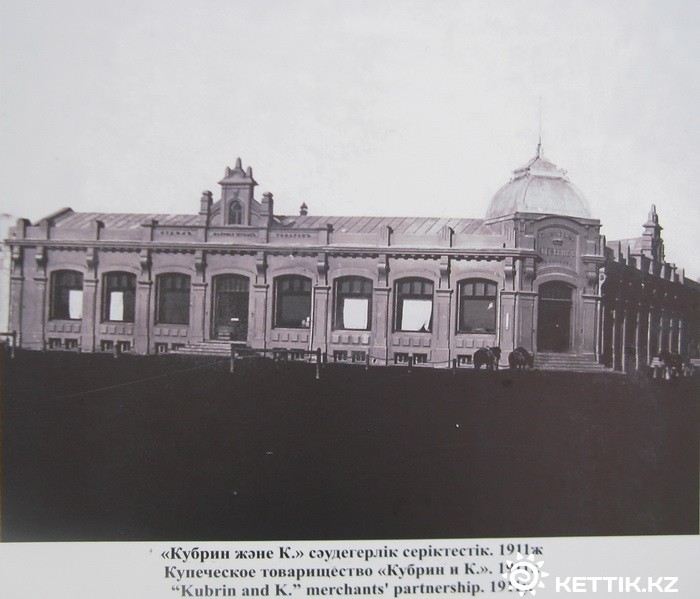 The Astana Supermarket building as it originally looked. Photo: Kettik.kz

Head of the Architecture Department, professor and candidate of architecture at Gumilev Eurasian National University and member of Kazakhstan’s Architects and City Planners Union Sara Sadykova spoke to us about the creation of the city’s architecture from the middle of the 18th century to beginning of 20th century.

“In 1830, the imperial government ordered to set down military fortifications deep inside Kazakhstan, on the Yessil River shores. Closer to the 20th century, military fortifications were no longer necessary and the territory began developing into a city named Akmolinsk (Akmola) along the right bank of the river, as it was less exposed to spring high waters,” Sadykova said.

A lot of Russian and Tatar tradesmen and merchants began to live in the city and construct wooden buildings with fortified walls and watchtowers when it started to develop as a regular settlement. “Akmola was the northern border of the Great Silk Way intersection where a lot of trade fairs passed,” the professor noted.

According to Sadykova, Akmolinsk began to develop as a trade city in 1890–1891. The city budget was increased, and construction of the city garden, council, arcade, fire tower and other facilities began. Merchants were wealthy residents and started to build stylish stone stores and mansions. 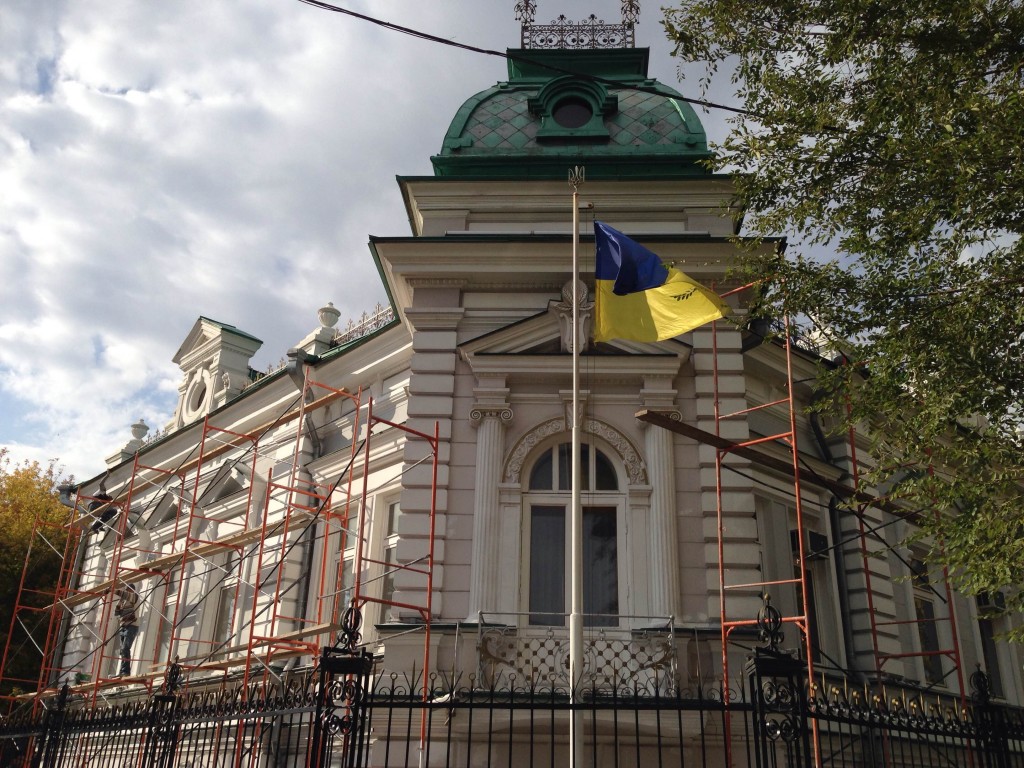 The Embassy of Ukraine on Republic Avenue, formerly a mansion, built by merchant Basiliy Kubrin, the son of Matvey Kubrin.

Known to many as the Astana Supermarket (at the crossroad of Bokeikhan Street and Kenessary Avenue) and the building of the Ukrainian Embassy (on Kenessary Avenue, a few metres away from the store) are historical landmarks of Astana, which are closely connected with the name of the Kubrins merchant dynasty.

According to a Your Vision blog post on April 13 by blogger Sholpan Mars, in pre-revolutionary Akmolinsk, the Kubrins were famous not only for their outstanding entrepreneurial abilities, but also for their attentiveness to the material and spiritual needs of residents, which was manifested in the generous donations of the family in support of various social undertakings.
Stepan Kubrin was elected head of the city in 1891 and a small street in modern Astana was named after him. The Astana store was built in 1905-1907 and belonged to Matvey Kubrin, the uncle of Stepan, the blogger said.
“In 1913, Kubrin’s company was trading pharmaceuticals, manufactory, haberdashery, jewellery, paper and stationery, as well as clothing, foot- and headwear, watches, tea and sugar,” it was stated in the Siberian Commerce and Industrial Yearbook. 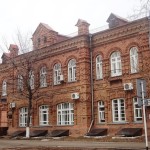 Central clinical hospital for handicapped veterans of the Great Patriotic War (a few metres away from “Astana” store on Bokeikhan street), formerly a mansion that belonged to the merchant Moiseyev.

According to Mars, the store was named Raduga (Rainbow) during the Soviet era. It was also called as “goreliy” (Russian for burnt) among people, when all wooden constructions of the building were burned down due to the fire in 1944.

Nowadays, the Astana Supermarket is one of the most successful supermarkets on the right bank. The external appearance of the store has been purposefully kept as close as possible to its initial appearance and the interior walls are decorated with old photographs of the city’s merchants of the early last century, the blogger wrote.

The stylistically similar building that is now occupied by the Embassy of Ukraine was a mansion built in 1910–1912 by merchant Vasiliy Kubrin, the son of Matvey Kubrin. In different years it was occupied by different organisations and establishments, including militia and regional historical museum, the blog post said.

The story of its emergence in the Kazakh steppe town is interesting. According to the blogger’s findings, Vasiliy Kubrin, while on a business trip in Saint Petersburg, fell in love with an actress of the Moscow theatre and proposed to her. She agreed, but the condition for her moving to Akmolinsk was to build the famous Kubrin mansion, which still adorns the old centre of Astana. 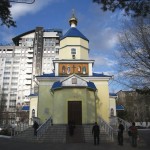 The Church of Constantine and Elena, off Republic Street.

According to the blogger, another old two-storey mansion a few metres from the Astana store originally belonged to the merchant known now only by his last name, Moiseyev. The mansion was begun in 1914 and finished in 1918 for the merchant, who came from Russia to take advantage of the busy trading scene in the Akmola region. Wealthy merchants like him built stone and brick houses to protect themselves from fires. Representative of Soviet authority accommodated the mansion a year after it finished building in 1919 and the merchant did not even manage to inhabit his house, the blogger stated. The mansion has retained its original appearance and is now occupied by the central clinical hospital for handicapped veterans of the Great Patriotic War.

According to Mars, the Kazkommertsbank building on the other side of the Bokeikhan Street, a few steps away from the mansion, once was a Koshegulov School for the Muslim youth. The result of a 1986 reconstruction was an overbuilt second floor, which according to experts has considerably reduced the uniqueness and historical value of the old structure.

“This could have been reconstructed in a more delicate way, as it was not a very good decision,” Sadykova said.

The Church of Constantine and Elena just off Republic Avenue, built in 1900, has been better preserved. The Soviet government closed the church, but its service was resumed on the request of believers later during the Great Patriotic War. 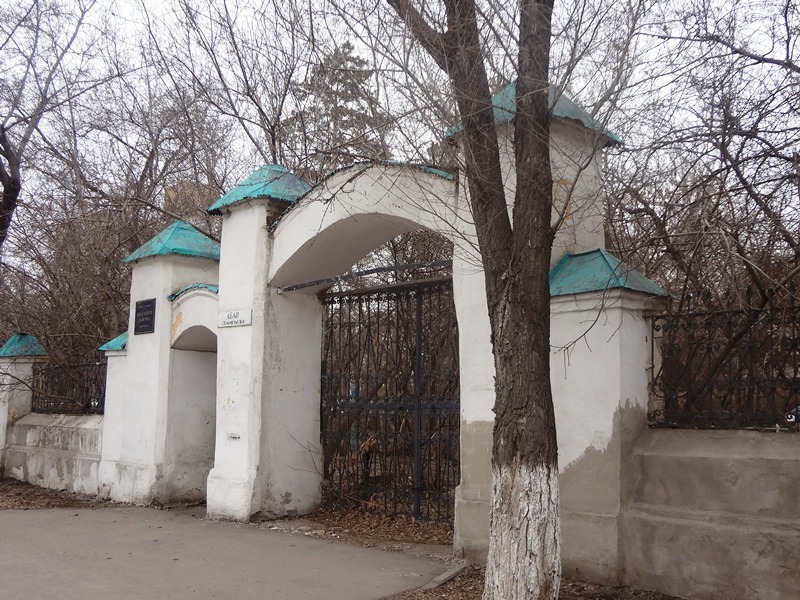 Fencing around the Green Mosque on Abai Street. The mosque itself was demolished. 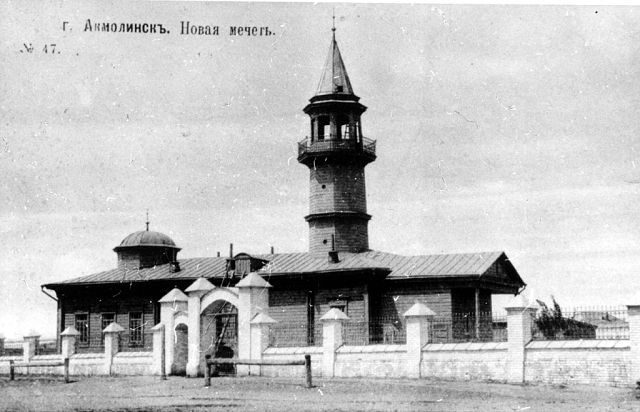 The Green Mosque, built in 1895 and since demolished.

Many cathedrals were built in the biggest cities of 19th century Kazakhstan, and the Kubrin merchants donated a lot of money for the construction of the Alexander Nevsky Cathedral in Akmola. Emperor Nikolai II donated a sacred icon and a student of a famous artist came to Akmola from Moscow to make paintings for the walls of the cathedral. It was a majestic, impressive church, the most beautiful building and pride of the city, the blogger described. The temple was turned into a club, theatre and cinema under the first Soviet Union state, then was plundered and fully demolished between 1931 and 1941. Tatar merchant and cattle dealer Nurmukhamed Zabirov built the city’s Green Mosque in 1895, which was demolished as well. Only the fencing of the mosque on Abai Street was retained.

Many historical memorials, cathedrals and mosques were either exploded, burnt down or demolished due to the war on religion and restructuring by the Soviet state but the few landmarks that remain are under government protection today.