Golovkin Continues KO Streak by Stopping Lemieux in Eighth Round 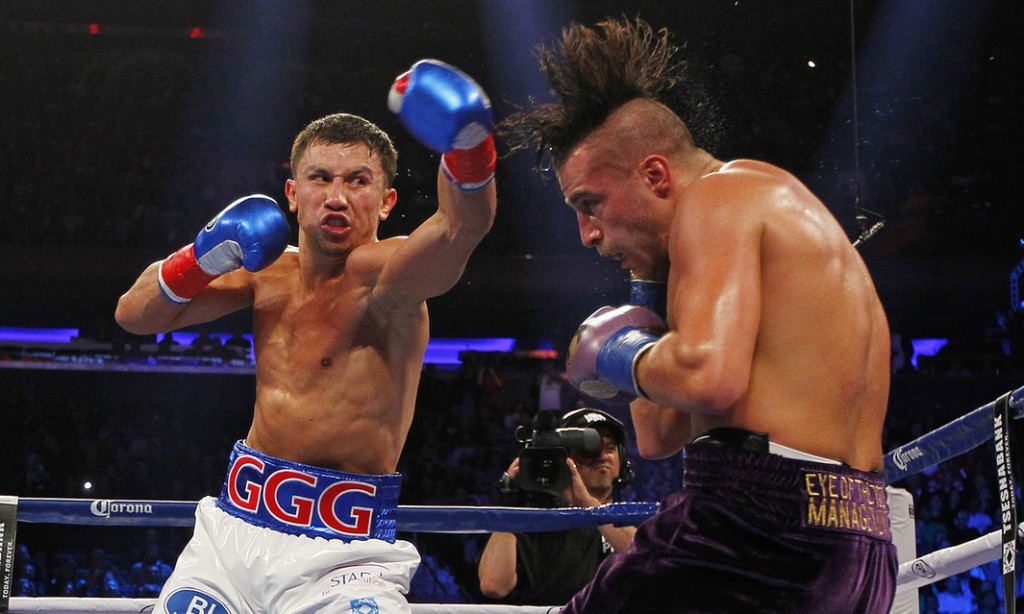 If there are two words to describe Golovkin’s fights, they would be “unexpected surprise.” That was the reaction of Briton Matthew Macklin in June 2013 when he went down in the third round against GGG with one of the hardest hits ever to his liver, he admitted after the bout.

Golovkin was also an unexpected surprise for Curtis Stevens, who was floored five months later in round two of their encounter, and his appalled reaction became a viral hit on Twitter. Golovkin later admitted the American hit harder than Lemieux, as quoted by boxingnews24.com.

The list goes on, but most importantly he is unexpectedly becoming the most fearful, most thrilling and one of the biggest box-office draws in the ring. If only two years ago Golovkin’s fights gathered some two-three thousand spectators, today he sells out the 20,548-seat MSG and makes the 17 million people in his home nation get up early on Sunday mornings to chant “Gena! Gena! Gena!”

The event was the first pay-per-view fight for the 33-year-old Kazakh, who undoubtedly had the support of his fans in the arena. What caught the eye of millions around the world, however, was a good luck wish by U.S. presidential candidate Donald Trump, who visited Golovkin in his locker room before the bout. Yet the boxer didn’t need any luck, as everything he and coach Abel Sanchez planned prior to the match happened that night.

Before the fight, Lemieux, 26, claimed he had no fear facing Golovkin, promising this time to show some hard punches resulting in a different outcome. The Canadian, however, found himself in a trap after the first round, as the Kazakh carefully, patiently but surely lured him into his snare.

What went wrong once the confident Lemieux stepped his foot in the ring? Why did his self-assurance disappear after the first two rounds?

The boxing event ‘mismatch’ rather than ‘match’ was preordained and the heavy favourite and his numbers at the end of the evening were a clear confirmation of the prediction. The Kazakh connected on 280 of his 549 punches, or 51 percent, according to Compu-Box, while Lemieux landed only 89 of 335 punches (27 percent).

Lemieux needed to find a way to get close to Golovkin, but his attempts looked like those of an amateur, and Golovkin was quick to take advantage of his opponent’s wide, exposing shots. As a result, the Canadian missed a number of Golovkin’s jabs that eventually added up to a nose bleed. Yet everybody knows Lemieux is a slugger, everybody including those in the GGG camp. This time, the team picked a different strategy instead of the familiar “cat and mouse game.” The Kazakh showed some of his defensive skills, although he didn’t need them, and he stuck to his game plan.

In the fourth round, Golovkin landed two massive clear rights and Lemieux appeared shaken from that point forward. In the next round, the Canadian went down after a left-right-left combo that hit his liver. While on his knee, Golovkin landed another power punch and only then was stopped by the referee. He decided not to linger and went for “the punch,” but Lemieux was literally saved by the bell.

As anticipated, Lemieux tried to come back in the sixth round and connected a few punches, but his nose continued to bleed. In the seventh, he couldn’t breathe well and in the eighth the referee decided it was enough beating and waved it off for a technical knockout. As a result, Golovkin has now combined the World Boxing Association (WBA), World Boxing Council (WBC) and International Boxing Federation (IBF) middleweight titles.

After the match, Golovkin called out the winner of November’s Canelo Alvarez-Miguel Cotto fight.