By Michelle Witte in Culture on 20 October 2015

ASTANA – A travelling digital exhibition on World War I, “14–18,” organised by the French Institute, the Mission of a Century after WWI and the Agency on Teaching French Abroad (AEFE) opened at the National Academic Library of Kazakhstan in Astana on Oct. 15 with the participation of the French ambassador to Kazakhstan. 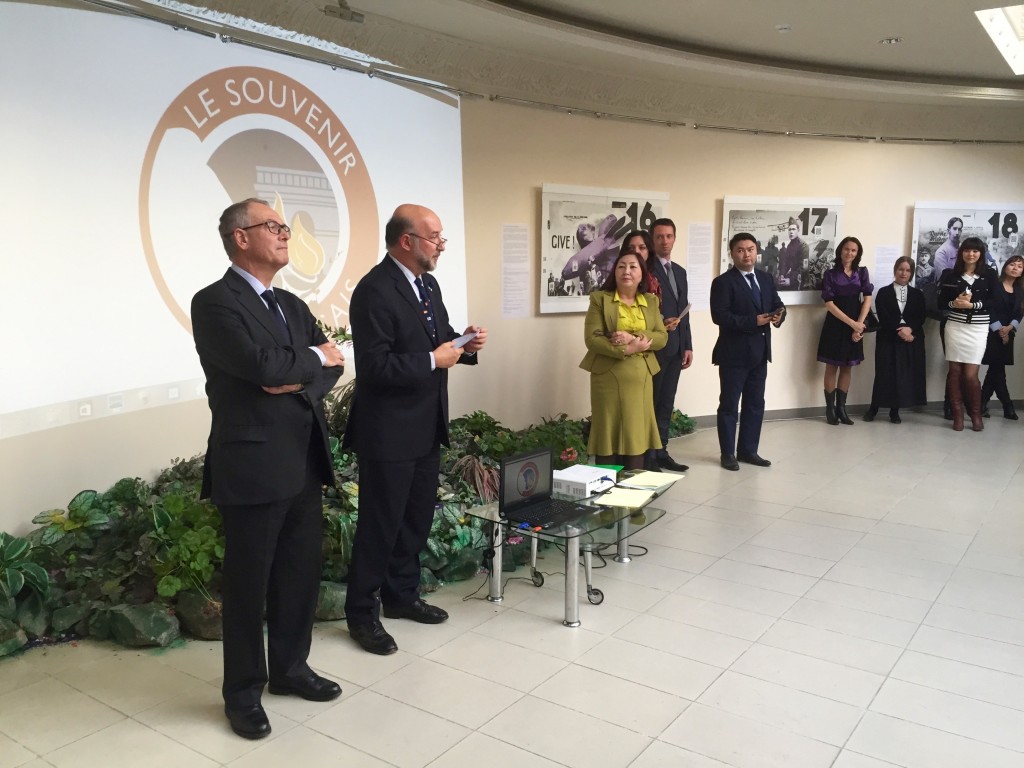 President of Souvenir Français Serge Barcellini (L), Ambassador of France to Kazakhstan Francis Etienne, Director Umutkan Manualbayeva, Counselor for Culture at the French Embassy Guillaume Kasperski and Chair of the Alliance Française in Astana at the opening of “14–18″ in Astana.” Photo credit: Lise Barcellini.

“This exhibition reflects the strong mobilisation of the French diplomatic network on the theme of memory,” said Ambassador of France to Kazakhstan Francis Etienne, opening the exhibit. “Memory works over the long term. It plays a strong and positive role in the construction and influence of nations. We are witnessing today a marked return of national memories, as evidenced from the numerous commemorations recalling the importance of the First World War.”

The 14–18 exhibit uses digital technology to share music, photos and videos about WWI. Built chronologically, the exhibition follows a deliberately scattered development intended to reflect the multiplicity of experiences of the war on different continents, a statement on the exhibit explained. Information is provided on fronts from northern France to the eastern front and perspectives from within France as well as colonies of embattled countries are presented, as are the accounts of companies at war, victims of occupation and others affected by the war. The exhibition, launched in November 2014 in partnership with Gaite Lyrique, the new Parisian institution responsible for promoting digital culture among the general public, has been shown in 100 countries. According to organisers, it will remain open in cities across Kazakhstan, including Karaganda and Almaty, through 2016. This is the first time the exhibit has been opened in Central Asia.

The 14–18 exhibition will support actions that will take place across the world to commemorate significant dates during the war, organisers said in the statement on the opening. France will work with veterans, schools and museums in Kazakhstan on other memorial events, they said.

Also attending the opening was Serge Barcellini, President of Souvenir Français (The French Remembrance), the association tasked with keeping the memories of fighters for freedom and the rule of law alive in France.