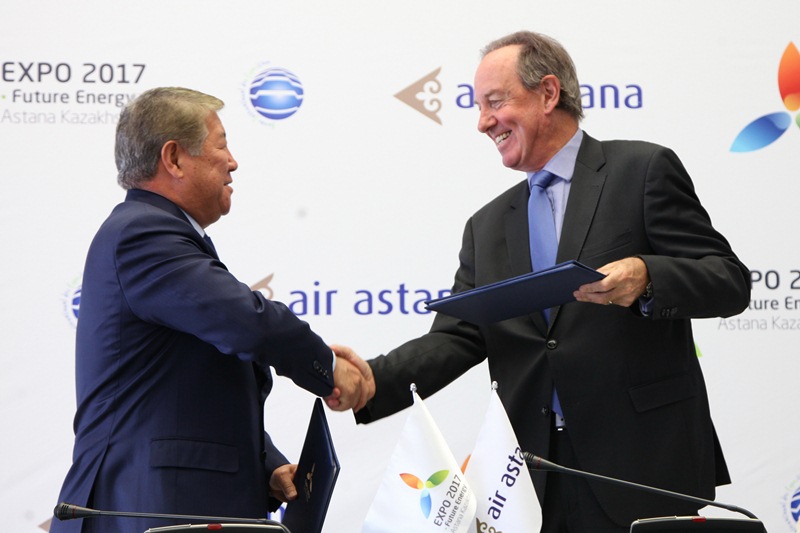 The first EXPO 2017 logo has been emblazoned on the fuselage of an Embraer 190, the result of a memorandum of cooperation between Astana EXPO 2017 and Air Astana, the largest national carrier in Kazakhstan. The signing ceremony was held Aug. 17 with the participation of company president Peter Foster and Astana EXPO 2017 company Chairman Akhmetzhan Yessimov.

All 30 aircraft in the fleet are expected to be marked. The aviation company is the official carrier of the coming exhibition and is also an official partner of the event.

Starting next year, the partners will begin implementing a joint campaign to promote the exhibition in international markets. The Air Astana business network currently includes more than 40,000 agents and passengers traveling with the airline during the exhibition period will be able to visit EXPO 2017 for free.

The exposition will be dedicated to green energy, including energy consumption issues as well as the use of energy-efficient technologies. According to Foster, one of Air Astana’s main goals continues to be the question of reduced emissions into the atmosphere. During the Paris-Le Bourget Air Show in June, Air Astana announced it will purchase an A320neo airbus to reduce emissions by 15 percent.

The aircraft branding is an important step to further develop the expo project and also marks the beginning of the practical means of partnership with Air Astana, said Astana EXPO 2017 public relations department head Sergei Kuyanov.

“EXPO 2017 has several ultimate goals, one of which is the development of tourism in Kazakhstan. We expect more than 2 million tourists to come and this is an achievable number. The Astana EXPO 2017 national company has already signed several agreements with the world’s largest tour operators, which are ready to start sales of tours to Kazakhstan in 2017. They will offer package tours, such as visiting the exhibition and Burabai resort or Almaty city,” he added.

Kuyanov also noted the company is waiting for other contracts with several national companies to be concluded soon and join the EXPO 2017 promotion project.