ASTANA – Despite the gentle temperatures of this early October, winter isn’t far from the minds of Astana residents. And despite the capital city’s growing number of shops and restaurants stocked with food flown in from around the globe, many Kazakhs still follow traditional preparations for the season of scarcity. One of these is sogym: stocking away meat for winter. 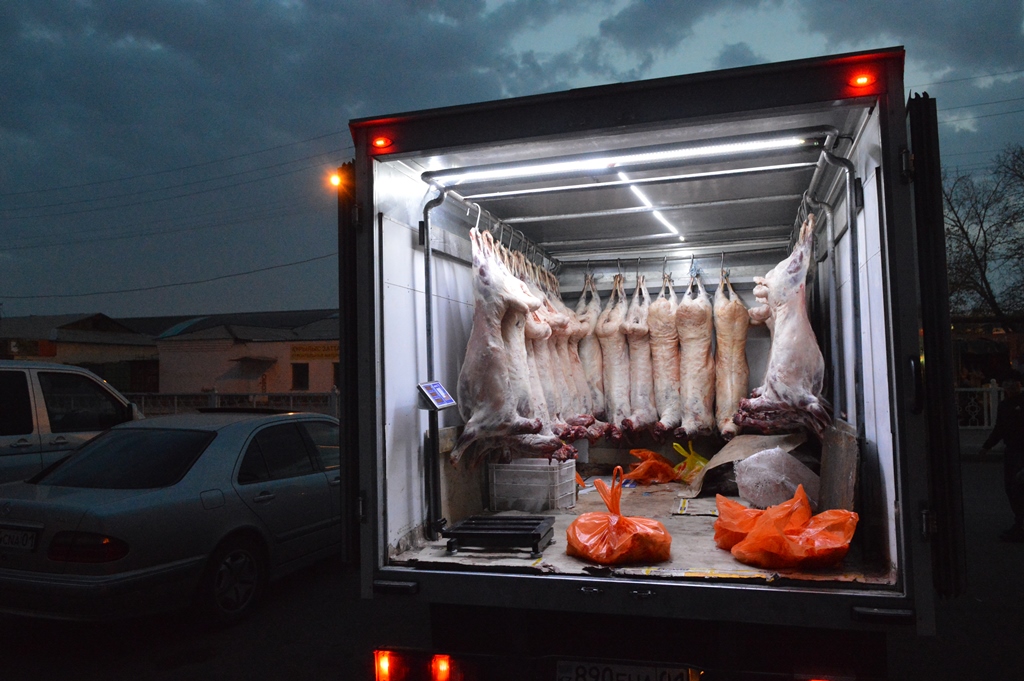 It is dark and surprisingly warm at 6 a.m. Oct. 9, and though the capital’s streets are empty, the grounds of the Alem market are jammed. Workers push trolleys stacked with carcasses, buyers mill and haggle, butchers in waterproof aprons jog through the crowds with massive slabs of ribs slung over their shoulders, hustling to weigh the meat on the industrial scales in the corners of the market before taking inside to be butchered more thoroughly.

The tradition is to buy a whole animal – a whole calf or a whole young horse – fat from the summer and autumn, to keep to eat through the winter months. Sure, you can get meat from the markets all through the winter, but this fat fall meat is better, Kazakhs say, and by buying in bulk, they save money.

A colleague says he bought a 142-kilogramme calf for about 1,000 tenge (US$3.62) per kilo. This is a third less then you would pay for smaller cuts of meat at the market, he says, and a savings of about 70,000 tenge (US$253.81) over the season in exchange for one early morning and a few hours of driving, haggling and butchering. Sometimes, families who can’t afford a whole, well-fed horse on their own (which can cost upwards of $2,000) or who don’t need that much meat, will pool their money to share an animal.

Vendors outside the main market stood around a motley collection of vehicles containing more meat – one fancy refrigerated truck, a few other standard uninsulated models and an old hatchback with an improbable stack of lambs in the back. Vendors standing near two trucks packed with hanging lambs told The Astana Times that though sogym purchases have started now, it is better to buy in November, when the first snow falls.

This is a profitable business, they say, and they get higher prices in Astana. They get up at 3 or 4 a.m. to drive from their village to Astana to sell their meat. Many of their customers will take the meat home and freeze it, but one woman vendor shakes her head at this. “I salt it and make sausages,” she said. “Frozen meat isn’t as tasty.”

Almas Alibekov, 27, and his family will get their sogym meat delivered – his grandfather slaughters an animal for each of his three sons and one daughter every fall and sends the meat to them. The animals are raised especially for their meat, butchered on the family farm in Karaganda region and sent in bags by train or occasionally by bus, to family members a few hours away.

When the meat arrives, the second part of the sogym traditions start: sogym basy, or sharing the bounty with kin. “Of course we organise parties when we get the fresh meat,” Alibekov said in an interview Oct. 14. “We usually invite our neighbours, and then our relatives, and then our friends.” Meat will be set aside for these celebrations; the rest will be separated out and labelled according to part and purpose, Alibekov said. “There’s a tradition, there’s a whole different culture about [dividing the meat]. … My father writes down the names for the meat, organises it, and [stores] it.”

The meat will be stored in the family’s two huge freezers, Alikbekov said. He reckons most Kazakh families keep big freezers for exactly this reason – to hold precious meat through the winter months.