By Aiman Turebekova in International on 20 October 2015 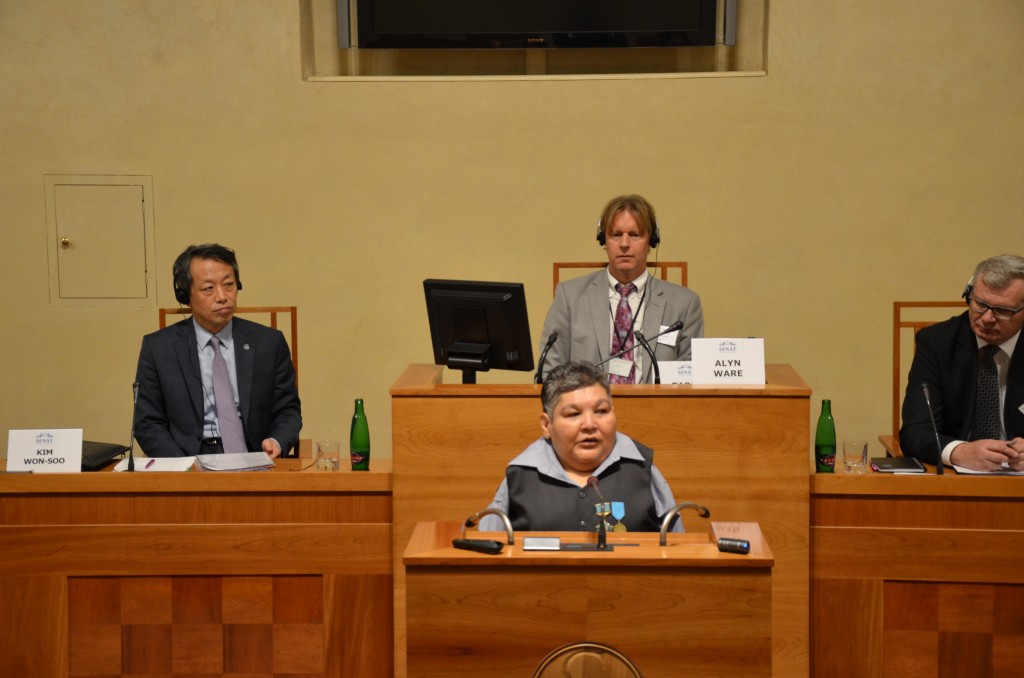 PNND connects a network of more than 800 parliamentarians from more than 80 countries working to prevent nuclear proliferation and achieve nuclear disarmament. Since U.S. President Barack Obama’s 2009 announcement of his long-term nuclear disarmament vision in Prague and the following signing of the 2010 U.S.-Russia START Treaty there, Prague has established itself as a venue for discussion and taking stock of issues related to nuclear arms control, nuclear security, disarmament and nonproliferation.

Members of national parliaments, political leaders, public figures and representatives of the UN, international organisations and the academic community as well as experts in this field attend this conference annually.

This year, special attention was paid to debating the contribution of parliamentarians to nonproliferation, legal frameworks for controlling nuclear materials and fulfilling obligations related to export control mechanisms.

On Oct.16, Victor Rogalev, Secretary of the Committee on Foreign Affairs, Defence and Security of the Mazhilis (lower chamber of Kazakhstan’s Parliament) and member of the Council of the PNDD Forum elaborated on recent international initiatives in this area adopted by President of Kazakhstan Nursultan Nazarbayev.

The parlamentarian stressed the importance of galvanising general public opinion against nuclear testing and in favour of banning nuclear weapons.

“Kazakhstan has a moral right to raise this issue, since approximately 450 nuclear tests were conducted in our country between 1949 and 1989. As a result of these tests more than 1.5 million people in Kazakhstan suffered, and we are still experiencing negative consequences today,” Rogalev highlighted.

Rogalev also presented The ATOM Project (“Abolish Testing. Our Mission”) to the gathering. The ATOM Project is committed to creating global support for a comprehensive nuclear test ban and the complete elimination of nuclear weapons.

Honorary Ambassador of The ATOM Project Karipbek Kuyukov, a painter and long-time international activist against nuclear testing, addressed the conference.

As a second-generation victim of nuclear tests, Kuyukov spoke about his life, his hardship and the tragic fates of his compatriots, who have also suffered from the nuclear testing conducted on the former Semipalatinsk nuclear test site. He also noted that he counted among his friends many people who had worked to mitigate the consequences of the Chernobyl nuclear disaster of 1986, and who were also well aware of the suffering nuclear testing and nuclear accidents could wreak. Kuyukov, who was involved with the famous Nevada-Semipalatinsk anti-nuclear movement in the 1980s and early 1990s, expressed his gratitude to Nazarbayev for his decision to close the Semipalatinsk nuclear test site, which he said inspired him to make his own contribution to the struggle for a nuclear-weapon-free world. He stressed that one of humanity’s main missions on the planet should be to do whatever it takes to prevent ordinary people and future generations from suffering from nuclear testing.

An exhibition of Kuyukov’s paintings, expressing the pain and tragedy of nuclear testing for the land and people of Kazakhstan, was also held within the event, as was a photo series on nuclear security in today’s world.

Kazakhstan has launched a number of disarmament and nonproliferation initiatives, including the successful negotiations to establish a Central Asian Nuclear Weapon Free Zone, the proposal to establish the International Day Against Nuclear Tests (which was passed by the UN in 2009) and The ATOM Project, which was launched at the 2012 PNND Assembly in Astana with Kuyukov appointed honorary ambassador.