ASTANA – Atlético Madrid thrashed Football Club (FC) Astana in front of a home crowd Oct. 21 to claim the top spot in Group C alongside Benfica, who lost to Galatasaray 1:2 the same night. 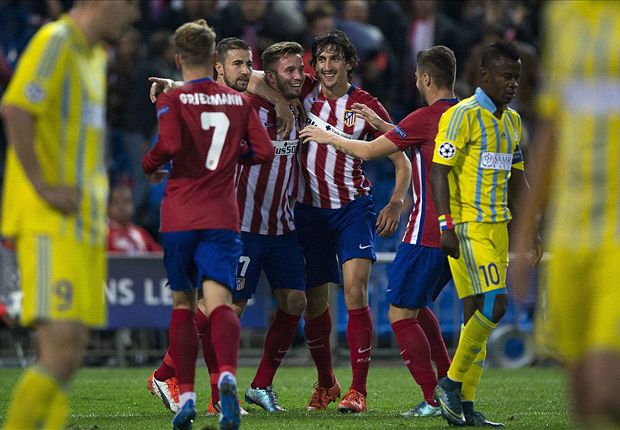 Both teams now have six points and are at the top of the table; however, Atlético beat Benfica on goals difference, seven against five, bringing them to the top of Group C.

Quite remarkable was the fact that it was the 21st win of the last 25 encounters for the Madrid team at home. Astana, however, left behind some of its key players back in Kazakhstan to prepare for the game against Almaty’s Kairat at the Cup of Kazakhstan Game on Sunday Oct. 25, which Astana won 1:0.

Astana’s bench line defence was no match for the Spanish forwards, who gave the impression of being at a practice rather than a Champions League match. In the 22nd minute, Saúl Ñíguez easily heeled one past Astana goalie Nenad Erić after a corner and an assist by his teammate Yannick Carrasco. Jackson Martinez doubled the score six minutes later and that was it for the first half. In the second half, Oliver Torres made it 3:0 after Astana’s defence was outnumbered by an attack initiated by Gabi in the 63rd minute.

Right before the end of the one-sided game, in the 88th minute, Denys Dedechenko scored an own goal and made it 0:4 for Atlético Mardid.

“Atlético dominated during the first half; we made some big mistakes,” Stanimir Stoilov, Astana’s coach said, as quoted by uefa.com. “In the second half we played better. The third and fourth [goals] were our mistakes. We left some players in Astana but even with them, it would have been difficult to win tonight. We will try to play our own game and do it well at home [in the return matches]. Benfica and Atlético are at a higher level, but we will try to be at that same level at home.”

Astana will face Atlético Nov. 3 at Astana Arena, where 17,000 tickets have been sold already.