‘An Illustrated History of Kazakhstan’ Presented in U.S.

By Anastasia Schwartz in Nation on 14 October 2015

“An Illustrated History of Kazakhstan,” a recent book co-authored by several prominent experts and edited by Jeremy Tredinnick, was presented in Washington during an Oct. 6 event dedicated to the celebration of the 550th anniversary of the Kazakh Khanate. 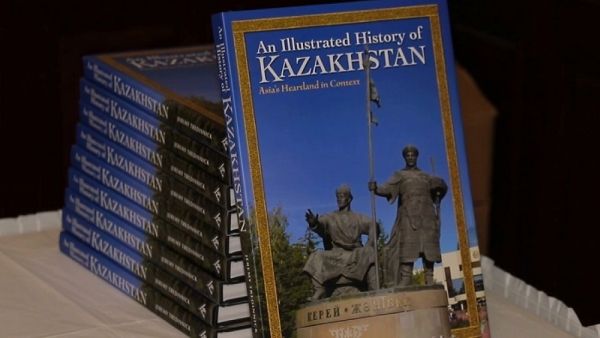 The ceremony followed last month’s visit to the United States by Kazakh President Nursultan Nazarbayev to participate in the 70th session of the UN General Assembly and meet with U.S. President Barack Obama, said Kazakh Ambassador to the U. S. Kairat Umarov at the event. The head of state’s address to the international community during the anniversary carried deep meaning and symbolism, since Kazakhstan is recognised as a successful independent state with prospects of robust growth in the coming years, he added.

“We are proud of our history, the development of which has led us to the peace and good neighbourly relations in which we live. Openness, hospitality, tolerance, perseverance and determination, qualities that we got from our ancestors, have enabled us to succeed in diplomacy and in search for ways of mutually-beneficial cooperation and new friends,” said Umarov.

The event was attended by Principal Deputy Assistant Secretary for South and Central Asian Affairs William E. Todd; representatives of the U.S. Congress; individuals in diplomatic, research and analytic circles and the media. Guests noted such events are useful for promoting Kazakhstan among the U.S. political and business elite.

Renowned archaeologist Michael Frachetti, who conducted his research in Kazakhstan, noted that the land contains 5,000 years of history and the Great Steppe was the home of ancient civilisations. He praised the country’s achievements in the consolidation of society through the study of a common past.

Hudson Institute Senior Fellow and Director of the Centre for Political-Military Analysis Richard Weitz, whose article about the recent history of Kazakhstan was included in the book, cited Astana’s multi-vector foreign policy as an example for many nations in the region.

Kazakh PEN ClubPresident Bigeldy Gabdullin also attended the evening and presented translations of classic Kazakh literature to the American public. “My Name is Kozha” by Berdibek Sokpakbayev and a collection of poems by Mukagali Makatayev will give readers an opportunity to “know the soul and the aspirations of the Kazakh people,” he said.

“An Illustrated History of Kazakhstan,” which uses colourful materials to acquaint the reader with the historic heritage of the country and its people, was presented by the author. He noted the history of the Great Steppe country from ancient times to the present has many epoch-making events and interesting facts and attracts the attention of all who love to study the past.

“Today, Kazakhstan is one of the fastest-growing countries in the world. It is no accident that it is called a regional leader. The country set a goal to become one of the 30 most developed countries of the world by 2050. I believe this ambitious goal will be achieved,” added Tredinnick.