ASTANA – Afghan student Basharat Khan Yousefi has emerged as a hero of the Oct. 13 tram accident in Almaty and is being hailed for preventing more damage and injuries. The scholarship student, who is studying medicine at Asfendiyarov Kazakh National Medical University, is credited with staying in the driverless tram while other passengers leapt off, breaking through the glass panel of the locked cabin door and pulling the emergency brake, Tengrinews and other sources report. 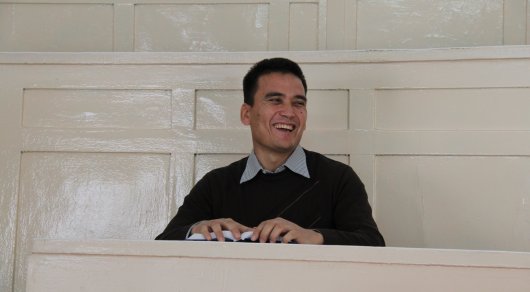 Photo credit: Tengrinews.kz. Basharat Khan Yousefi, the Afghan student who became a hero for stopping a runaway tram in Almaty.

“I was about to get off, but I looked back,” Yousefi said, according to an Oct. 16 Tengrinews story. “I saw women and children crying. I realised that if I leave now, something will happen to them. I tried to open the driver’s door, but it was locked. I started to hit it with my hands and feet. After I broke it, I began to press different buttons. Then I realised that I need to pull the emergency brake.”

Five people were injured, and 14 cars were struck in the accident, which began when the driver got out of the tram to fix a problem while at an intersection. The driver had asked a passenger to push the brake button, according to reports, but the passenger pushed the wrong button and the tram began accelerating without a driver. According to accounts, passengers began jumping off the tram, but elderly passengers and women and children were left inside.

Looking at them, Yousefi thought of his parents, he said. “I remembered my mother. I miss my parents. So I decided for myself, it is better for one person to die than 40,” said Yousefi.

Yousefi is in Kazakhstan through a scholarship programme that provides grants for Afghan students to study in Kazakh universities. The five-year, $50 million dollar programme has already educated nearly 900 students in medicine, engineering and public administration so far and has just been extended, Foreign Minister of Kazakhstan Erlan Idrissov announced at a sideline meeting of the UN General Assembly last month. Yousefi plans to return to Afghanistan to practice medicine after his studies, he told Tengrinews.

Rector of Asfendiyarov Kazakh National Medical University Aikan Akanov told Tengrinews that he would recommend Yousefi for the annual “Pride of the University” honour this year, and called the student a credit to his parents. The university will send a letter to his parents, thanking them, he said. One of the university’s missions is to instill a sense of empathy in their students, and a desire to help people. “[Yousefi] acted like a true future doctor,” Akanov said.

Khiuaz Sazanbayeva, one of the passengers, spoke to Tengrinews about what happened. “We were shocked and confused [afterward], and we did not even ask his last name. I found him and came to the university to say how thankful I am for saving our lives. Allah helped us, and he saved us. We could be dead. He tried so hard to open driver’s cabin, he risked his life. I am amazed by his bravery,” she said. It appears to be other passengers who have reported the story of the student’s heroism, not Yousefi himself.

Of the university’s newest hero, Akanov told Tengrinews, “He is actively involved in the public life of the university, and he has great command of Kazakh and Russian languages. I am proud that he overstepped his personal fears and showed sympathy for the old men and women and children who remained in the runaway tram. He could have jumped, but instead he did everything for other people. I believe that he will make a great doctor and a very good man.”

One woman was seriously injured in the accident and remains in hospital.