By Michelle Witte in International on 11 September 2015

ASTANA – United States security interests in the region are dissipating along with the country’s focus on Central Asian and Kazakhstan policy, said U.S. scholars at the Sept. 9 New Security Trends in Central Asia conference at the Library of the First President in Astana. 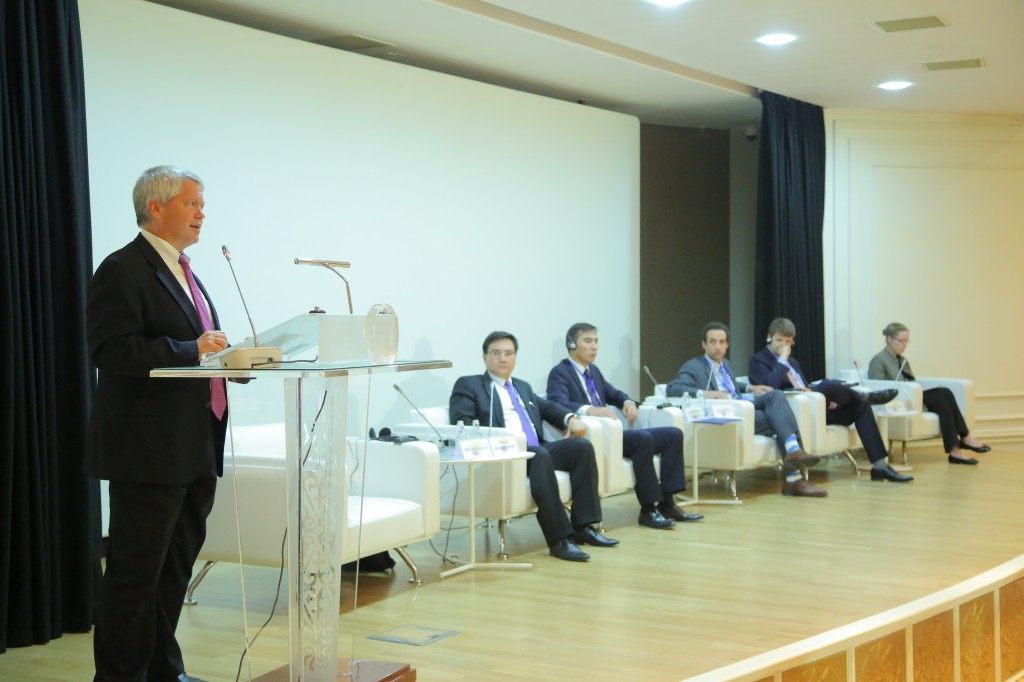 Academic Dean Roger Kangas of the Near East South Asia Centre for Strategic Studies (NESA) speaks at the Sept. 9 conference at the Library of the First President.

“There’s a sense right now, that I think is pervasive in the world that I operate in, that Central Asia is becoming less of a priority for the United States,” said Jeffrey Mankoff, associate director and fellow with the Washington-based Centre for Strategic and International Studies (CSIS) Russia and Eurasia Programme.

American experts Mankoff, Research Associate William Carter from the CSIS, Academic Dean and a Professor of Central Asian Studies Roger Kangas of the Near East South Asia Centre for Strategic Studies (NESA) and Associate Professor of Central Asian Studies at NESA Brianne Todd emphasised that they were presenting expert opinions, not U.S. government policy. Still, a few themes emerged: rather than facing new threats, the region was still grappling with the challenges of decades past; security aside, relationships between the U.S. and the region had not developed significantly and the ability of external actors to influence the region is limited.

“In focusing on the security aspect of the relationship, a lot of the things that underpinned the U.S. policy in the previous era [pre-9/11] fell by the wayside, including a lot of the emphasis on economic reform, liberalisation and democratisation, an area where the countries of Central Asia have not made, for the most part, terrific progress in the years since they became independent,” Mankoff said in his presentation. “And I would argue that that lack of progress is in some ways a liability, both in terms of security issues and in terms of the future of American engagement in the region.”

The U.S., after its engagements in Iraq and Afghanistan, is tired of being involved in overseas conflicts and challenges, Mankoff said. The rationale for U.S. engagement in Central Asia that has operated for the last 15 years is losing relevance and the security and economic case for continued engagement has not yet been made. Unless a compelling case can be made, U.S. engagement will lapse in the post-2015 period – not a good outcome for the region or for the U.S., he said.

Some of this exhaustion may come from dealing with a region that has grappled with the same challenges for 20 years, as Todd noted. “This past week, Dr. Kangas and I were here with many experts from the region to discuss new security challenges in Central Asia. … And what we came to the conclusion of, is that many of the things we are calling ‘new security challenges’ are in fact many of the issues that have been challenges for the past 20–25 years,” she said. “Everything from environmental concerns, such as managing water resources; climate change here in the region; demographic changes resulting from migration and population shifts in these countries; and economic development and integration or lack thereof.”

Since independence, differences between the Central Asian states have grown rather than shrunk, some experts noted, and despite talk of increasing connectivity, deep divisions remain. “We often talk about how regional cooperation is something we need more of … but our group decided that what we’ve seen over the past 25 years, is really regional disintegration,” Todd said echoing earlier messages from regional officials, including Kazakh Foreign Minister Erlan Idrissov. “A lot of the countries in the region are taking [unilateral or bilateral] approaches to these problems … and we’re not seeing the regional approaches that perhaps are needed.”

She also noted that external pushes for regional integration – or any other goal – can’t be successful without regional will. “I think one of the takeaways from this past week has been [is that] the policies of external actors matter less than one would think. Because really [what] it comes down to [is] what are the policies of countries in this region? How can they work together or not work together, and what are the consequences for the countries as a result of that? The U.S. will always have interests in the region…. but that matters less than … Kazakhstan’s interests in the region, or Uzbekistan’s. And I think ultimately, those are the issues that have to be resolved.”

The experts also denied the existence of a new “Great Game” in Central Asia, saying that Russia, China and the U.S. are not vying for interest in the region and that such an effort would be unprofitable for the U.S.

“If we start competing, if we start seeing it as a zero sum game, ultimately we’re at such a disadvantage, it becomes a problematic dynamic for us,” Kangas said in response to questions, noting that the U.S. is in some ways an outsider in the region. “But the U.S. can play a role as an innovator; as an economic partner, when needed; as a supporter of different efforts in the region [on developing] economic ties, developing militaries, developing civil societies. The U.S. has quite a few resources and a good deal of experience in these areas that we’ve applied elsewhere, and it could obviously fit well in Central Asia.”

The U.S. in the past has sometimes made the mistake of seeing things as a choice of one external model or another, he said, and must abandon that in favour of working with states on their unique development trajectories. “I think ultimately what we’re looking at is, can we help make the Kazakh model better? Can we help make the Uzbek model better? Can we work with countries in the region as partners?”

“At the end of the day, the U.S. is not going to be the major driver of political or economic developments either inside the countries of Central Asia or in the region as a whole,” Mankoff said. It’s simply too far away, has too many other challenges and doesn’t have the interests in the region that China – now the largest single trading partner of four Central Asian states – and Russia do.

“However, the U.S. can do things to contribute in a positive way to the development, stabilisation and security of Central Asia,” he said, while not framing its engagement as a struggle for influence with the region’s neighbours.

What the U.S. can contribute, Mankoff said, is “soft infrastructure ideas,” including best practices in border and customs processes, for example, or training on ensuring that contracts are enforced to ensure the legal environment in the region is attractive to business. In many ways, he said, the U.S. and the Chinese approach – which currently focuses on bigger, physical infrastructure projects – are very compatible: one eliminates physical barriers, the other process-based ones. The challenge will be for the two powers to find a way to integrate their two strengths in regional projects, he said.

Cybersecurity is another area in which the U.S. could play a useful role. With an increasingly digitised government and plans to create an international financial centre in Astana, cybersecurity must be given proper attention, Carter said. Governance, energy and finance are some of the areas that draw the most cyber attacks. The U.S. could play a helpful role as a partner for education and training in how to identify and respond to threats. “The U.S. wants to engage with the rest of the world [on cybersecurity],” he said.