NEW YORK – An informal meeting of the United Nations (UN) General Assembly marked the 2015 observance of the International Day against Nuclear Tests on Sept. 10 and highlighted the empirical threat posed by nuclear testing, calling for all countries to sign and ratify the international treaty banning testing. 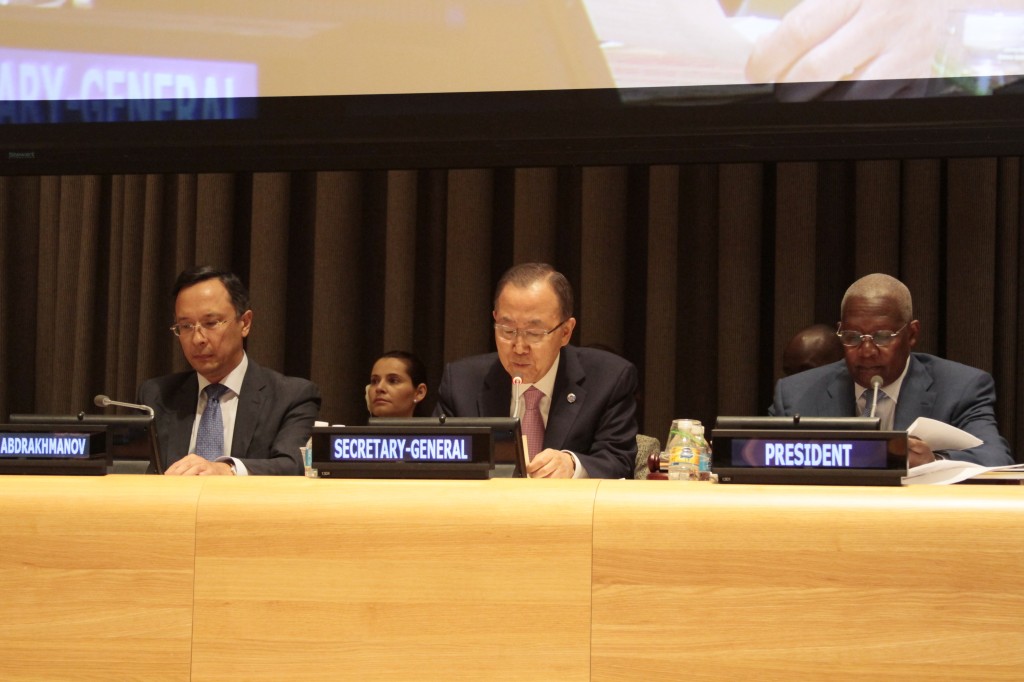 “I have witnessed the lasting societal, environmental and economic damage nuclear tests have caused. Since the first test in New Mexico 70 years ago, the world has endured over 2,000 nuclear tests. Those tests devastated pristine environments and local populations around the world. Many have never recovered from the legacies of nuclear testing – including poisoned groundwater, cancer, birth defects and radioactive fallout. Today, let us also send a strong signal that the international community stands united to take action that will lead us to a safer and more secure world – a world free of nuclear weapons,” UN Secretary-General Ban Ki-moon said at the meeting.

Ban voiced support for Kazakhstan’s efforts in nuclear-test ban activity, emphasising its leading role and the role of the nation’s president in this activity. 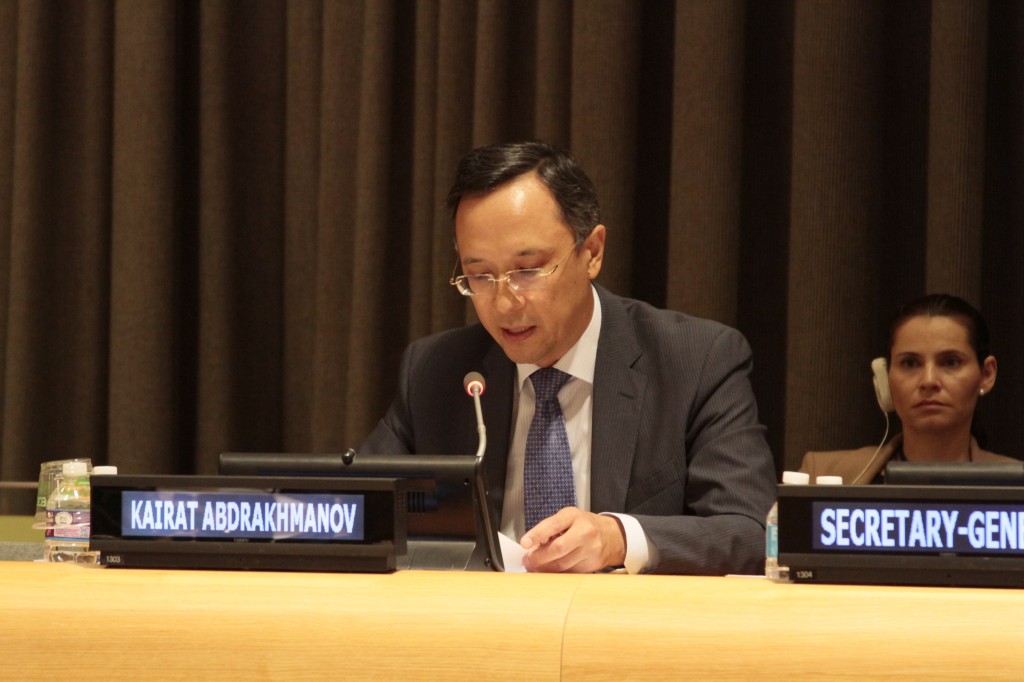 “Despite being the largest producer and supplier of natural uranium in the world, Kazakhstan’s irrevocable refusal to join the nuclear club proves that harmony and cooperation can be stronger armaments for global peace and security than any weaponry,” he said.

The secretary-general noted the Comprehensive Nuclear-Test-Ban Treaty (CTBT), which was adopted in 1996 as an essential building block for achieving this goal as a legally-binding, verifiable means by which to constrain the quantitative and qualitative development of nuclear weapons,must enter into force in order to be truly effective. He called on all remaining nations to sign and ratify the instrument, including China, the Democratic People’s Republic of Korea, Egypt, India, Iran, Israel, Pakistan and the United States.

“Nuclear tests and weapons constitute an existential threat to humanity and contradict some of the fundamental principles of the UN. In its current session, the General Assembly reiterated its firm commitment to the treaty. I would like to use this occasion to stress the importance and urgency of realising the CTBT’s entry into force without further delay,” he said.

The speech by The ATOM Project Honourable Ambassador Karipbek Kuyukov was equally compelling. The famous Kazakh artist and nuclear test victim discussed the suffering and damage caused by nuclear tests to his family and millions of people around the world and called on the participants to achieve the entry into force of CTBT and sign the online petition of The ATOM Project, an campaign launched in 2012 to help galvanise public opinion against nuclear testing and achieve the early entry into force of the treaty.

“It is true that we live in an increasingly complex security environment. Yet we cannot allow the security environment to prevent us from making progress on nuclear disarmament. We should remember the lessons of the Cold War, when arms control agreements provided valuable lessons to reduce strategic tension. We cannot delay in taking the path to nuclear disarmament. We must act with urgency to reach our goal of zero nuclear weapons and we must do so with a sense of compromise and our common responsibility to rid the world of these devastating weapons,” he said. 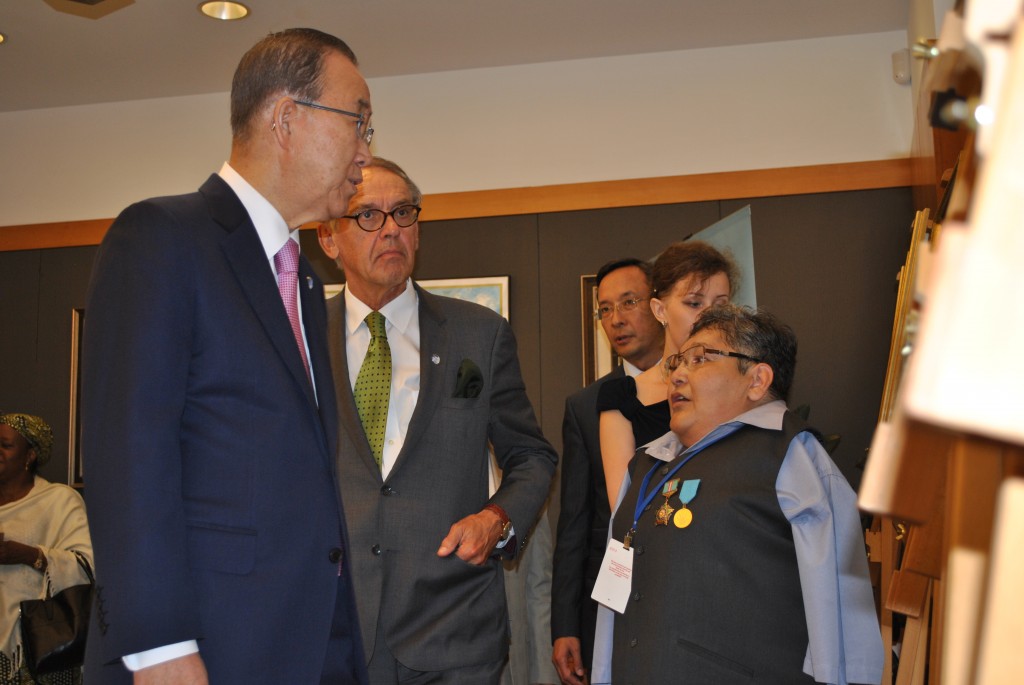 The reception held at the Kazakh permanent mission was the highlight of the day. Abdrakhmanov, a popular figure in local diplomatic circles, aroused the interest of his high-profile guests – including Ban Ki-moon – by posing an informal quiz on nuclear testing. The guests were quick to answer the questions on various stages in global nuclear testing and the impact on the environment.All the guests, including the top UN officials, visited Kuyukov’s exhibit devoted to nuclear test and nuclear test survivors.

At Kazakhstan’s initiative, in 2009 the UN General Assembly declared Aug. 29 as the International Day against Nuclear Tests. The day aims to raise awareness about the dangers of nuclear tests and calls for a total ban. The date marks the first Soviet nuclear test conducted at the Semipalatinsk nuclear test site in 1949, as well as the site’s closure by Kazakh President Nursultan Nazarbayev in 1991. Kazakhstan is seeking a two-year nonpermanent seat in the UN Security Council for 2017 and 2018.