By By Aidar Uteshev in Tourism on 30 September 2015 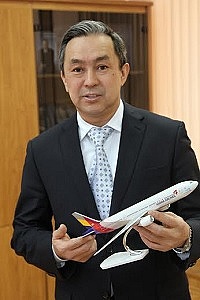 ASTANA – According to international statistics, flying in Kazakhstan has become safer. The percentage of activity compliance of Kazakhstan’s civil aviation has grown by 18 points, said Beken Seidakhmetov, head of Kazakhstan’s Civil Aviation Committee (CAC) on Sept. 23.

“We currently sent a letter to the headquarters of the International Civil Aviation Organisation (ICAO) about readiness to conduct a validation mission in Kazakhstan. We expect a response from them very soon,” Seidakhmetov said.

All restrictions on flights to European Union countries will be withdrawn from Kazakh airlines if the airlines pass the checks. Only Air Astana has such an opportunity now.

“Based on the results of the ICAO validation mission, a significant remark was withdrawn on flightworthy conditions in June of 2014. The percentage of activity compliance of Kazakhstan’s Civil Aviation Committee to ICAO standards has grown from 47 percent (2009 figure) up to 65 percent,” he noted.

The global average index corresponds to 60 percent. Kazakhstan hopes to reach 80 percent compliance by 2020, he added.

“Experts of ICAO Technical Cooperation Bureau are working on various activity directions of the Civil Aviation Committee from 2013 till now. In cooperation with them, all airlines had recertification in Kazakhstan. And if there were 70 airlines in the country in 2009, 45 remained in 2014,” Seidakhmetov said.

Seidakhmetov also spoke about the reconstruction progress of Kazakhstan’s airports.

“Our country has 18 national airports, runways are currently being reconstructed at 13 of them: Aktobe, Atyrau, Kyzylorda, Pavlodar, Astana, Aktau, Almaty, Karaganda, Shymkent, Zhezkazgan, Taraz, Taldykorgan and Kokshetau,” he informed.

The reconstruction of the passenger terminal of Taraz airport is also be completed this year.