By Aiman Turebekova in International on 14 September 2015 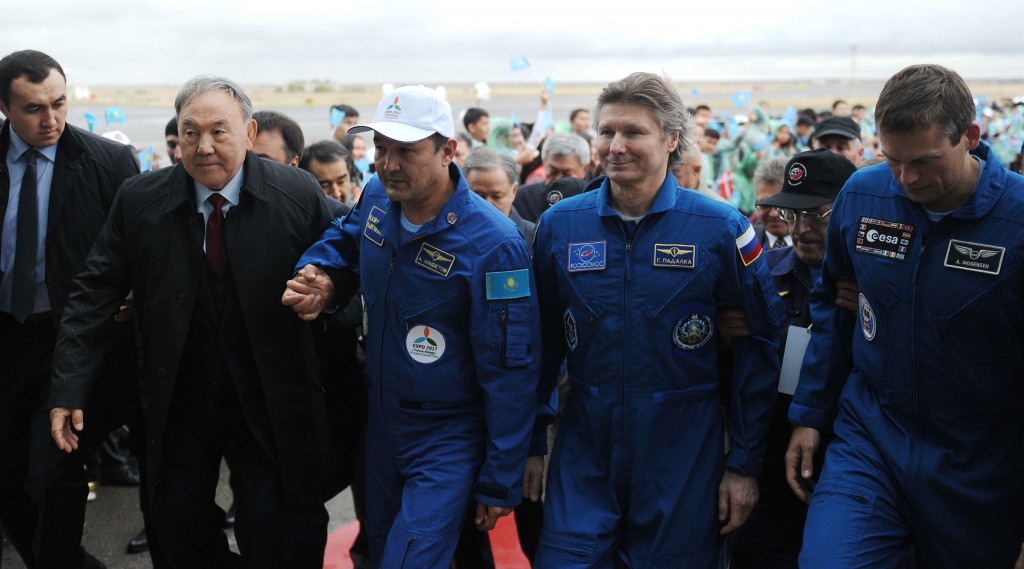 The President congratulated the spaceship crew on their safe return, adding that the flight was a momentous event in the year of the 60th anniversary of the Baikonur Cosmodrome, from which the first man flew into space.

“You all were in our thoughts, as we were waiting for you to return. All of Kazakhstan was waiting for the arrival of Aidyn, who was Kazakhstan’s third cosmonaut to fly in space. It is a very significant event in the anniversary year of the Baikonur cosmodrome. We are glad that the flight went well, and that you are back,” he said.“With support of Roscosmos and the Russian leadership, we trained our cosmonauts Tokhtar Aubakirov, then Talgat Mussabayev, and now Aidyn for space flights,” he said.

According to Nazarbayev, Kazakhstan’s space activities will be further developed. As of today, the country has a number of satellites in the orbit. “I am very happy that you, Mr. President, and Kazakhstan’s citizens have supported and entrusted me to represent Kazakhstan in the international crew. Kazakhstan’s programme of science experiments was fulfilled and I am very glad that Kazakhstan, under the leadership of Nursultan Nazarbayev, is moving forward and developing space activities,” said Aimbetov.

“I am happy to come back to the hospitable land of Kazakhstan,” said Padalka. The Russian cosmonaut had returned to Earth with the record for having spent the most time in space (879 days in orbit) in the total of five space flights. The previous record, 803 days, was held by fellow cosmonaut Sergei Krikalev.

Mogensen, who blasted off from Baikonur along with Aimbetov on Sept. 2, said the crew had “a fantastic mission” at the ISS, whose nine members represented five different nationalities at the time.

“This is a superb example of what can be achieved together when we work together across borders and boundaries,” he said.

“He has been dreaming of flying to space since he was a child,” said the mother of the Kazakh cosmonaut who attended the ceremony in Astana. Aimbetov’s son Amir said thanks to his father’s flight, he became “a super star” among his classmates.

Addressing media questions about the profitability of the flight, the President answered, “The space expenditures will not give immediate yield. However, the whole world is striving to master space. This promises great benefits for scientific and technical progress. Any expense of the state that is directed to space will pay off. The whole world is competing for that and Russia is at the forefront. We intend to develop our space agency and work together with Russia, who is our partner, ally and close neighbour.” 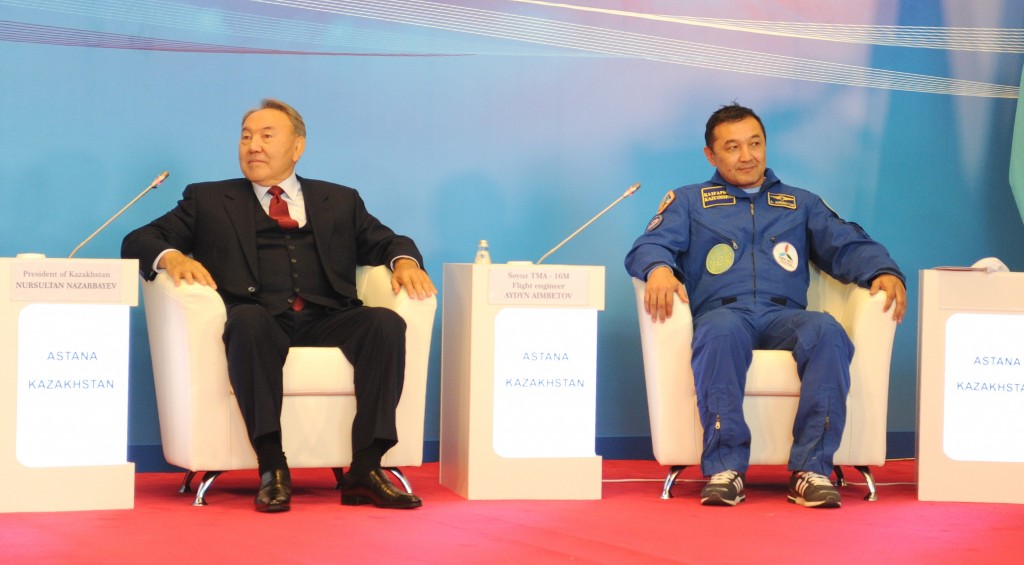 Nazarbayev also added how proud Kazakhstan was to be able to develop its own space programme as not many out of 200 countries in the world enjoy such a privilege.

Talgat Mussabayev, head of the Kazakh space agency Kazcosmos and a veteran of three space flights, first met the cosmonauts on arrival in the Kazakh steppes near Zhezkazgan and later joined the President at the airport. “This day is very remarkable for the country. We are very proud of our zhigit (Kazakh for young rider), who successfully completed his mission. He contributed a lot to the development of the space industry.”

President of the National Centre for Space Technology of the Aerospace Committee of the Ministry of Investment and Development of Kazakhstan Zhumabek Zhantayev told reporters about the Kazakh cosmonaut’s scientific experiments in space: research in ecology, physics and medicine.

“It is yet too early to speak about the results. Aidyn Aimbetov conducted a series of experiments, and the data will be processed on Earth and will be implemented in many fields,” said Jantayev.

As the media and assembled guests were waiting for the arrival of cosmonauts, he explained to assembled journalists which experiments were conducted by the cosmonaut. “Experiments focused on four research areas. Firstly, [it had to do with] monitoring the anthropogenic impact on the territory of the Caspian region and mountainous regions with glaciers, in order to understand the climatic conditions. He also monitored areas crossed by hydrocarbon pipelines. This is an area of the shelf zone, where there is a large number of suspended wells,” Zhantayev said. Aimbetov also conducted research on the Aral Sea area, known for environmental disaster caused by the shrinking sea.

In addition, the Kazakh cosmonaut monitored thunderstorm activity in the upper atmosphere, which could affect the spacecraft’s onboard equipment, and studied biomedical issues, including the body’s response to gamma radiation in weightless conditions. He also worked with other ISS crew members on environmental and psychophysical experiments.

Russian cosmonaut Sergey Volkov, Mogensen and Aimbetov arrived at the space station Sept. 2, two days after their launch, bringing the Soyuz TMA-18M ferry craft Kelly and Kornienko needed for their trip home. After swapping out custom seat liners, Mogensen and Aimbetov were able to join Padalka aboard the TMA-16M spacecraft for their own ride back to Earth after an eight-day stay aboard the station.