ASTANA –Nine-year-old Amir Makhmet celebrated the 550th anniversary of the Kazakh Khanate by doing an equal number of push-ups and breaking his previous record in the process. 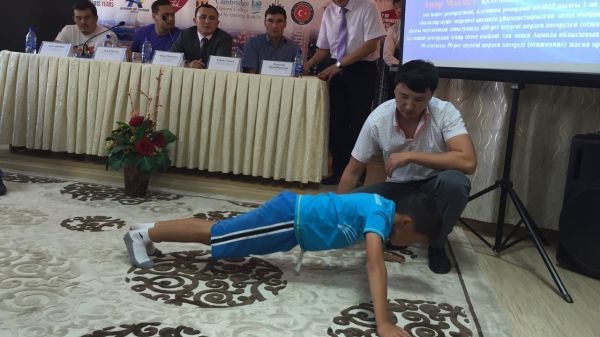 Makhmet is a two-time champion in the Kazakhstan Information Encyclopaedia Directory (KInES), setting his first record at the June 1 opening of the Street Workout summer season. He followed it with a second record at the Akmola region Street Workout championship by performing 50 push-ups in 30 seconds.

“The boy did really well; he is a great example for our young people. It is good that our people are trying to distinguish themselves in a good way. It is great that there is a book – Kazakhstan Information Encyclopaedia Directory – which fixes such records. It is a worldwide practice. I think we need to develop it more,” said Ilyin.

The young athlete’s mother, Kalamkas Makhmetova, was more worried about her son than anyone else in attendance. Makhmet is an impulsive, purposeful and hyperactive child who became seriously involved in sports one year ago.

“My husband is responsible for the child’s activities and it is his merit. They talk a lot and plan something all the time. I’m just watching after his school studies. He got engaged in sport when he was eight years old. The first record was set at that age,” said Makhmetova. “I do not worry about whether he will do the required number of push-ups; I worry about his health at the moment when he will do it and after.”

She added he has repeatedly met with Olympic champions and wants to emulate them. The young athlete likes boxing and judo and has excellent grades in school.

“I hope he will grow up a good citizen of our country and will be a world-famous athlete. When it comes to me as his father, I will always be around, I will support,” said Anuar Makhmetov.

“Today, we are pleased to fix a new record of our young hero. To tell the truth, the whole editorial board and research department is very excited. Kazakhstan’s Record Book focuses on the most positive developments in the life of the Kazakh people. We try to fix records that elevate the spirit of the people and raise human culture. This book, which will be released in two months, includes a photo of Amir. We do not fix records like the biggest number of pies eaten or beer drunk, only sane ones. This book has only the most successful achievements of the people of our society,” said KInES representative Kuandyk Kudaibergenov.