By Nazgul Zhenis in Nation on 11 September 2015

ASTANA – During a presentation before the Kazakh Parliament of the draft law “On amendments and additions to some legislative acts concerning the provision of public services,” Vice-Minister of Investment and Development Saken Sarsenov announced citizens will soon be able to receive all government services in one place as part of the creation of the government for citizens state corporation, reported a Mazhilis (lower house of Parliament) press release. 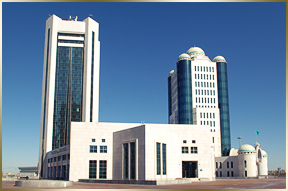 Establishing such an organisation was envisioned in the 100 Concrete Steps programme of large-scale reform announced earlier this year by Kazakh President Nursultan Nazarbayev.

The main objective of the proposed innovations is to legislate the norms regulating the relations connected with the provision of public services to individuals and legal entities according to the one window principle, where all services related to issuing government papers for citizens would occur.

Improving the quality of public services is ensured through the development of two key tools – the citizen service centres (CSC), better known among residents under its Russian acronym TSON, and electronic government, a website offering a wide range of information and documentation services.

CSC provides front office services only, receiving applications and giving results. Creating the government for citizens by merging key service providers in the fields of social welfare services, land relations and real estate registration would allow the office not only to accept applications, but also to perform them, said Sarsenov in presenting the legislation.

“At the initial stage, it is proposed to transfer the most important state services in the sphere of land relations, real estate, social and pension payments [with the use of] the Canadian experience,” he added.

Thus, the draft legislation stipulates assigning organisational functions of the CSC national state enterprise centre for servicing the population by providing public services to individuals and legal entities according to the one window principle. The move would also consolidate the services of the research and production centre of land cadastre, centre for real estate and state centre for pension payments of the state corporation.

Merging four state enterprises into one may result in a reduction in staff, said Mazhilis Deputy Maira Aisina when commenting on creating a new corporation, reported Tengrinews.kz.

“I think there will be a reduction, it is certain, because one corporation will be created from four enterprises. Therefore, all of the supporting positions will be cut. There are administrative bodies and [departments of] budget and finance and personnel in four such entities, so there will be no reduction of [core] employees. That is why there will be optimisation,” she said.

It is difficult to estimate number of employees who will be cut, she added.

“They now need to review the work of all these four state enterprises and conduct an audit. They need to see what staff size will be needed for the new corporation,” said Aisina.

She noted the corporation would presumably begin servicing citizens in the first quarter of 2016.