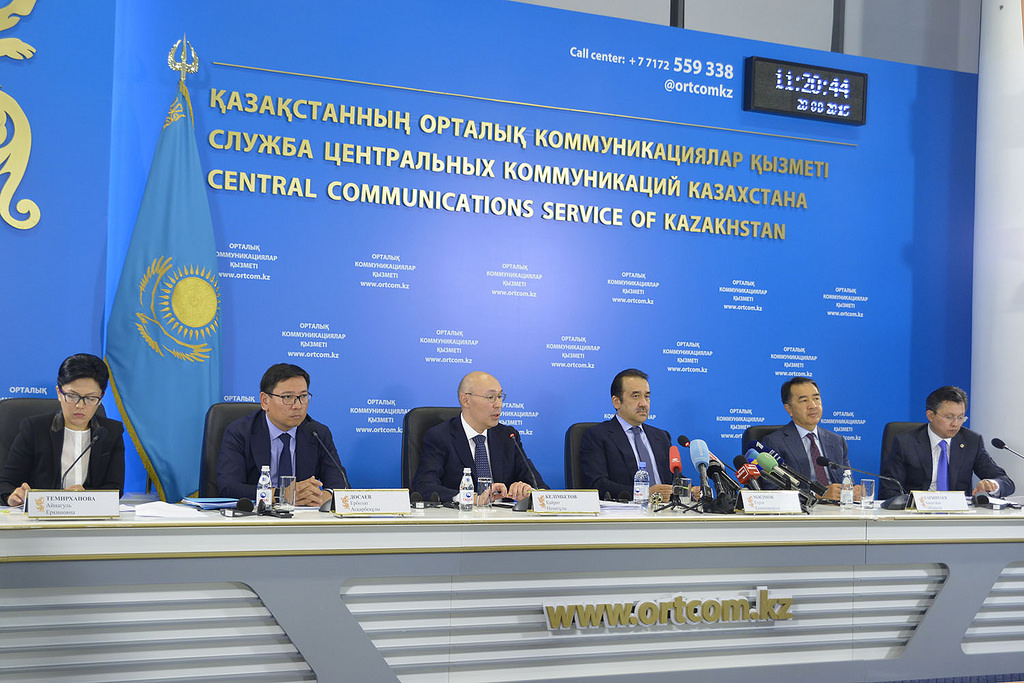 National Bank Chairman Kairat Kelimbetov, the prime minister of Kazakhstan and banking and finance officials address the media on Aug. 20, announcing the switch to a free floating exchange rate.

Kelimbetov stated that the Kazakh people are used to the $100 price for a barrel of oil, but today fewer amounts of monetary funds go into the budget due to the decrease of the cost of goods exported by the state. He noted all social programmes were saved to the fullest extent, prices for social goods are under control and the inflation rate in Kazakhstan won’t exceed 8 percent in the medium term.

Russian President Vladimir Putin put forward a bill which is to create conditions removing the U.S. dollar from Russia’s trade exchanges with countries in the former Soviet Union and creates a single financial market in the territory of Russia, Armenia, Belarus, Kazakhstan, Kyrgyzstan, Tajikistan and other former Soviet countries. A special mechanism would enable the nations to forego using dollars and euros as transaction currency.

The Eurasian Economic Union (EAEU) member states approved a development project in December 2014, specifying use of national currencies. Plans are underway to start mutual exchanges only in national currencies (rubles, Belarusian rubles, tenge and drams) in 2025–2030, according to Vesti.   Fifty percent of payment transactions between EAEU nations (which now includes five countries – Armenia, Belarus, Kazakhstan, Kyrgyzstan and Russia) are currently processed in dollars and euros, which increases the dependence of member states on foreign currency. The project also supposes the creation of a common payment zone, which will enable process payments taking into account compatibility of national payment card systems, such as the Russian National Payment Card System, Belarus Belcard and Armenian ArCa.

Akmola region business people say they must cut jobs given the situation in the financial markets now. They find the current situation quite precarious for their companies, saying the number of orders has decreased and the interest rate of bank loans has become too high for them in such conditions. The businessmen suffer from the daily change in the exchange rate and consider that only exchange office owners stand to benefit from speculating in such an economic situation.

Director of the Macroeconomic research Centre Olzhas Khudaibergenov said he is anxious about the high level of imported goods, noting that in Kazakhstan, 90-100 percent of clothes, 99 percent of footwear, 100 percent of household appliances and 60 percent of furniture come from other countries, according to Kazakhstan Today.

“The Kazakhstan economy has all chances to develop. At first, it is necessary to increase the volume of goods produced in the country. Secondly, Kazakhstan can start a programme of large-scale construction of housing accommodations, because it uses almost 100 percent of Kazakhstan goods and services. The programme can solve many problems, including real growth of household income, decrease of social strain, occupation of the construction sector and building materials production field, growth of economic activity and increase of budget revenues,” he said.

In a Sept. 2 interview, real estate expert Anara, who did not provide her last name, indicated demand is low and the market has stopped.

“Buyers are waiting and I can surely say that the number of sellers is much higher than it was before our country transitioned to a free-floating exchange rate and the number of buyers is much less that it was before. It is well known that people in Kazakhstan usually specify prices for their houses and apartments in U.S. dollars and I was very surprised since Sept. 1 when many buyers began to specify prices in tenge. Also, I can note that prices decreased at least 10 percent,” she said.

Anara noted many ordinary people feel it is better to sell real estate now, because they expect that it will cost less in the future. At the same time buyers are waiting, too. They are sure they will soon have a chance to purchase real estate at lower prices. Construction companies are selling apartments they have already built using old prices, but use new, higher prices for apartments they plan to construct in the future.