Let Our Ancestors Inspire Us, Nazarbayev Says on 550th Anniversary of Kazakh Khanate

ASTANA – Giving due credit to our ancestors’ deeds inspires our responsibility to the future, President Nursultan Nazarbayev said at a special grand meeting dedicated to the 550th anniversary of the Kazakh Khanate. 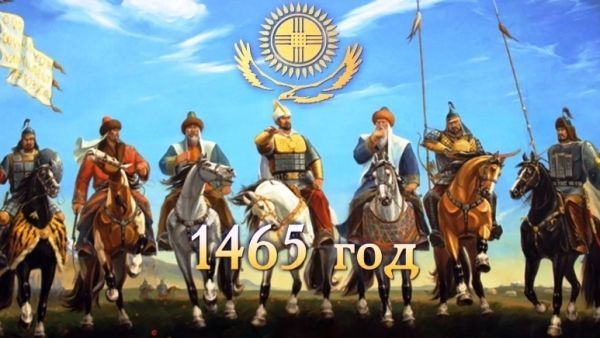 “We have gathered here today for a celebration in order to honour our heroic forefathers but also to highlight lessons that we take from the history of our nation,” he told the audience in Astana’s Palace of Independence on Sept. 11.

Nazarbayev began his remarks by noting that millions of his compatriots, who attended school in the Soviet era, were only taught the “History of the USSR,” which left them with limited awareness of major events in the history of Kazakhstan that did not fit the Soviet narrative. According to him, “the names of our Khans and famous warriors were to be erased from historical memory of our people.”

Indeed, academic studies of the Kazakh Khanate’s history were not welcomed by the Communist Party and at times discouraged, as in the case of Yermukhan Bekmukhanov, who was repressed by the Stalin government for his attempt to provide an assessment of the last Kazakh Khan, Kenessary Kassymov, as an alternative to the official Soviet version.

Nazarbayev said the situation changed upon Kazakhstan’s independence, which opened doors for a revival of academic research into the history of Kazakhstan, with names of key figures from the nation’s heroic past given to schools, universities and other institutions, and monuments to them erected across the country. “The spirits of our brave ancestors, who left a vast homeland to their descendants, has since then inspired a major patriotic revival among our people, especially the younger generation, and filled their hearts with a sense of pride for their national history,” the President said.

The Kazakh Khanate, established in 1465, was the heir to a number of older state entities in the Great Eurasian Steppe, Nazarbayev noted, among them the Saka, Hun, Usun and Kangly states; the Turkic Khaganate; the Kypchak Khanate; and the Golden Horde. Those states developed relations with major powers of Antiquity and the Middle Ages, including China, Iran and the Byzantine Empire, he said. Much of their heritage today is also common to other modern-day Turkic-speaking nations.

The President also emphasised that the dating of the Kazakh Khanate is known from writings of Central Asian historian from that era Mirza Mukhammad Khaidar Duglati, and that it “[attests] that the roots of our nationhood lie deep.”

“Leaving the ulus (state) of Abulkhair, [Genghisid sultans (princes)] Kerey and Zhanibek raised a shanyrak of the Kazakh Khanate in a land between the rivers Chu and Talas,” Nazarbayev said.

“To raise a shanyrak” in traditional Kazakh expression means to call a place home. A shanyrak is the wooden crown of a yurt, through which light enters and smoke escapes. In traditional Kazakh communities, the yurt itself would often be repaired and rebuilt, but the shanyrak would remain intact, passed from father to son upon the father’s death. A family’s length of heritage could be measured by the accumulation of stains on the shanyrak from decades of smoke passing through it, so an ancestral home is often referred to as a “black shanyrak”. The great symbolic meaning of the shanyrak to the modern heirs of the nomads is illustrated by the fact that a stylised version of the shanyrak is in the centre of the national emblem of Kazakhstan and also forms the main image on the flag of Kyrgyzstan.

Nazarbayev continued with a condensed review of the timeline of the Kazakh Khanate’s territorial expansion and its consolidation and defence against external aggression under Khans Kassym, Khaknazar, Tauekel, Yessim, Zhangir, and Tauke throughout the almost three centuries of its existence as a single state.

“Following the end of Tauke’s rule [in 1718], the people’s unity weakened and division into zhuzes (tribal confederations) and clans rose,” Nazarbayev said. This was used by the aggressive Dzungar Khanate, a neighbouring state of militant Mongolian-speaking nomadic tribes, and they intensified their campaigns to conquer their neighbours and deprive Kazakhs of pastures vital for their nomadic economies.

In response to a national tragedy of major Dzungar aggression of 1723–1725, the Kazakh resistance was consolidated under the leadership of Abulkhair Khan, sultan Abylai, batyrs (generals) Kabanbai, Bogenbai, Nauryzbai, Malasary. Prominent figures of the era, senior judges Aiteke Bi, Tole Bi, and Kazybek Bi played a major role in uniting Kazakh forces against the invaders. As a result, the Kazakhs claimed a number of important victories against the Dzungars, including at Anyrakai in 1730.

“Valuing unity and joining forces, the Kazakhs managed to liberate their homeland,” Nazarbayev underlined. But the unity did not last and the Kazakh Khanate effectively ceased to exist as Senior, Middle and Junior Zhuzes began to each elect their own khans.

“As a result of the divide and conquer policy based on colonialism, Kazakh lands ended up as the Russian Empire’s colony,” the President said. Later, “despite severe suffering and losses that accompanied the October Revolution; the Civil War [in Russia]; the Great Famine of 1930s, which halved our population; and the Great Patriotic War [against the Nazis], which served as a great test to our manhood, the Kazakh people always maintained a formidable spirit and strong national identity.”

Today, Kazakhs enjoy peace and prosperity in an independent state of their own, in harmony with compatriots of 130 ethnic backgrounds that call this country home, he said.

Nazarbayev warned against complacency. “There is no secure future for a nation that only boasts its history,” he said. “Every generation should add to the glory of its ancestors.”

Modern Kazakhstan continues to do this, notably by successfully formalising its 14,000 kilometres of border – historically recognised but never confirmed with documentation – with Russia, China and all other neighbours, he said.

Having built a dynamic free market economy and attracted hundreds of billions of dollars in foreign direct investments, modern Kazakhstan has secured a new standard of wellbeing for its citizens, Nazarbayev underlined. “More than 1,300 schools, 1,250 healthcare facilities and 4,000 preschools were built in the years of independence,” he said, as well as cultural and sport facilities. The government has issued more than 10,000 scholarships under the Presidential Bolashak programme that enables young people to study in top universities worldwide, he noted.

According to the President, the solid legal framework for the nation’s progress was laid out by the Constitution of 1995. Kazakhstan has now established itself as a respected international actor, confirmed by successful chairmanships in international organisations, as well as the emergence of the Eurasian Economic Union and the progress of the Conference on Interaction and Confidence-Building Measures in Asia (CICA), an initiative of Kazakhstan, towards a full-fledged international organization.

Another manifestation of independent Kazakhstan’s accomplishments is the new capital city of Astana. “Construction of a new capital proved to the world that Kazakhstan is capable of executing very complex tasks,” Nazarbayev said. The nation’s next challenge is hosting EXPO 2017 in Astana, a major international event that will highlight science, technology and industrialism, he said.

The President called Kazakh history a “unique element” in the mosaic of Eurasia’s past and present civilisations. “Invisible links connect us with the thousand-year-long history and the modernity of China, the past and present of many peoples in the Middle East, as well as other parts of the Asian continent. … Linguistic and cultural ties relate us to our brotherly Turkic peoples living from the Arctic to the Mediterranean,” he said. Kazakhstan has also travelled a joint historical road with Russia for hundreds of years, he noted.

Nazarbayev stressed that Kazakhstan was committed to “nurturing and strengthening friendship and mutual trust with our neighbours, building good relations with all countries of the world,” and said he believed that Kazakhstan’s contribution to global development in the 21st century would be recognised by the world.

“Independence is a blessing, and our mission is to keep it forever. Our Fatherland is inhabited by spirited, free-minded, creative people, who are capable of overcoming even the toughest challenges. Let the spirits of our heroic ancestors support us in reaching our great goals,” the President concluded.