Kazakh Secretary of States Participates in Women’s Congress in Tokyo

in International on 3 September 2015

Secretary of State of Kazakhstan Gulshara Abdykalikova paid a working visit to Japan Aug. 28-29 to take part in the Second Congress of “The World Assembly for Women in Tokyo: WAW! 2015,” the Akorda reported. 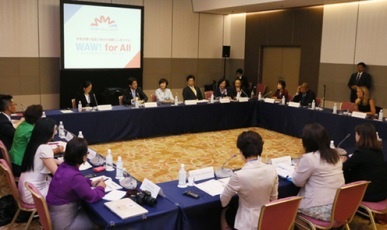 Participants of the World Assembly for Women 2015 meet in Tokyo.

In her speech, Abdykalikova made a report on Kazakhstan’s progress in addressing gender issues and equality between men and women in the socio-political, socio-economic, cultural and humanitarian spheres. She emphasised the political will of President of Kazakhstan Nursultan Nazarbayev, who actively involves women in the state and public administration.

“In the Kazakhstan 2050 Strategy President Nazarbayev calls ‘to actively involve women in the state and public governance … to create favourable conditions for opening and doing business by women.’ With the strong support of the government, today women of Kazakhstan have become a driving force of the economy,” she said.

“Kazakhstan actively promotes gender issues in its foreign policy. The issues of promoting gender balance and women’s participation in governance were included into the agenda of Kazakhstan’s chairmanship in the Organisation on Security and Cooperation in Europe (OSCE) in 2010 and the Organisation of Islamic Cooperation in 2011. The post of the Special Representative on Gender Issues was established during Kazakhstan’s chairmanship of the OSCE,” said the Kazakh secretary of state.

Starting from 2012, enhancing women’s economic potential has been discussed at the Astana Economic Forum, which is held annually in the capital of Kazakhstan, Abdykalikova said.
She proposed to use the forum as an international platform to discuss the economic advancement of women.

Abdykalikova invited the participants to the international specialised exhibition EXPO 2017 in Astana, as well as suggested to discuss the development of green business on a special panel session at the next World Conference for Women in Tokyo in 2016.

The participants of the congress expressed interest in establishing cooperation with Kazakhstan and promoting international dialogue to enhance the role of women in society.
Later, Abdykalikova held a meeting with Japanese Minister of Foreign Affairs Fumio Kishida. The sides discussed deepening bilateral cooperation.

On the first day of the visit, Abdykalikova met with Prime Minister of Japan Shinzo Abe and held talks with Minister of Education, Culture, Sports, Science and Technology of Japan Hakubun Shimomura. They discussed developing cultural and humanitarian cooperation, including updating an existing cultural cooperation agreement and increasing sports-related cooperation.

During the meeting with the Minister of Women’s Empowerment, Administrative Reforms and Civil Service of Japan Haruko Arimura, the sides discussed cooperating to implement Kazakhstan’s 100 concrete steps under the country’s Plan of the Nation in the fields of administrative management and public service. Also, the parties suggested exchanging information concerning the promotion of women’s economic activity.

New opportunities for Japanese businessmen that have been opened thanks to the implementation of Nurly Zhol programme were discussed at the meeting with Minister of Economy, Trade and Industry of Japan Yoichi Miyazawa. The sides discussed the participation of Japanese companies in the international exhibition EXPO 2017. The Japanese pavilion is expected to be one of the EXPO’s largest. At the meeting with Japanese Minister of Health, Labour, and Welfare Yasuhisa Shiozaki, the parties discussed establishing contacts in the sphere of medicine, as well as studying Japanese experience in compulsory medical insurance for the population.

Abdykalikova also met with the leadership of the Agency for International Cooperation of Japan and representatives of the Organisation for Economic Co-operation and Development (OECD) in Tokyo. The sides discussed cooperating and exchanging experience for the development of the KazAID [Kazakh official development assistance programme] and use of the OECD expert potential for the analysis of economic development policy of the country.