ASTANA – Students throughout the country gathered for a traditional ceremony Sept. 1 to celebrate the beginning of the new school year. Approximately 336,000 children went to their schools for the first time. 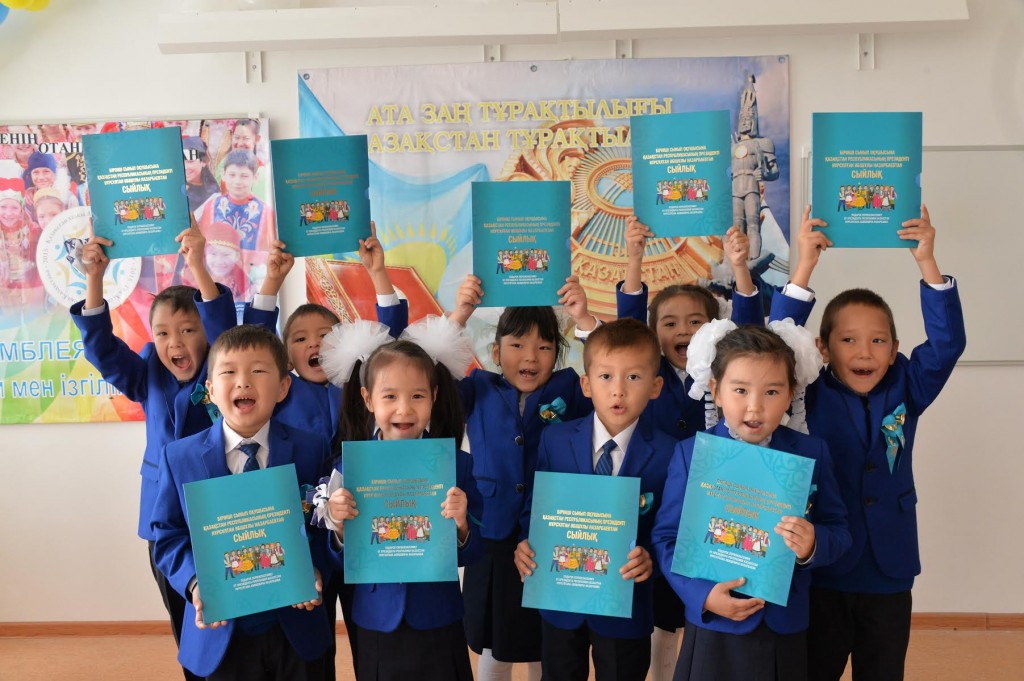 Each of the first graders received a copy of “Menin Otanym – Kazakhstan” (“My Motherland – Kazakhstan”), a gift presented on behalf of President Nursultan Nazarbayev, according to the Ministry of Education and Science. The vividly-illustrated book contains information about state symbols, the national idea of Eternal Nation (Mangilik El), a map of the country and descriptions of Astana, Almaty and every region. The publication gives the youngsters information about Kazakh nature and climate and the most beautiful places in the country. A separate chapter is devoted to the 550th anniversary of the Kazakh Khanate and educators of the Kazakh people. The total number of students this year amounted to more than 2.6 million studying in 7,500 schools. In addition, 157 new schools will be put into operation and 85 percent of all buildings will provide hot meals for children. Minister of Education and Science Aslan Sarinzhipov has promised that during the year the number of schools in emergency condition will be decreased to 66, with 250 to be totally repaired. The capital launched three new schools this year including the Astana English School for gifted children, where lessons will be conducted in Kazakh and English. Sarinzhipov attended the opening ceremony of the 11,765-square metre building, which is designed for 1,200 individuals. Students at all schools and colleges were greeted by more than 1,300 representatives of the Kazakh Armed Forces who gave lessons of patriotism and courage, peace and accord. The classes were organised on the initiative of the ministries of defence and education and science. The first day of September is also known as Knowledge Day, a time when students and their parents traditionally give flowers to teachers. The term, which originated in the Soviet Union and was established in 1984, plays a large cultural role in post-Soviet countries. Students attending not only schools, but those enrolled in other educational institutions such as colleges and universities, begin their studies that day.