By Kamila Zhumabayeva in Culture on 8 September 2015 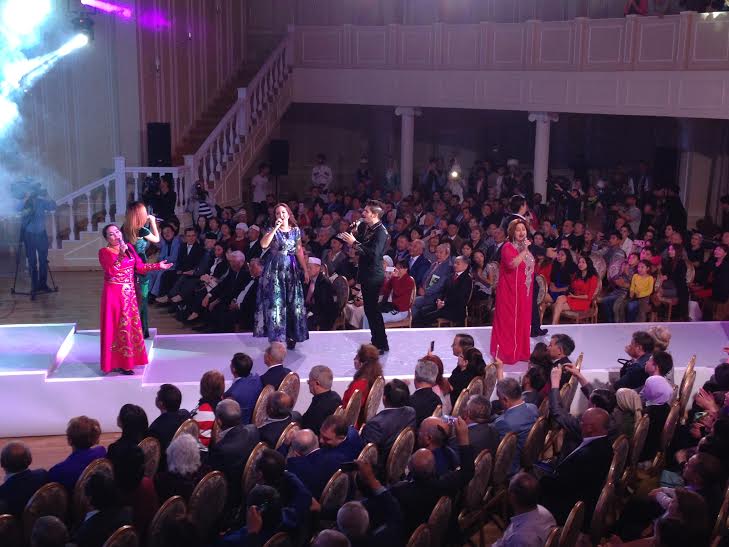 Singers perform at the opening gala of the festival.

“The event aims to popularise Kazakhstan in the world and the revival of Kazakh ethnic music and choreography,” national Delphian committee board member Kuralai Tuspakova told The Astana Times.

The festival is uniting creative people from different parts of the world to popularise and preserve national identity through culture, language and history, noted Advantour.com.

“Foreign participants were performing the Kuanysh waltz. Each performer will take its phonogram away with them and will include it in their performing repertoire. Like that, 12 countries will know that the country has this kind of composition by Shamshi Kaldayakov,” said Tuspakova.

Representatives from more than a dozen countries participated – Bulgaria, China, Hungary, Kazakhstan, Moldova, Mongolia, Russia, Syria, Ukraine and Uzbekistan, as well as from a number of Russia’s regions such as Bashkortostan, Dagestan, North Caucasian Federal District, Karachay-Cherkessia and Kabardino-Balkaria,

In the first round, participants perform either compositions of Kazakh musicians or Kazakh folk music. Those who advance to the second tier will present musical compositions of the country they represent, according to Advantour.com.

“We cannot measure arts, but looking at how participants communicate with each other now, how they have a live interest and observed what was going on at the opening ceremony, like the presentation of Kazakh ancient instruments and Desht-i Kipchak film,” said Tuspakova.

In an atmosphere of genuine friendship and freedom of art, the festival promises to be bright, intensive and memorable for everyone who attends, wrote Advantour.com.

Tuspakova believes the continuation of the event will be very interesting. New connections will be established, existing relations will become stronger and everybody will know more about one another.

According to Tuspakova, the festival is regulated by government decree. The Sagadat Nurmagambetov Charity Fund is the event coordinator and only founder financing the event.

The Kazakh Ministry of Culture and Sports, Kazakh National Delphian Committee, a coordinator of the project which serves as a directing team to handle the creative work and selecting contesters, and Sagadat Nurmagambetov International Charity Fund were among the festival partners.

The fund plans to make the gala an annual event and with the support of the ministry of culture and sports and the Assembly of the People of Kazakhstan, it will have a long life, said Tuspakova.