By Malika Orazgaliyeva in International on 15 September 2015

ASTANA – The 59th session of the International Atomic Energy Agency (IAEA) General Conference opened in Vienna on Sept. 14 and will continue until Sept. 18, the press service of the Kazakh Ministry of Foreign Affairs (MFA) reported.

This main annual meeting of delegations from the agency’s 165 member states will consider the IAEA Annual Report, which covers the agency’s activities in peaceful nuclear energy use, international cooperation in ensuring nuclear and radiation safety, nuclear safeguards and the nuclear nonproliferation regime. Delegates will also discuss the programme and budget of the IAEA and the staffing of the Secretariat.

“The Agency has so much to offer in this area that I often summarise our work as Atoms for Peace and Development,” Director General of the IAEA Yukiya Amano said in his opening remarks distributed by the organisation. “We make peaceful nuclear technology available to improve the welfare and prosperity of the people of the world.”

After welcoming Guyana, the Republic of Djibouti and Vanuatu as newest member states of the IAEA, Amano pointed out the clear links between the work of the IAEA and the 17 new United Nations Sustainable Development Goals that are expected to be adopted by governments in New York next week. “Areas covered by both include energy, food security and nutrition, human health and environmental protection, as well as the management of water resources,” Amano said. “I very much welcome the fact that there is explicit recognition in the new development goals of the importance of science and technology in advancing development.” 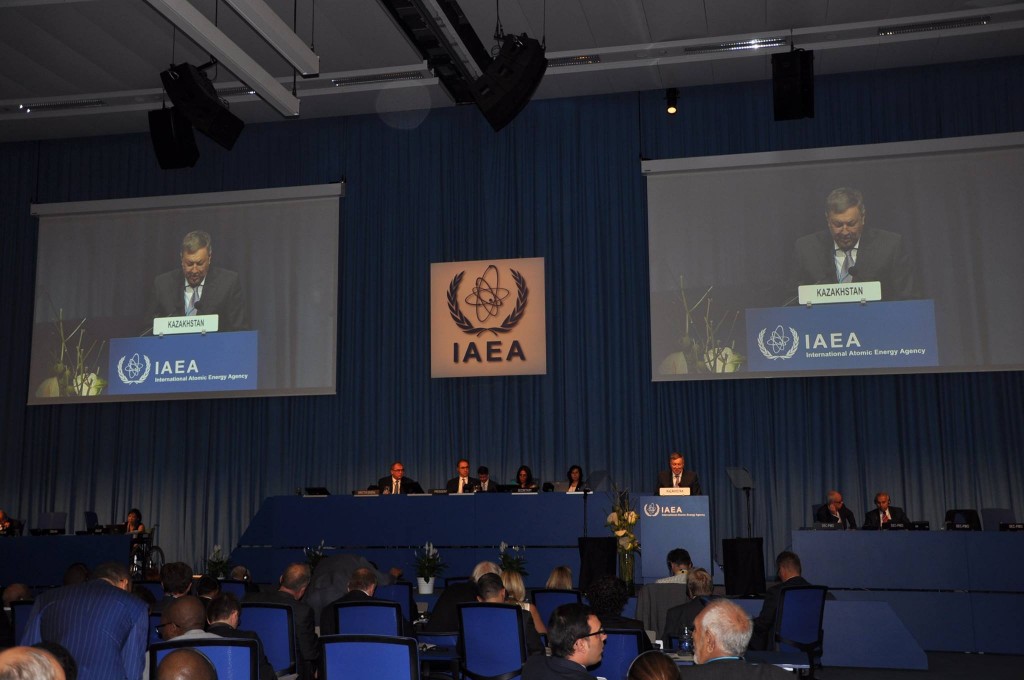 Amano outlined numerous activities that the IAEA has been engaged over the past year, including the efforts to establish an IAEA bank of low enriched uranium in Kazakhstan.

“Last month, I signed a Host State Agreement and a related technical agreement with the government of Kazakhstan, establishing an IAEA bank of low-enriched uranium (LEU) in that country,” Amano continued. “A second technical agreement was concluded with the operator of the IAEA LEU Bank. This is a significant step forward. The legal framework is now fully in place and we can move toward full-scale implementation.”

“The IAEA LEU Bank will serve as a supply of last resort. It is a mechanism to provide confidence to countries that they will be able to obtain LEU to make fuel for nuclear power plants in case of an unforeseen disruption to their supplies that cannot be remedied by commercial means. I am grateful to the government of Kazakhstan for hosting the IAEA LEU Bank,” Amano added.

A delegation from Kazakhstan led by Minister of Energy Vladimir Shkolnik is taking part in the conference. It includes senior representatives from the MFA, President of national atomic company Kazatomprom Askar Zhumagaliyev, officials from the National Nuclear Centre of Kazakhstan and other entities.

At the opening of the general conference, Shkolnik reflected on the achievements of his country in nuclear disarmament and nonproliferation and the effective cooperation between Kazakhstan and the IAEA on peaceful nuclear energy use. Participants were informed about Kazakhstan’s plans to develop its national nuclear energy programmes and atomic sphere. The member states’ attention was also drawn to the initiatives of President of Kazakhstan Nursultan Nazarbayev in the field of nuclear nonproliferation, including The ATOM Project.

On the sidelines of the conference, Shkolnik held bilateral meetings with Amano as well as with the heads of delegations from Iran, the U.S., Japan, France, Russia and India to discuss a wide range of bilateral and multilateral cooperation issues, including preparations for the international specialised exhibition EXPO 2017 in Astana. Kazatomprom is hosting an exhibition at the Vienna International Centre for the duration of the conference.Overall, several dozen exhibits and side events are scheduled from Sept. 14 – 18.