By Claire McCarthy in Nation on 27 September 2015

ASTANA – Makhabat Sadykova, a 20-year-old student in the School of Humanities and Social Sciences at Nazarbayev University, was introduced to the disturbing criminal activity of human trafficking in 2013 during the university screening of an anti-trafficking film, “Dark Side of Chocolate.”

“I knew about people exploiting others for free labour,” she said, “but I then became aware it was a business … a serious business that people control others to make money. I wanted to find out more about the situation in Kazakhstan.” 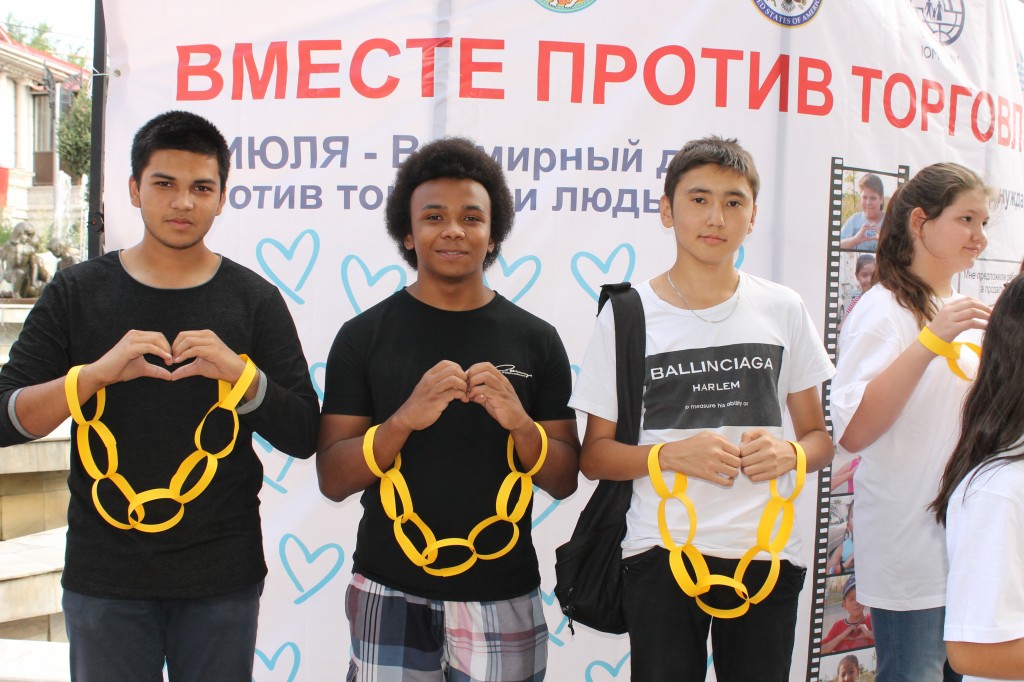 Students from Almaty on World Day against Trafficking

Even after discussing the subject with fellow classmates who were doing research on child trafficking and despite it being the world’s second biggest business after drug trafficking, there was a distinct lack of information in the country.

“The disproportionate distribution of money in this country may lead to exploitation. You find naivety and lack of education are generally the main reasons behind becoming victims of exploitation,” said Sadykova.

Since its emergence 17 years ago as the new capital of Kazakhstan, Astana has seen accelerated growth in its size and population. This rapid development attracts large numbers of workers from rural parts of the country and its neighbouring nations, all hoping to find employment and a better life in the big city. Yet there is a dark side to this expansion. Many of these hopefuls are falling victim to labour and sexual trafficking – lured by promises of jobs and higher wages. In 2014, the government identified 74 trafficking victims, 68 of whom were Kazakhstan citizens from outlying areas. Between 2004 and June 2015, the International Organisation for Migration (IOM) office in Kazakhstan has assisted 1,235 victims of trafficking.

Organisations such as the IOM, together with the government, are intervening. Kazakhstan is a destination country for victims of trafficking (VoT) due to its economic situation and geographical location, but the government, supported by nongovernmental organisations, is taking steps to tackle the problem, said Anissa Kuanova, NGO coordinator for the counter- trafficking department of IOM Astana.

“In 2009, the Ministry of Justice launched a pilot project to establish a government-funded shelter in Astana. Since 2015, the Department of Labour and Social Protection under the Akimat of Astana has supported this shelter through social contracting and IOM funds for the assistance of victims of trafficking at this shelter,” she said. 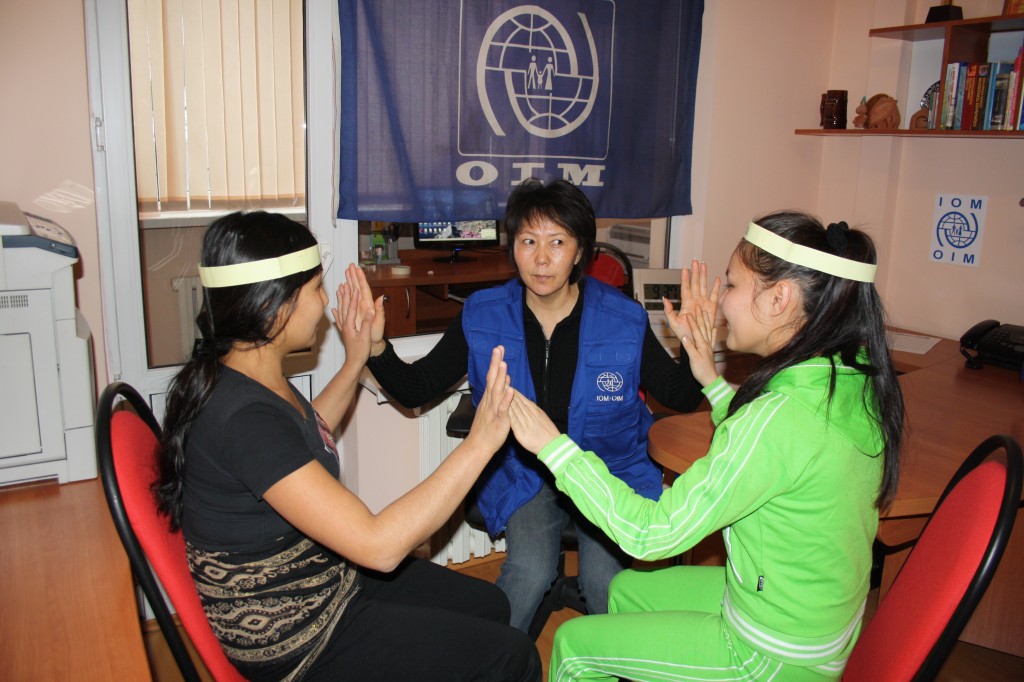 Playing a psycological game with victims of trafficking

Kazakhstan has three shelters for VoTs and two established by the IOM, in Almaty in 2006 and Koskhetau in 2008. Kuanova added that in 2015, nearly 80 percent of all VoTs were foreigners, who need to stay in safe, temporary places where their individual needs are met.

“It is necessary to take into account the great traumas each victim undergoes and long stays in an unknown country (waiting for identity documents to be issued or criminal cases to be finalised). In connection with this, the NGO’s social workers in shelters will be able to provide full rehabilitation opportunities for victims,” she explained.

“In cooperation with our NGO partners in 14 regions of Kazakhstan, we provide not only accommodation in places of safety (shelters), but also other needs, like medical and psychosocial support, skills development and vocational training, reintegration assistance and the options of voluntary, safe and dignified return to countries of origin,” she said.

Additionally, in close cooperation with the Ministry of Internal Affairs, the IOM supports the toll-free hotline 11616 to provide information on human trafficking and migration issues. Around 4,000 calls were made in the last three years. Furthermore, in 2013 the IOM launched the open Facebook group “Let’s Stop Trafficking in Kazakhstan!” to support social interaction among NGOs, journalists, government agencies and the general public in combating human trafficking and promoting access to social services for trafficking victims in the country.

Since beginning its work in Kazakhstan, the IOM has built a positive relationship with many organisations throughout the nation, including universities such as Nazarbayev University, L.N. Gumilyov University, Eurasian National University, KAZGUU and D. A. Kunayev University in Almaty.

David Cronin, a teaching fellow for the last five years with the Nazarbayev University Foundation Programme (NUFYP), coordinates charity collections at NU as well as raising awareness of the shelter and human trafficking in general. Upon entering his apartment, it is easy to see the high levels of contributions he receives. His spare room is filled to the ceiling with donations of clothes, toiletries and random knickknacks; his balcony is piled high with shoes and in the corner stands a brand new bicycle left by an ex-colleague to sell to raise money for the charity. As he was involved in donating clothes to orphanages in Hungary and the rural poor in China, he researched similar possibilities in Kazakhstan the moment he arrived and was soon contacted.

“Due to this, I work not only in the university but also with the wider international community,” said Cronin. “I support the charity work mainly by collecting clothes, but also through educational activities such as relevant films and speakers. I have also been in local schools to raise awareness of human trafficking.”

Despite these efforts, it is sometimes difficult to raise awareness, as students are busy with academic studies and adapting to a new life style, he said. Students do get involved with the initiative by coming to events and attending lectures on related topics, however, helping directly is more complicated.

“It is difficult to have direct contact, which you can do with local orphanages, for example, due to the vulnerability of victims. There is the need for security in case of legal cases or attack from traffickers wanting to ‘reclaim their property,’” he said.

Sadykova started supporting the charity by raising awareness of clothing collections and film showings. Sadly, over the last few years she has noticed an increase in the city’s unofficial newspapers advertising the services of prostitutes and this summer was driven to discover more about the problem by taking a course in Thailand and Singapore. She discovered how widespread the problem was but also how much was being done to combat this business, particularly in the Far East. She has returned to Kazakhstan and hopes to continue supporting the work that is being done in the country.

“The mentality of society needs to change for this to come to an end,” said Sadykova as she went on to describe the nuances of the problem. “In Kazakhstan, there is the idea that the women should be at home and not work. They do not receive a good education, which makes them more vulnerable. This, along with their lack of knowledge of the world, leads them to be targets for traffickers.”

Kuanova is hopeful, however, pointing to recent success stories from the capital shelter.

“After leaving the shelter, many VoTs keep in touch with NGOs. Children are returned to education and others are found places in orphanages,” she said.

Sadykova recalled how one VoT was re-issued documents and returned to Ukraine, where the woman had been taken, and was finally reunited with her family after being exploited in Kazakhstan for more than 15 years. Although the country has already made progress in combating human trafficking, a more concerted effort is required, she believes.

“Education is needed to counter the presumption promoted that the problem does not exist or is minimised in Kazakhstan,” said Cronin, adding people can get involved by “donating what you can, attending events, giving money, becoming informed, asking questions of representatives such as the Mazhilis deputies or Nur Otan party members and finally trying to educate others.”