SANTIAGO – Some of South America’s largest nations, including Brazil, Argentina and Chile, announced this month that they will participate in EXPO 2017 in Astana. The announcements followed a Sept. 14-18 visit to South America by EXPO 2017 Commissioner and First Deputy Minister of Foreign Affairs of Kazakhstan Rapil Zhoshybayev. 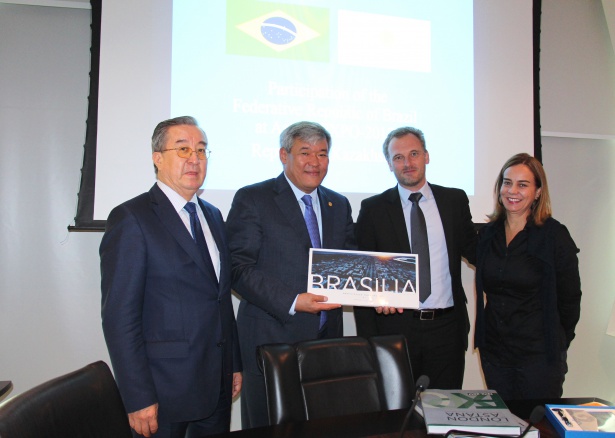 Receiving his Kazakh counterpart, Deputy Minister for External Relations of Brazil Hadil da Rocha Vianna welcomed the Central Asian nation’s growing role in the international community and highlighted the relevance of the “Future Energy” theme for EXPO 2017. Brazil is keen to take part in the exhibition, as Brazil pays much attention to developing green energy and is a significant producer of biofuel, he said.

Today, there are 2,756 power plants operating in Brazil. The backbone of power generation in Brazil is hydro-electrical stations that produce 85 percent of the country’s electricity, with the rest produced by wind, nuclear and thermal (coal) power stations.

During a meeting with Executive Secretary of Brazil’s Ministry of Mines and Energy Luiz Eduardo Barata, officials discussed bilateral cooperation in science and technology. Barata briefed his Kazakh guest on key trends in power generation and consumption in Brazil. About 45 percent of energy and 18 percent of the fuel consumed in the country are renewable, he said. Barata underlined that participating in a Future Energy-themed expo fits well with the goals of Brazil’s Programme for Incentives for Alternative Electric Energy Sources – Proinfa.

The visit also helped explore the potential of Kazakh-Brazilian cooperation in tourism. Today, Brazil is one of the leading centres of tourism in the world. According to estimates, more than 6.4 million tourists visited Brazil in 2014. Brazil offers many options for tourist experiences, ranging from eco-tourism to various types of cultural tourism. Annual income from the tourism industry exceeds $6.7 billion. Brazil’s experience in running its tourism industry can be useful for Kazakhstan, they agreed. 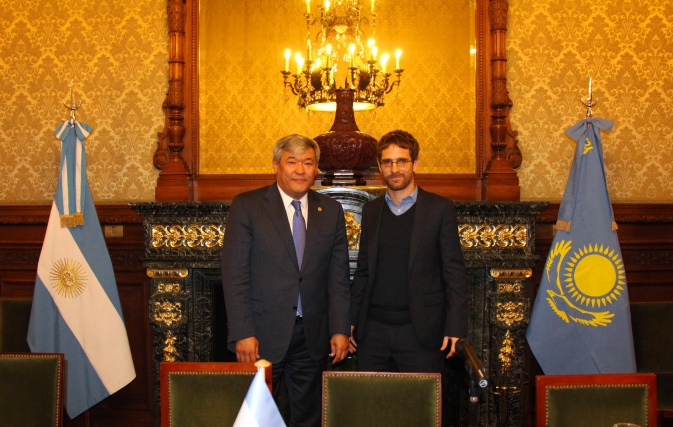 It is with this mind that Zhoshybayev’s meeting with Executive Secretary of Brazilian Ministry of Tourism Alberto Alves was arranged. The EXPO Commissioner and his counterpart examined avenues for cooperating on joint projects and promoting Kazakhstan’s tourist attractions to Brazilian audiences and signed a memorandum on cooperation in tourism between the Astana EXPO 2017 National Company and a Brazilian tourist association.

At the next meeting at the APEX Brasil Trade and Investment Promotion Agency, a number of Brazilian companies showed interest in participating in the expo in Astana. APEX Brasil played a major role in Brazilian presentations at the three previous expos, in Shanghai 2010, Yeosu 2012 and Milan 2015.

The next stop on the EXPO Commissioner’s Latin American tour was Argentina, where on Sept. 16 and 17 Zhoshybayev visited the country’s Foreign Office and made a presentation concerning EXPO 2017 for Argentine companies interested in launching joint projects with Kazakh partners.

At a meeting at the Argentine Ministry of External Relations and Worship, Brazilian Undersecretary for Investments and Trade Agustin Wydler announced his nation would participate in EXPO 2017. Brazil’s achievements in advancing the production and use of wind, solar, geothermal, biomass and nuclear energy could be represented in Astana, the Argentine diplomat said.

The presentation about the expo to a group of senior managers of state and private companies in Buenos Aires also confirmed their interest in contributing to an Argentine presence at the Astana exhibition. Argentina’s major state energy corporation, ENARSA, showed interest in presenting its work on the development of energy-saving technologies, and Director Fernando Salim noted the company’s willingness to invest up to $10 million to implement green technologies at the Astana airport terminal in the run up to the expo.

In Santiago, Chile’s Minister of External Relations Heraldo Munoz Valenzuela received the Kazakh delegation. The Chilean diplomat said his country was planning to be present at EXPO 2017 in Astana. According to the minister, his office and the PROCHILE national authority on promoting Chilean exports and attracting investments would soon formally confirm the country’s participation in the upcoming event.

The Kazakh officials told their counterparts that the government of Kazakhstan looks forward to increased bilateral contacts and cooperation and handed a letter from President Nursultan Nazarbayev to his Chilean counterpart, Michelle Bachelet, with congratulations on Chile’s national day, which is marked Sept. 18.