ASTANA – The ATOM Project team jointly with the Federation of Judo Veterans of Astana held a minute of silence and released 500 white balloons to commemorate the victims of nuclear tests on UN International Day Against Nuclear Testing Aug. 29 in front of the Alau Sports Palace Alau where the Judo World Championship was being held. 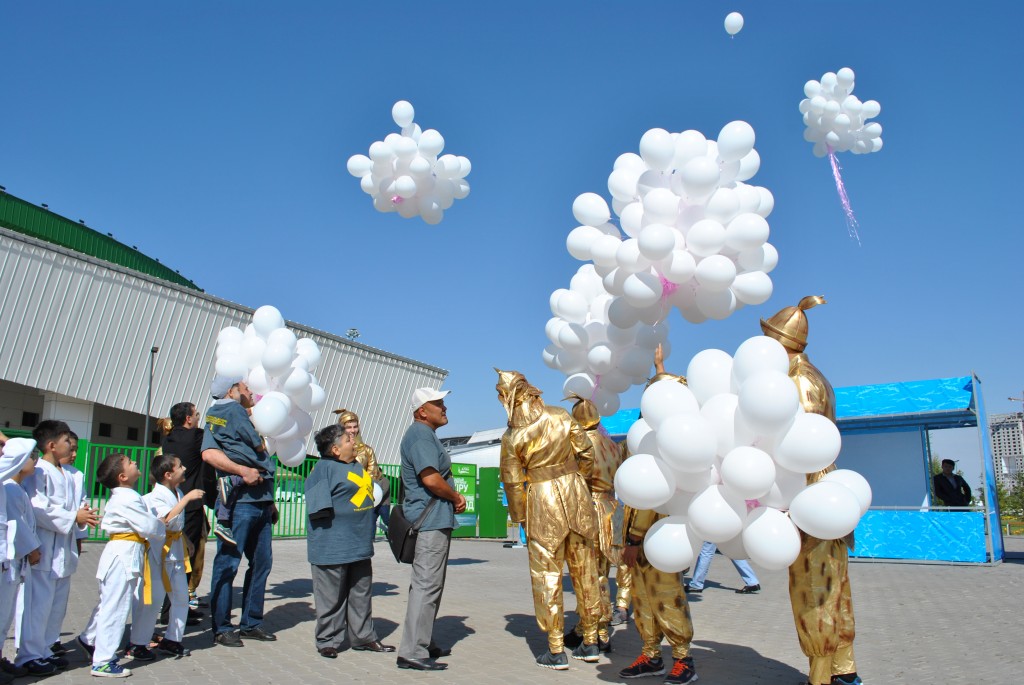 Balloons are released during the Aug. 29 ceremony to honour the victims of nuclear tests.

The tradition for the Aug. 29 minute of silence is to observe the moment at 11:05 a.m. because at that time the clock hands show a letter V, which stands for victory.

“August 29 is a dark day in the history of Kazakhstan. On this day in 1949, the first nuclear test shattered the windows of innocent citizens near Semipalatinsk,” said Honorary Ambassador of The ATOM Project Karipbek Kuyukov in his address. “Our people have suffered through 40 years and we have become yet stronger as a nation. It is almost impossible to count all the victims of the nuclear explosions today, all the dreams that never came true, all the children that didn’t live to see another day, I think we owe to all of them just a minute of our time, one minute of silence.”

However, that same date Aug. 29 also symbolises a fresh, bright start for the Kazakh people. On this day in 1991, President Nursultan Nazarbayev issued a decree to shut down the Semipalatinsk test site and stop the suffering of more than a million who had perished and suffered and countless others who are still witnessing the consequences of the Soviet nuclear legacy.

“Just like after a dark night, dawns a bright morning, we hope after a horrible past humanity will dawn the new bright nuclear-weapon-free future for the sake of our children,” said Roman Vassilenko, chairman of the International Information Committee of the Kazakh Foreign Ministry. “These white balloons symbolise the joy and victory and bright feelings of good will and I am very glad that we gathered here today, with our children that are about to commemorate the victims of nuclear tests by releasing the white balloons into the sky.”

“The 500 white balloons symbolised the nearly 500 nuclear tests conducted at the Semipalatinsk polygon from 1949 until 1989,” said Nurlan Amanov, chairman of the Revision Committee of the Federation of Judo Veterans of Astana and one of the organisers of the event, as white balloons were released.

Launched on Aug. 29, 2012 by President Nazarbayev, The ATOM Project was supported by more than 200,000 citizens from over 100 countries, with the ultimate goal to ensure early entry into force of the Comprehensive Nuclear-Test-Ban Treaty (CTBT).

The CTBT would ultimately ban all nuclear explosions in all environments for either military or civilian purposes. The treaty was adopted by the UN General Assembly in 1996 but can only be enacted should eight specific countries – China, Egypt, India, Iran, Israel, North Korea, Pakistan and the United States – both sign and ratify it. Although 183 states have signed the treaty and 164 ratified it, those nations have not yet followed suit.