By Kamila Zhumabayeva in Culture on 8 September 2015

ASTANA – Despite pressure from local law enforcement bodies, guitar and saxophone performers play and sing in an underground crossing and near the Yessil River. They are not always banished, except possibly during official events and checks, yet busking is quite difficult for most of them. 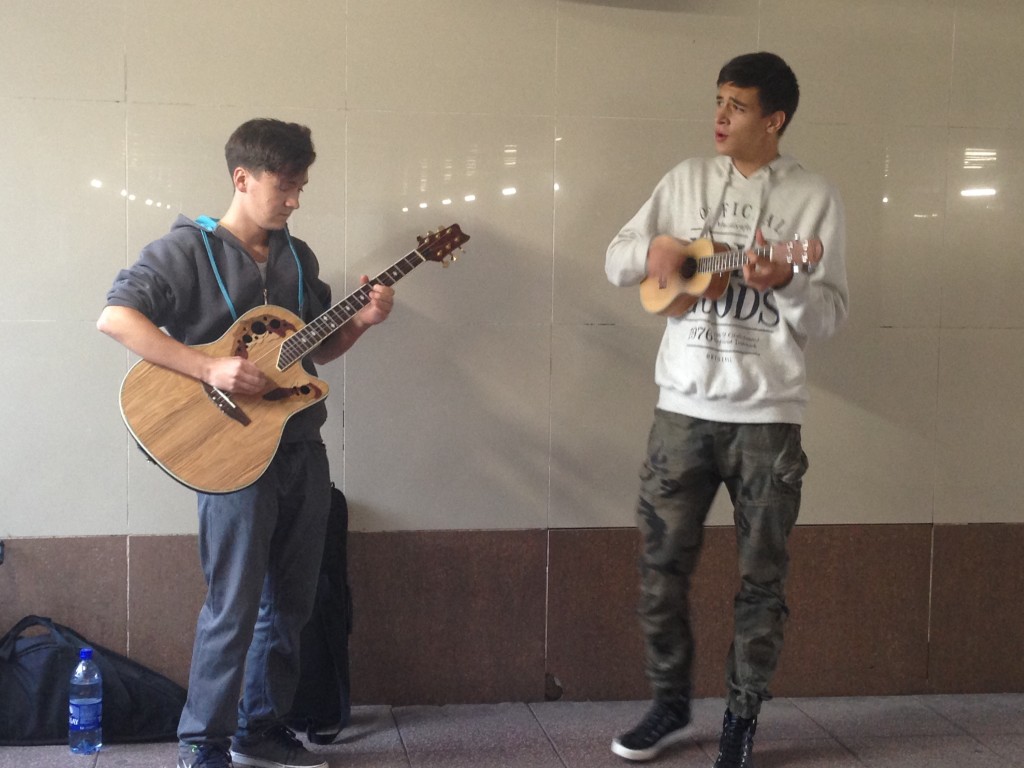 “Depending on the season or their moods, buskers in Astana scatter along the river and perform in groups or alone. Some of them have their own band names and performance seasons, during which jamming sessions get quite big,” ex-musician and bank worker Dmitry, who only gave his first name, shared with The Astana Times.

The summer season can gather around a thousand people in the city’s central park. Performers can be youngsters and older folk.

“It is all for art’s sake. Everybody just enjoys and is passionate to perform,” said Dmitry.

The busker community is a small one and many of the artists know each other and can perform together without conflict, he added. Some of them quit busking, however, return to the area where they previously worked or get a new job.

“I know a lot of street musicians and bands were recording their own music some time ago, but had to drop because of conflicts with local music recording studios,” said Dmitry.

At times, young buskers encounter aggressive behaviour from people who look for an argument and a fight for money and territory.

“It is often very disturbing when those guys approach to threaten us, because that is what they usually do,” he stressed.

Another problem is street police officers who often remove musicians under a law that impedes begging.

“They don’t understand that we are not here to beg; they are restricting our freedom of expressing our art and sharing it with people. Beggars are those who put their hands forward and beg you to give them money. How is expressing your feelings through performing outdoors begging?” Dmitry argued.

His busker friend Elizaveta Li is a talented guitar player who used to perform for donations. 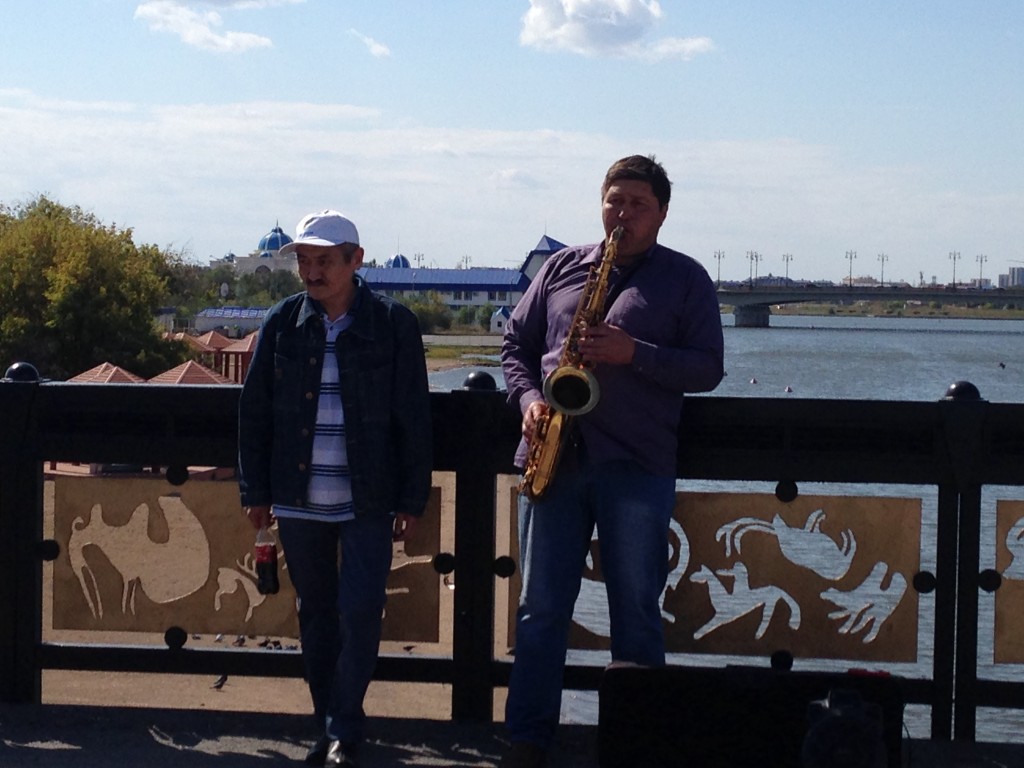 Spartak Ensebayev playing a saxophone on the bridge leading to Astana’s Central Park.

“We were short on money, as I have been living here without my father and my mother and couldn’t cope on my own,” Li told The Astana Times. “I like music and express myself through it, so it is a pleasure and benefit at the same time.”

She started performing when she was four years old and professionally from the age of 14-15. Li was invited to play in many of the city’s concerts during that time, accompanying on guitar as she sang popular hits in English.

“Any time is good to busk if you are in a good mood and ready to sing. A lot of old and young people and children stop to listen. Once, even foreigners stopped to talk and sing along and play,” she said.

“My mother knows how I can busk with luck, even though it is Astana, and she is okay with it,” said the street musician.

In her opinion, the way a busker presents him or herself affects what people will think about buskers in general.

“If you are artistic and creative, people will like you more than if you are dull. What I like the most about busking in Astana is there are a lot of artistic people here; they start gathering out of somewhere when I perform,” she said.

Vilgelm Kovtunov busks with his band regardless of whether people like them or give them money.

“Busking is fun for us; besides, we get to practice playing music and get a little money for it,” he said.

Kovtunov believes their busking can make people who like to hear the band performing even happier and impart some positive energy into the lives of those passing by.

“Everyone has a different taste in music, so how people react to our performing depends on them. Some treat us like beggars and give money because of pity,” the busker said. “How much we earn per day depends on whether people like how we play, but money is not our first goal; giving good mood to ourselves and people is.” 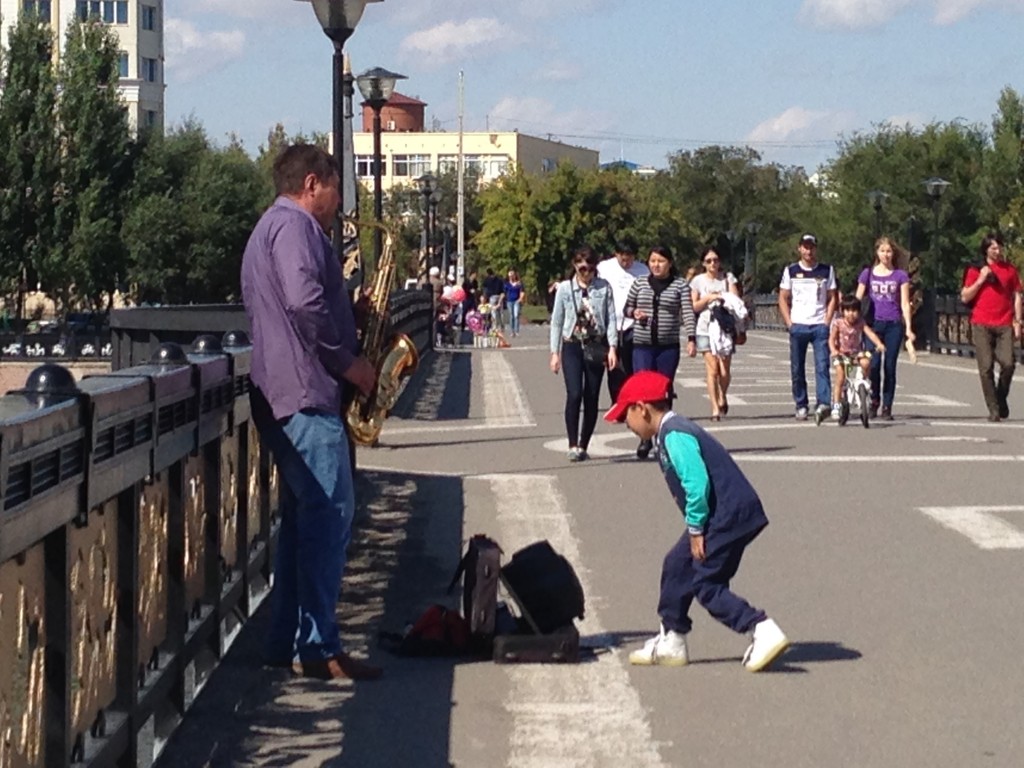 Spartak Ensebayev is perhaps one of the most talented and busy buskers in the city. People often respond well to his performances and feedback is mostly positive and even respectful. He plays saxophone on his portable boom box as the background for Russian and Kazakh language folk songs.

Ensebayev earns quite a bit for a street busker compared to others performing solo or in bands, as his average donations per day approach 10,000 tenge (US$41.60).
“I work a lot to earn like that and rarely can someone perform on a street because it is not that easy,” admitted the busker.

Ensebayev has been performing on streets for about 15 years, but the outdoors is not his constant venue, as he also plays in cafés and restaurants and for banquets, weddings and parties. The saxophonist also travels to Borovoe to perform.

“It’s impossible to be employed permanently in restaurants because they attempt to vary artists as often as possible, so that a customer does not get bored with the same performer,” said Ensebayev. “Therefore, it is hard for a musician to keep a stable job; you have to move around and your legs earn you the money.”

For those in the city, daily summer life includes seeing and hearing street artists and musicians. It is a small but developing culture.