ASTANA – As Astana expands, traffic jams are becoming routine and trips through the small but growing capital are taking longer and longer. With the city’s population increasing, a number of new systems are being put in place to alleviate road traffic, provide alternatives to travelling by car or by bus and keep people comfortable on public transportation. 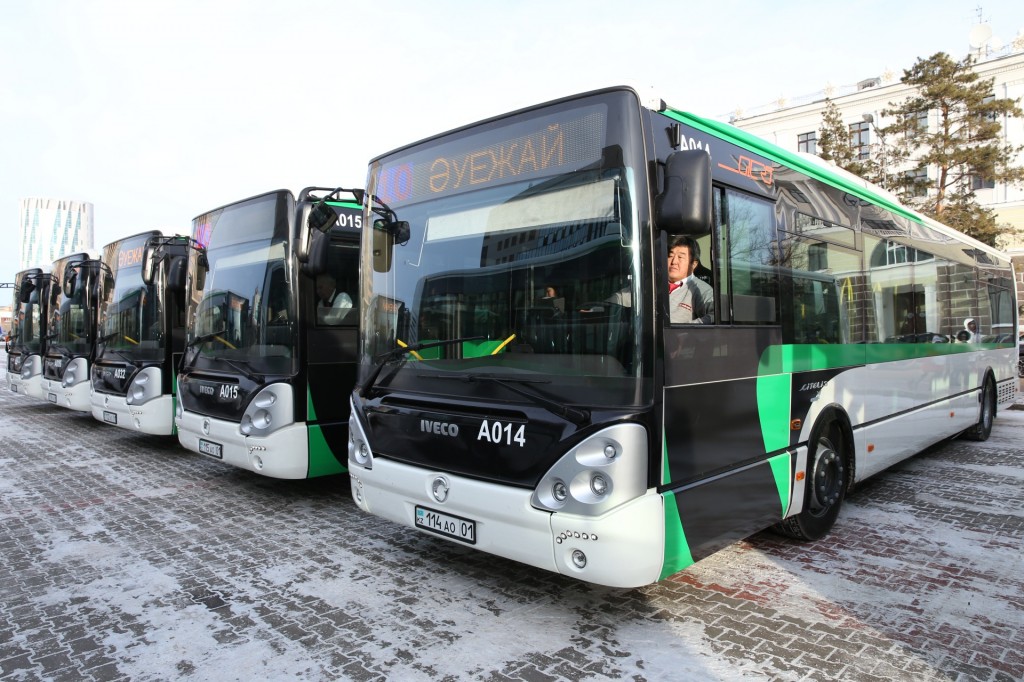 Public transport is used by more than 600,000 people every day and the number is gradually expanding, according to the Akimat (city administration) website.

During the summer, special bus lanes were launched throughout the capital. Beginning at the end of August, residents are now able to use new express busses with routes to the five most popular destinations.

The entire passenger traffic system will be modernised, noted Astana LRT (Light Rail Transportation) Chairman Talgat Ardan. The system has conducted large-scale research with the participation of international experts and adopted a strategy where express routes will be the main frame of the transport system until the development of the LRT network, which has a planned launch by 2017.

“We will go through a big transformation in urban transport. After analysing the work ahead, we know that it is enforceable. In addition, the President and the government support the ideas that are implemented in the Akimat (city administration) as much as possible,” he added.

The city is enlarging in conjunction with an approved plan and with it the number of new districts is also increasing. As a result, bus routes must be changed, according to Ardan.

“Since the formation of the capital, until 2006 the main directions of the routes were mainly from the southeast to the northwest of the city. The main hubs were the railway station and the old market. Now everything is changing; there is a new administrative centre and new areas of attraction,” he said.

International companies and consultants were hired to optimise the network. European companies Systra and Typsa have a great deal of experience in the transport sector and have been conducting research for more than a year. Based on the results of the work, the city administration adopted alterations and the route network started to change. Fifteen new routes will be launched during the second stage of modernisation, with the number expanded to 75 when the third phase is implemented.

New express busses promise to provide the fastest routes with fewer stopping points, higher speeds and higher prices. The works will be the standard used throughout the world and with good management can be highly effective, said Ardan.

Astana LRT signed an agreement May 5 with the Chinese consortium China Railway International Group and Beijing State-Owned Assets Management Co. The city plans to launch the first LRT lane by 2017 and eventually the system will be 22.4 kilometres long and have 18 stations. Trains will travel at a maximum speed of 40 kilometres an hour and the transportation capacity will reach more than 80,000 people per day.

Before the LRT is put into operation, the city needs express busses, said Ardan.

“First, it is advantageous for citizens, especially for those who have to travel to the centre from the distant parts of Astana. I also want to note that today the regular public transport is very popular. We have an incredible mobility of residents. This is confirmed by the fact that 35 percent of residents choose public transport. This is a good indicator. But in the long term we plan to achieve 45-50 percent; the best examples of international practice show that percentage,” he said.

The modernisation programme also includes installation of wireless Internet not only in the busses, but also at the bus stops. By the end of the year, 55 new closed heated bus stops will be launched in the capital, reported the Akimat website. All the bus stops will be equipped with video surveillance cameras connected to the city’s common system and other sensors and air exchange inside the shelters will be conducted by natural ventilation. Special information screens to inform riders about busses’ arrival time and relevant routes will also be provided.

Ardan added new night busses will start running this year. The city administration is working on their routes and calculating the tariffs.

The Akimat also released information in August on the introduction of an e-payment system for public transport by the end of the year. Special validators are currently being installed in vehicles, according to the city transport service. Closer to the system launch, public places will be equipped with machines where people will be able to purchase passes.

Automobiles also compose a huge part of the city’s transport system, with approximately 60,000 cars entering and exiting the city every day, reported astana.gov.kz. The majority belong to entering cars and traffic jams are becoming a usual thing in residents’ lives.

The capital has launched so-called “smart” traffic lights in an attempt to deal with the issue and 42 standards are presently working in the city. Plans are underway to install 402 such systems by 2019. The project operates transport and traffic lights, informs the driver by displays and signs and provides video surveillance of crossroads.

“If there is a failure in the system or any nuances, each controller is in automatic mode and it works using historic data. It uses certain parameters that have occurred on the same day in the same hour. Using that data controls traffic lights and helps manage the traffic,” said Dinmukhamed Izbair, senior manager of the Astana LRT traffic control centre.

The results showed an increase in bandwidth and average street traffic speed up 21 percent. By the end of next year, the system will be installed at 114 of the capital’s crossroads.

Even though the number of people and vehicles rise day by day, the city tries to use best world practices to improve its traffic system.