By Malika Orazgaliyeva in International on 19 August 2015

ASTANA – Kazakhstan’s Special Envoy of the President and Deputy Foreign Minister Askar Mussinov visited Association of Southeast Asian Nations (ASEAN) countries Cambodia and Laos Aug. 12-13 in the framework of promoting his country’s bid to secure a seat as a non-permanent member of the United Nations Security Council (UNSC) for 2017-2018. 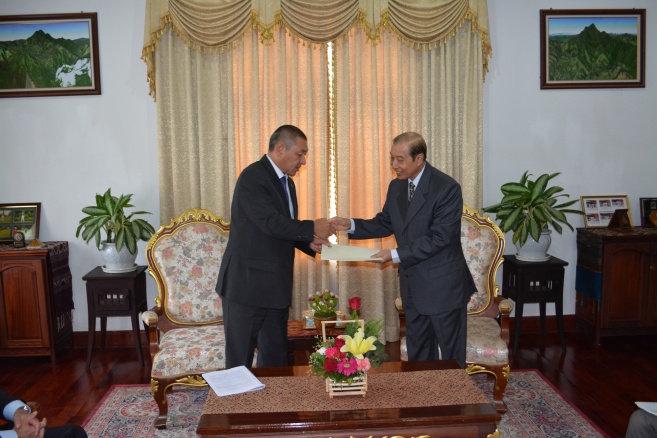 Mussinov met with the Cambodian Foreign Ministry’s Secretary of State and International Cooperation Ouch Borith and Laotian Minister to the President’s Office Phongsavath Boupha. He presented letters from President Nursultan Nazarbayev to his colleagues in the names of Cambodian Prime Minister Hun Sen and Laotian President Choummaly Sayasone regarding support for the nation’s candidacy.

The special envoy updated Borith and Bouphaon Kazakhstan’s contribution in strengthening regional and international stability and security, including in the sphere of nuclear disarmament and non-proliferation, as well as the country’s active participation in multilateral diplomacy.

His counterparts noted Mussinov’s visit demonstrated Kazakhstan is serious about its intentions, as well as assured him the letters would be promptly referred to the leadership of their countries.
The sides reviewed cooperation within the Conference on Interaction and Confidence Building Measures in Asia (CICA) and discussed the initiative of Kazakhstan to establish a new international organisation based on the CICA.

The parties agreed to consider the possibility of organising high-level visits, establishing a consultation mechanism between the foreign ministries and signing basic bilateral documents to develop mutually-beneficial trade and economic cooperation.

Boupha noted he appreciated Nazarbayev’s initiatives and accomplishments in the national and international arena, as well as expressed assurance that Laos would take into account all the facts in favour of Kazakhstan’s bid.

The participation of both countries in the international specialised exhibition EXPO 2017 in Astana was also discussed during the meetings.