Twenty years in terms of constitutional history is a very short period of time. The American and French constitutions, which are the models for so many which followed, are now well over two centuries old. Britain’s famously unwritten constitution can trace its roots back much further to the Magna Carta whose 800th anniversary has been celebrated this year. 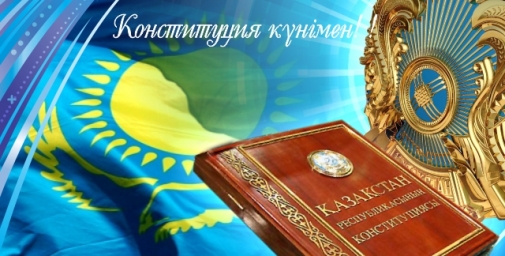 By comparison, Kazakhstan’s constitution, like our country itself, is still very much in its infancy. Drawn up with the help of international experts to replace the constitution in place during our first four years of independence, it was adopted overwhelmingly in a national referendum in 1995.

It was a period of great uncertainty for our young country as we struggled to escape the legacy of the last chaotic years of the Soviet Union. The new constitution underlined our determination to overcome the problems we faced. For the last 20 years, it has guided us through many challenges on our journey to the successful and stable country we have become.

First and foremost, of course, a constitution sets out the structure of government, the responsibilities of its institutions and the relationship between them and, importantly, its citizens. Our constitution created the two chambers of our parliament, elected by our people, as well the clear separation of powers between the executive, legislative and judiciary.

But an effective constitution must go much further than simply institutional mechanics. By establishing the rule of law and the clear rights of the individual, our constitution put limits on the power of government and made clear that its role is to serve the interests of its citizens. In turn, it also laid down the responsibility of each individual to their nation and society.

Importantly, it also embodied the values we hold dear and our ambitions. In a sense, it has helped and continues to provide a road map for the future and a focal point for a sense of national purpose towards a common goal.

These are all roles that Kazakhstan’s constitution has played for our country over the last twenty years. It has provided the springboard for our economic, social and political development. The strong emphasis on individual rights and equality before the law, for example, has created a stable and tolerant society in which all our citizens, whatever their background, feel valued and can make their contributions.

We have also seen how the constitution, while staying true to its guiding values, has evolved as our society has developed. The mistake of imposing too rigid a straightjacket – which can be a barrier to wider progress – has been avoided.  It has instead provided the flexibility that is needed in an uncertain world.

Recent reforms have seen the continued decentralisation and devolution of power, which better suits the more mature, confident and democratic society. Parliament, for example, has taken on increased responsibilities from the executive branch.

These changes will continue under the reforms set out in the 100 Concrete Steps programme designed to accelerate the modernisation of the economy and improve the quality of services to the public at a time of global challenge. Such is the scale of ambition in the plans for an international financial centre in Astana – a powerful symbol of Kazakhstan’s determination to continue its progress – that it is likely to require amendments to the constitution. With the pace of reforms accelerating, it would be no surprise if these reforms are enacted during the upcoming autumn session of parliament which is set to open on Sept. 1.

Our constitution may, in global terms, be young. But its role in our country’s journey has been essential. It is why the 20th anniversary of our constitution will be rightly celebrated across the country on and before Aug. 30.