By Aiman Turebekova in Nation on 18 August 2015

ASTANA – July was traditionally a period of holidays and vacations, but for the military it was a busy month with many engagements in training exercises. 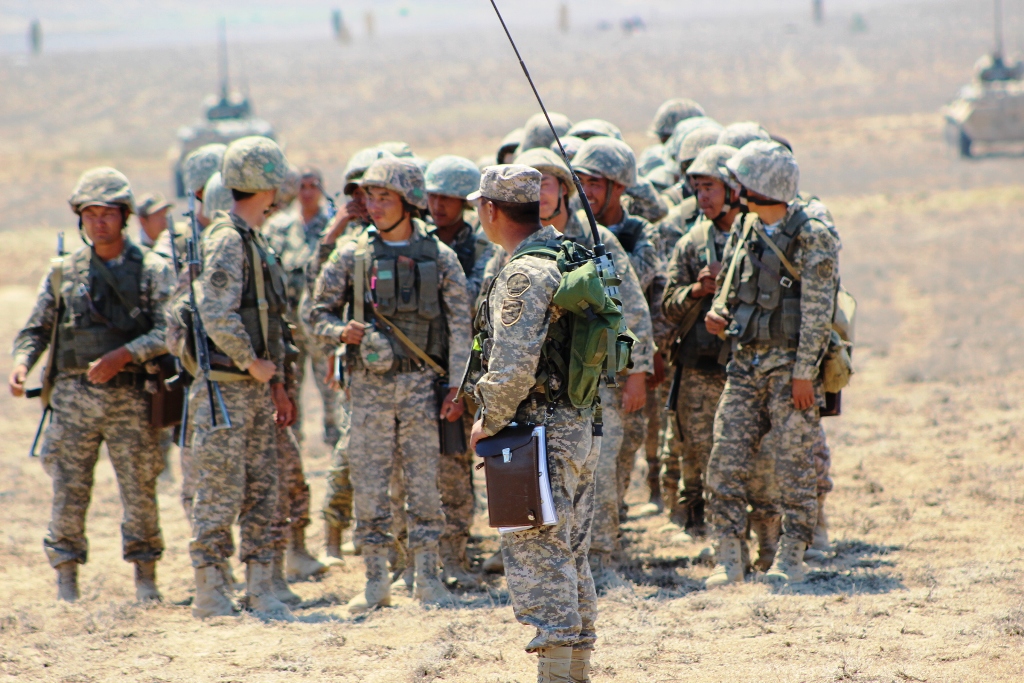 As reported by the Kazakh Ministry of Defence press service, the country’s Armed Forces were raised by a training alarm on July 17. To perform this large-scale event, a national operative staff was established. From the Armed Forces, more than 500 personnel with weapons and military equipment were involved, as well as military transport aviation of the Air Forces of the Northeastern region of Kazakhstan for the transfer of joint forces and resources. This was carried out under the personal supervision of Minister of Defence Imangali Tasmagambetov.

On the same day, Kazakh Navy warships conducted shooting training in the Caspian Sea. The sailors focused on live fire, because they will soon compete with the best seamen of Turkmenistan, Russia and Azerbaijan in the naval biathlone competition that is part of the inaugural Caspian Sea 2015 joint training of the littoral states, thedefence ministry’s press release said. The exercise is taking place this summer in the Russian part of the Caspian Sea. The Kazakh navy is represented by crews of three Kazakhstan-made rocket-artillery ships Kazakhstan, Oral and Saryarka. The sailors also practiced navigating near the coast and navigational hazards, setting the ship anchored at 30-40 metres of depth, transmitting and receiving signals by light and flag semaphore, according to the International Code of Signals MCC-65, as well as rescuing a man overboard.

On July 18 in the southern city of Taraz, the personnel of military unit 22534 took part in the international command post exercise Chemical Safety – 2015, conducted under the auspices of the Organisation for the Prohibition of Chemical Weapons (OPCW).

Sixteen soldiers of the unit were involved in organising a show of modern weapons and means of radiation, chemical and biological defence. During the active phase of the exercise, investigation of a chemical accident was organised, as well as evaluation and prediction of the chemical environment, evacuation of the affected and sanitisation of personnel exposed to chemical contamination. The exercises were observed by accredited representatives from the Technical Secretariat of the OPCW , Armenia, Belarus, Bulgaria, Cuba, Georgia, Lithuania, Poland, Romania, Thailand, Ukraine, and Vietnam. The OPCW is an intergovernmental organisation, located in The Hague, the Netherlands, which promotes and verifies the adherence to the Chemical Weapons Convention, which prohibits the use of chemical weapons and requires their destruction.

The defence ministry also reported on July 20 the completion by military unit 31775 of the Astana Regional Command Astanaof training and tactical exercises Antiterror 2015. One hundred and twenty troops and 10 units of special military equipment were involved in four tactical episodes and one combat mission. Under the scenario, troops gathered intelligence about the conditional commando group and d a detailed action plan to implement its capture and elimination. The exercise was carried out in conditions similar to those present in a big city. This added complexity and reality as fighters would not only eliminate the gang, but be able to ensure the safety of civilians who might become victims of the fighting.