By Michelle Witte in International on 27 August 2015

ASTANA – Kazakhstan and the International Atomic Energy Agency (IAEA) signed three agreements on Aug. 27 in Astana that are expected to advance the international effort to place a low-enriched uranium (LEU) fuel bank in the country. 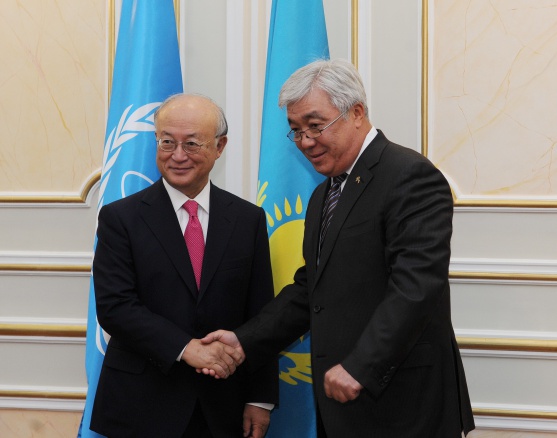 The agreements were signed in a ceremony attended by Minister of Foreign Affairs of Kazakhstan Erlan Idrissov, Minister of Energy of Kazakhstan Vladimir Shkolnik, IAEA Director General Yukiya Amano and CEO of the Nuclear Threat Initiative (NTI) Sam Nunn. The NTI is a major funder of the project, having offered to provide the initial $50 million to kickstart the initiative in 2006, a contribution made by its advisor, billionaire Warren Buffet. The IAEA estimates that the bank will cost $150 million, an amount that includes procuring the LEU and the first decade of operational costs.

The signing of the agreements marks the beginning of the LEU bank’s practical implementation. The bank, which is expected to be operational by the end of 2017, is to be hosted in the Ulba Metallurgical Plant in Ust-Kamenogorsk, which already stores 800 tonnes of uranium materials, according to Shkolnik, and has 60 years of experience in storing and handling such materials. The LEU bank is expected to eventually hold 90 tonnes of uranium hexafluoride, which will be stored as an option of last resort for countries with peaceful nuclear power programmes in the event of a disruption of their commercial fuel supplies.

At the ceremony in Astana, Nunn said that “locating the fuel bank in Kazakhstan is a cornerstone in developing a new and improved approach to managing the risks associated with producing fuel for civil nuclear power.” Later, addressing international media after the signing, he said “I think it’s a real compliment to Kazakhstan; it’s a vote of confidence by the international community in Kazakhstan, in terms of locating the fuel bank here.” Kazakhstan’s unique credibility on nuclear issues comes from its decision to rid itself of nuclear weapons and nuclear material early in its independence, and its ongoing international efforts to end nuclear testing and promote disarmament, he said.

The White House issued a statement on the signing of the host agreement, saying the U.S. president “appreciates President [Nursultan] Nazarbayev’s important leadership on nonproliferation spanning more than two decades.”

“The government of Kazakhstan, by volunteering to host the LEU bank, which was first conceived and funded by the NTI, has further cemented its reputation as a world leader in promoting nonproliferation and nuclear security,” the White House said. 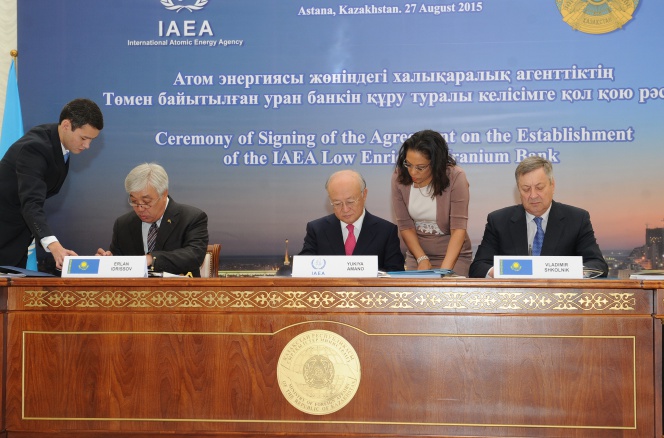 Speaking after the ceremony, Amano said that the international community was “very grateful” to Kazakhstan and that the project would not expose the country to accident or security risks. “You can take pride in your country’s initiative,” he said. “With respect to this LEU bank, your team and our team have worked together very precisely to ensure the highest level of nuclear security. So you can be assured that the IAEA LEU bank will employ the highest standard of nuclear security.”

Rather than impose risks, the project will increase nuclear security and benefit Kazakhstan, Idrissov said. “Kazakhstan is a supporter of global nuclear disarmament and nonproliferation. When we made the decision to host the international LEU bank in Kazakhstan, we are making a practical contribution to global nuclear security and nonproliferation. And doing so, we strengthen our own security by enforcing global security.”

It will also raise Kazakhstan’s profile, both in terms of its political nonproliferation agenda and commercially as a supplier and producer of uranium, he continued. In addition, working closely with the IAEA will give Kazakhstan’s workers in the nuclear sphere access to a spectrum of valuable experience and knowledge, he said.

“We can open new areas of cooperation with the IAEA in terms of the use of atomic energy for different purposes. Today with Dr. Amano, we discussed the opportunities for cooperation in terms of the use of nuclear energy in such spheres as the rational use of water resources … as well as food security,” Idrissov said. “For Kazakhstan, these issues are very relevant. … Moreover, cooperation with the IAEA will help us enforce our physical safety and security of nuclear materials so that there are no accidents. When we speak with the IAEA, our own experts can … increase their knowledge and work experience.”

It was also observed in questions that the bank may provide an option for Iran to get rid of its enriched uranium as work continues on the joint comprehensive plan of action on the Iran nuclear programme. Idrissov said that the signing of the host agreement was “logically linked” to the framework agreed upon by the Iran and the P5 + 1 group in April.

“They are the same issue and I think they complement each other. One testimony to this is that the LEU bank in Kazakhstan, even before the formal signature of this agreement, was recognised as an important tool by the joint comprehensive plan of action. In the first appendix of the plan of action, the LEU bank in KZ is mentioned as one of the potential venues for the potential transfer of LEU material from Iran to this facility,” he said.

Amano said that the procurement of LEU for the bank will be done through the IAEA’s standard open tender process, which is open to all bidders that meet IAEA criteria.