Kazakh History to be Presented as Cloud Computing Game

By Kamila Zhumabayeva in Culture on 25 August 2015

ASTANA – A cloud computing gaming strategy developed in Kazakhstan will present Kazakh history in the form of an interactive game, the 24 KZ television news channel reported on Aug. 13. The Tengrion Сloud Gaming Strategy is scheduled to be released online in 2016. 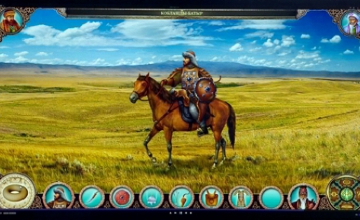 “The youth of today does not go to libraries, but learns about the world via the Internet and especially via game applications. Therefore, they are the most powerful tool of cultural expansion in the western world,” Tengrion creator Adilbek Bisenbayev said. “The task of authors is to create a powerful game application through which the whole world can learn about the national culture of Kazakhstan.”

The project is being supported by the Ministry of Education and the World Bank, which have allocated 72 million tenge (US$286,903) for the development of the largest gaming applications project in Kazakhstan, the report said, referencing the authors of the project.

Tengrion is based on a historical and mythological universe. It uses the latest trends in the gaming industry, such as a “free to play” business model, cloud architecture and more, according to an article on Komsomolskaya Pravda.

The game’s creators even introduced a new category into the gaming industry – “Turkic fantasy,” which means a fantasy virtual world based on Kazakh and Turkic mythology and culture, according to the article, which also emphasised the value of computer game technologies in forming national and state identities, especially among young people and young, developing states.

However, Kazakhstan remains generally skeptical about computer games and the gaming industry, despite its dominant position in the information technology industry over the past decade. Since emerging from the niche market category, the volume of the global gaming market has boomed, exceeding $67 billion, making it higher than the market volume of the film industry, the article stated.

The net annual profit of the industry exceeded $21 billion. The population within the countries of the Commonwealth of Independent States spent over 40.8 billion roubles (US$586.99 million) on game applications last year, according to the article.

Recognising the importance of the industry for Kazakhstan’s society, state and especially industrial and technological development, the first steps in developing the game industry are being made despite previous misunderstandings, the article reported.

Kazakhstan does not have a competitive market of cloud and Internet browser games, despite the fact that they use applied science and high technology and offer clean commercialisation and high financial profitability in the modern cloud and browser industry, according to Tengrion’s description of its technologies.

Tengrion’s creators say that if the computer version of the game is successful, then developing its mobile version is a possibility, according to 24 KZ.