By Aiman Turebekova in Nation on 14 August 2015

ASTANA – In a recent interview with KazTAG news agency, chairman of the aerospace committee (Kazcosmos) of the Kazakh Ministry of Investment and Development Talgat Mussabayev spoke about the effective use of the Baikonur Cosmodrome, issues relating to the development of the space industry and the challenges which Kazakh cosmonaut Aidyn Aimbetov faces as he prepares for his first flight to the International Space Station in September. 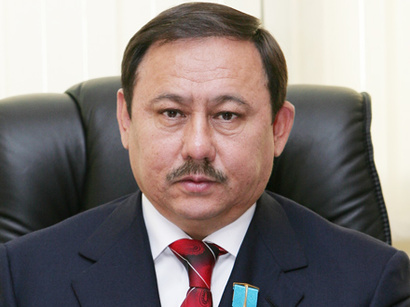 Russians will be paid $20 million for the Kazakh cosmonaut flight. As far as this price is justified and whether it will be made as a barter format, is this partly covered for the rent of Baikonur Cosmodrome?

Indeed, the space flight of the Kazakh astronaut will cost Kazakhstan $20 million, which is a very good deal because the original price for the flights was $50 million.

It should be noted that the amount is not based on the commercial value, but on the price of services provided under the Federal Space Programme of the Russian Federation. Currently, the Russian Space Agency and Kazcosmos are working on a draft contract for the implementation of the short flight of the Kazakh cosmonaut with compensation money from the Kazakh side to the Russian side.

The amount will be paid in 2016. The question of the financial mechanism of Aimbetov’s upcoming flight is currently being negotiated at the government level.

What kind of goals does Aimbetov have today and what will be the results of this flight?

There are several direct functions among his tasks, which will include among others controlling individual systems of the spacecraft, as well as implementation of the fifth scientific programme of space research and experiments on board the ISS, which have been developed by Kazcosmos, the National Centre for Space Research and Technology.

This programme will be implemented in accordance with the previous four research programmes of space research and experiments that were carried out on board the Mir orbital station and the ISS by cosmonaut Tokhtar Aubakirov (in 1991) and by myself  (in 1994, 1998 and 2001, respectively).

The aim of the space research programme is to conduct scientific and technological experiments on board the ISS to obtain new fundamental data and apply the results to be used to solve social and economic problems, as well as to introduce high-tech space technology in the sectors of the economy of Kazakhstan.

Could you please elaborate on what the programme specifically includes?

It includes several areas of work, particularly monitoring natural and geophysical resources during the process and shooting ecologically-critical areas of Kazakhstan (the Aral Sea, monitoring of dust storms in the Aral Sea areas, oil spills in the Caspian Sea), as well as conducting research on the condition and processes in the upper atmosphere over the region with the thunderstorm activity.

As a result, the economic and environmental damage because of environmental pollution and climate change of ecologically-critical areas of Kazakhstan, as well as probability of emergencies, will be assessed.

Regarding the physical and technical research, researchers from Al-Farabi Kazakh National University will conduct basic research in the study of the physical properties of charged microparticles in microgravity.

Thus, it will be possible to get a new structure of the so-called Coulomb crystals which are impossible to acquire under terrestrial conditions. The data obtained can be used in fusion energy and plasma medicine, as well as the production of new structural nanocomposite materials and nanoscale instrumentation.

Speaking about space biomedicine and space biotechnologies, under the direction of our scientists from the Institute of Human and Animal Physiology an astronaut’s performance in real space flight, his psychophysiological state in stressful conditions and their effect on the functional activity was studied.

We heard that the national cuisine will be used during the flight.

Scientists of the Kazakh Academy of Nutrition will produce specialty products of the national Kazakh cuisine based on mare’s milk and horse fat with high nutritional and biological value and directed medical and biological properties, which will be offered to be tested by members of the international space crew.

The results of this experiment will allow us to estimate the body’s resistance to the extreme conditions of space flight and to develop recommendations for improving the level of astronaut training. The results of studies of physiological data will be used in the areas of health, sports medicine and anti-doping analysis.

In addition, an amateur radio channel will broadcast an open programme “About Gagarin from Space,” dedicated to the life and activities of the first cosmonaut of the Earth. A series of records to popularise the achievements of Soviet manned space flights will be also broadcast.

Where will these results be implemented?

They will be used in the space industry, in fields such as ecology and environmental protection, medicine, biotechnology and telecommunications. In addition, they will also be in demand and useful for the space industry organisations in the country and for the government, as well as for higher education institutions in the preparation of the space technology specialists.

What is the total amount for the French contractors who implement the country’s aerospace projects?

The amount paid to French contractors for the creation of the centre for adjusting and testing system of spacecraft project over the last five years has been 16,993,251 thousand tenge (US$90.4 million). This amount was spent on activities such as schematic design of equipment test sites and buildings of the centre, detailed design and manufacture of equipment, the services to support construction, controlling the interface requirements between the building and equipment, elaboration of documentation, preliminary and detailed design of laboratories and production areas of special engineering and design bureau of space technology and pilot production.

Do you anticipate that the aerospace committee will cooperate with the United Arab Emirates (UAE) space programme in the near future?

On March 9, 2015 in Abu Dhabi, I had a meeting with the chairman of the United Arab Emirates Space Agency Dr. Khalifa Al Rumaithi.

The Kazakh side proposed considering the possibility of cooperation in the fields of space including:

the use of the ground infrastructure of the Kazcosmos National Centre of Space Communication to monitor the orbital-frequency resource in the interests of bilateral cooperation;

considering the opportunity to create communication spacecraft in the interests of Kazakhstan and the United Arab Emirates;

Estimating the amount of budgetary funds necessary for the implementation of the above-mentioned areas of cooperation will only be possible after the determination of areas and the concept of mutually-beneficial cooperation between Kazakhstan and the United Arab Emirates.

When is Russia planning to leave the Baikonur complex and completely switch to launching its rockets from the Vostochnyi Cosmodrome?

The agreement also covers the modernisation of the infrastructure of the Baikonur Cosmodrome and the creation of a new environmentally-safer space rocket system for the subsequent phase-down of exploitation of vehicles that use highly-toxic components of rocket fuel.

In accordance with the agreements in the framework of the second session of the Kazakh-Russian intergovernmental commission on Baikonur, the sides agreed to complete operations of Proton-M rockets from the Baikonur Cosmodrome. The final launches are planned for 2025.

Currently, Kazakhstan and Russia continue to cooperate closely at the Baikonur Cosmodrome on the creation of Baiterek, a greener joint space rocket system which should replace the Proton.

However, Russia is indeed building a new cosmodrome in the Far East and, sooner or later, will gradually transfer part of its launches to its own spaceports – Plesetsk and Vostochnyi. At the same time, the Russian government clearly states that it is not leaving the Baikonur Cosmodrome. Only time can give an exact answer to this question.

Will Kazcosmos contact Gazprom Salavat Petrochem, the manufacturer of heptyl, with the request to improve the environmental performance of this fuel?

The requirements for the Gazprom Salavat Petrochem OJSC apply to waste products of heptyl and do not belong to most rocket fuel.

The synthetic chemical compound asymmetrical dimethyl hydrazine (better known as heptyl) is the substance of the first class of danger and will fit this description, despite the improvement. Currently, Kazcosmos has no plans to contact the manufacturer of heptyl because improvement of environmental performance of the fuel is not possible.

Kazakhstan receives $115 million in annual rent for the use of the Baikonur complex by the Russian Federation. It should be noted that, in accordance with the agreement, Russia does not pay any other charges, taxes and fees except the annual rental payment.

Kazcosmos has no information on the number of planned launches of Soyuz carrier rockets from the Baikonur Cosmodrome in the framework of the Oneworld and Arianespace project, because Kazakhstan is simply not a party to it. The question about the future of the Internet resource distribution in our country in the framework of this project does not fall within the competence of Kazcosmos.

Could you say that the Kazcosmos budget and that of its branches will be but one of the revisions of the articles of government spending?

At the next meeting of the National Budget Commission, sequestering of Kazcosmos budget amount to about 724 million tenge (US$3.9 million) will be considered.