ISIS Violence not a Serious Threat to Central Asia, Region not in Midst of New Great Game, Says Expert

By Michelle Witte in International on 17 August 2015

ASTANA – Violence being conducted under the names of ISIS or the Islamic State now being referred to as Daesh, is a concern, but not a serious threat to Central Asia, and current tensions between the three major powers are merely blips in long-term “family” relationships, Richard E. Hoagland, former U.S. ambassador to Kazakhstan (2008–2011) and Tajikistan (2003–2006), told Voice of America in an Aug. 13 interview following his latest trip to Central Asia and the South Caucasus. 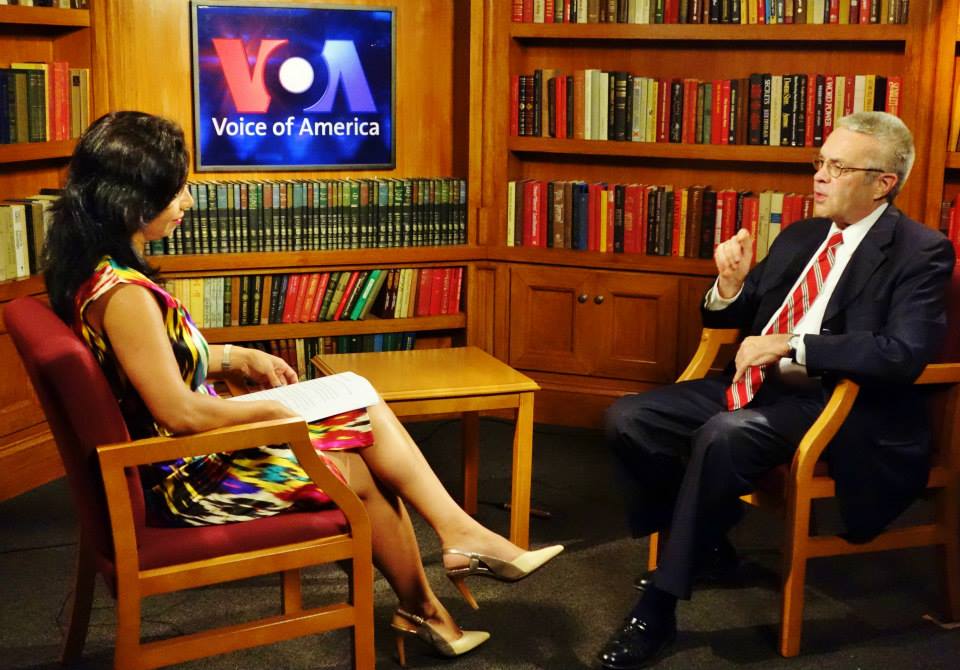 “[Daesh] is not yet a major serious threat to the security and governments and peoples of Central Asia,” Hoagland said in the interview, during which he also discussed cooperation and competition between China, Russia and the U.S. in Central Asia and looked back on his decades of diplomatic service. Hoagland has also held high-ranking positions at American embassies in Pakistan and Turkmenistan and until his retirement this week served as principal deputy assistant secretary in the U.S. State Department’s Bureau of South and Central Asian Affairs.

Central Asians travelling to Syria to fight for Daesh is a cause for concern, Hoagland said. “We need to watch closely. We need to consult with our government-to-government partners. We need to pay attention to international security, but I want to emphasise, it’s not like the barbarians are at the doorstep ready to sweep into all of Central Asia.”

Nor is the region in the midst of another Great Game, the career diplomat said, with the U.S. capitulating to Russian and Chinese demands that it leave the region to them. The U.S. is in Central Asia “for the long term,” he said, and America’s new embassies, recently built or under construction across the region attest to that.

“We are not about to leave anytime soon,” he said. “At the same time, we emphasise to our partners in each country we fully support your independence, your sovereignty, your territorial integrity, but we don’t demand that you make a choice of your partners. That’s your responsibility.”

In China, which is beginning to engage deeply in the region, particularly with its New Silk Road Economic Initiative, the U.S. sees a partner, Hoagland said. “[W]e have had consultations with China to see if we can understand each other’s New Silk Road initiatives a little bit better. It’s not a competition. I know that other countries see it as a competition. We don’t. We see it as a partnership.”

Russia will remain a natural partner for Central Asia due to their shared history and geography, Hoagland said. As for the tensions between the U.S. and its former Cold War adversary, he advocated taking a long view.

“In the near term, I think we need to be strategically patient, which means it’ll take a little bit more time, but let’s look back over 20 years. … Relationships rise, and then they fall, and they rise, and they fall. Diplomatic relationships are very much like personal family relationships. There can be big problems, but you have to want to surmount those problems. You have to want to get back to a positive, even, respectful keel with each other.”

It cannot be denied that things are difficult at the moment, Hoagland said, “but we have had a long relationship, and I firmly believe that as time goes by, we will find ways to make that a mutually respectful and mutually positive relationship again.” He later called the agreements established, with the support of Russia, between the U.S. and Tajikistan, Kyrgyzstan and Uzbekistan following the 9/11 attacks “a great moment in diplomatic history.”

Hoagland, at the end of his government career, provided some advice for new diplomats in the region. “If they were to ask for my advice, and a few already have, I would say be patient, don’t jump to conclusions, get to know the country, don’t stay inside your bubble, get outside of the golden cage, travel around the country, meet people and be a little bit humble.”