NEW DELHI – Expo 2017 is a national project which is expected to provide long-term social and economic effect, giving a powerful impulse for further diversification and modernisation of the national economy for Kazakhstan’s transition to a green economy. 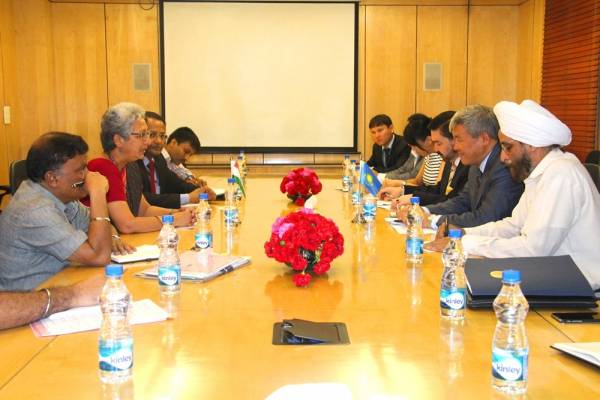 Hosting a successful project is a responsible mission that affects a very wide range of organisational issues. Working on these matters, a Kazakh delegation led by Rapil Zhoshybayev, commissioner of EXPO 2017 and the country’s First Deputy Foreign Minister, visited India Aug. 17-19.

India is interested in participating in the Astana expo and establishing cooperation with Kazakhstan in the field of new and renewable energy sources, including solar energy, said Indian Prime Minister Norendra Modi during his visit to Kazakhstan in July.

Zhoshybayev met with the leadership of the Indian Ministries of External Affairs, Commerce and Industry, Tourism, the India Trade Promotion Organisation (ITPO) and Association of Tour Operators, as well as senior representatives of the Confederation of Indian Industry and leading companies in the field of renewable energy based in Bangalore, a city known as the heart of the Indian Silicon Valley.

Meeting with Sujata Mehta, secretary of the Indian Ministry of External Affairs, the sides discussed the current state and prospects of cooperation between the two countries, the outcome of the Prime Minister’s visit and New Delhi’s participation in EXPO 2017, as well as prospects for enhancing mutually-beneficial relations in other areas.

Mehta noted India had confirmed participation in EXPO 2017, despite the fact her country is still not a member of the Bureau of International Exhibitions (BIE). She declared India needs an impressive area at the exhibition – about 2,000-3,000 square metres – to show everything it has managed to achieve in the field of alternative energy sources. She provided assurance the country would be well represented at the exhibition.

In turn, Zhoshybayev noted India’s participation would give a new impetus to strengthening the strategic partnership between Kazakhstan and India and open new horizons for cooperation, particularly in green energy.
The Kazakh diplomat and secretary of the Indian Ministry of Tourism Narendra Kumar Sinha discussed developing further cooperation in tourism, facilitating the visa regime, organising the Indian Culture Days in Kazakhstan in 2017 and the possibility of opening a direct flight between the two capitals. The sides also discussed implementing joint projects and promoting Kazakh tourism in India.

“We want to [host] the Days of India festival in Astana. We have met with the Indian side [and reviewed ways] to boost tourist inflows to Kazakhstan. We want to have a better understanding of Indian culture, especially Bollywood,” said Zhoshybayev.

In addition, the Indian Association of Tour Operators (IATO) and Astana EXPO 2017 signed a memorandum for tourism cooperation. IATO President Subkhash Goyal noted the organisation is planning to study Kazakh sights and develop tourist packages. He noted the need to open as many new flights as possible and connecting them to Indian airlines: JetAirways, AirIndia and JetLite. He also stressed the importance of simplifying the visa regime and one of the best ways to do so is introducing electronic visas. Approximately 14,000 Indians visit Kazakhstan annually.

During the meeting at the Indian Ministry of Commerce and Industry, the sides discussed bilateral trade-economic relations, prospects of cooperation in green energy and interaction between the two countries’ respective state agencies and companies regarding participation in EXPO 2017.

As part of his Indian visit, Zhoshybayev made a special presentation on EXPO 2017 for the leadership of the trade and industry promotion organisation, which is responsible for Indian participation in the upcoming exhibition, as well as members of the Federation of Indian Chambers of Commerce and Industry and the Confederation of Indian Industry. During the demonstration, they discussed the terms of participation, location of the pavilion and other technical issues.

Based on the results of the negotiations, the Indian side expressed a willingness to sign an agreement on the country’s participation during the September visit of the commissioner of the Indian National Section to Kazakhstan.

Indian scientists create most of their advanced technologies based on alternative power engineering in Bangalore, in the southern area of the country. The Kazakh delegation visited the city Aug. 19, which is the largest industrial centre in India and location of the main IT companies and prestigious universities.

Presentations for EXPO 2017 were made during the visits to the technology parks and research institutes. The staff of India’s leading scientific institute became interested in the exhibition’s opportunities and the scientists showed their willingness to display their best technology in renewable and alternative energy sources in Astana.

Siwa Umapati, a professor at the Indian Institute of Science, noted it was an excellent idea to highlight such an important subject as energy of the future at an expo. The institute is directly involved in implementing and developing solar power, which is already included in the Indian programme.

In the framework of the Kazakh delegation’s visit, numerous important agreements were achieved that contribute to the further development of relations with India and its participation in the exhibition. India became the 36th country to officially confirm its participation in EXPO 2017.