By Aiman Turebekova in International on 26 August 2015

ASTANA – A ceremony to honour the five regional winners of the second “Kazakhstan Through the Eyes of Foreign Media” contest took place in the Ministry of Foreign Affairs of Kazakhstan on Aug. 25. 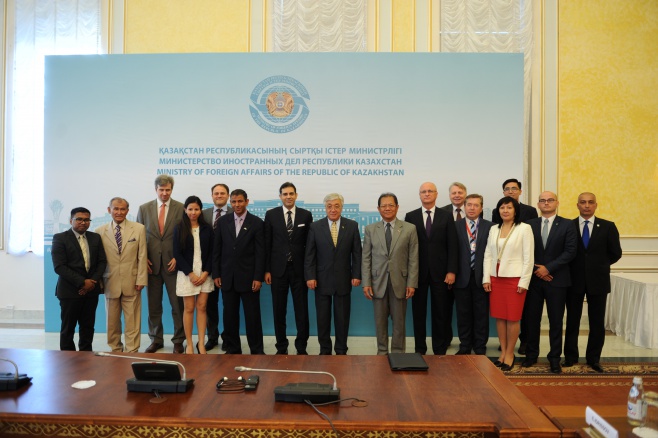 Foreign Minister Erlan Idrissov (C) poses with winners and sponsors of the “Kazakhstan Through the Eyes of Foreign Media” contest on Aug. 25.

Five regional prizes were chosen from among this year’s 55 entries, with winners being selected from the Commonwealth of Independent States (CIS), Europe, the Americas, Asia and Oceania, and the Middle East and Africa.

According to the Foreign Minister, the geographical expansion of the contest “reflects the international community’s growing interest in Kazakhstan.”

“I am delighted that the Foreign Ministry’s initiative is wholeheartedly backed by the Union of Journalists of Kazakhstan, and this, in my opinion, is a good example of constructive cooperation between public authorities and civil society,” Idrissov said at the ceremony.

In his opening speech at the ceremony, Idrissov emphasised the kindness and hospitality of the people of Kazakhstan, calling the country’s population “very pragmatic in the Western way and at the same time, very kind, generous and hospitable in the Oriental way.”

He also pointed out the dramatic development of Kazakhstan and Astana, and said that “Journalists play a very important role in promoting peace and prosperity in the world.”

“The progress of technology in mass communication has allowed media to reach every corner of the world more quickly, with vivid graphics. Therefore, global media plays a very important role in international relations. Media targeting a foreign audience are a vital part of a country’s public diplomacy infrastructure, since they contribute to showcasing the country’s culture and traditions and help to channel its policies with the outside world,” Idrissov said. The five journalists honoured this year were Central Asian Dialogue journalist Alo Khodzhayev from Uzbekistan, who won among CIS journalists for his article “Locomotive of Progress,” which profiled a plant producing electric locomotives in Astana as an example of Kazakhstan’s economic diversification. NaWschodzie.eu journalist Bartosz Mendyk from Poland won among European journalists for his story “Nurly Zhol is the Path to the Future;” reviewing Kazakhstan’s new economic policy unveiled last year. Evelin Armella of Argentina won among journalists from the Americas for her article “A Place to Discover: Kazakhstan.”

The winners were also given gift certificates by the contest’s sponsors and partners, which include national railway company Kazakhstan Temir Zholy, Transaero Airlines, the Hilton Garden Inn Astana and the Rixos Borovoe, and transport company Argymak.

The ambassadors of Egypt and Indonesia also attended the ceremony and congratulated the winners.

The winners expressed their gratitude to the organisers of the contest for the opportunity to visit Kazakhstan.

In his speech at the event, Khodzhayev said, “I express my joy and pride in the recognition of our success in the contest. I would like to emphasise the importance of this competition. The purpose of journalists is to write about everything, sometimes not very pleasant [things]. But when I write about Kazakhstan, I do it with great interest, and from the soul. Kazakhstan is a shining star in Central Asia due to its huge success and achievements, not only in political terms but also economic, social and, most importantly, spiritually. Kazakhstan’s experience is worth studying. Of course, at the same time, I would like to highlight the role of your outstanding leader, President Nursultan Nazarbayev. To the best of my ability, I will try to continue to fully support the strengthening of relations between Kazakhstan and Uzbekistan.”

Indonesian journalist Zubaidi said, “We do not simply know about Kazakhstan from literature. We are witnessing the development of Kazakhstan. I will be very glad to come again and again to Kazakhstan.”

Armella, who travelled the greatest distance to reach Kazakhstan, said “Few people know about Kazakhstan in my country. However, I can vouch that I will cover it through my articles, thereby informing people about your country.”

“Despite the short time of your visit, I hope you will see with your own eyes not only the rapid transformation of our capital, but also the growing dynamics of the country’s economy and the development of civil society. In Kazakhstan, unity, harmony and openness are our fundamental values,” said Idrissov.

The five winners were rewarded with a trip to Kazakhstan, including visits to Astana, Almaty, the Burabai resort area, sightseeing activities and a cultural programme, along with interview opportunities with Kazakhstan’s senior government officials, leading managers and journalists.