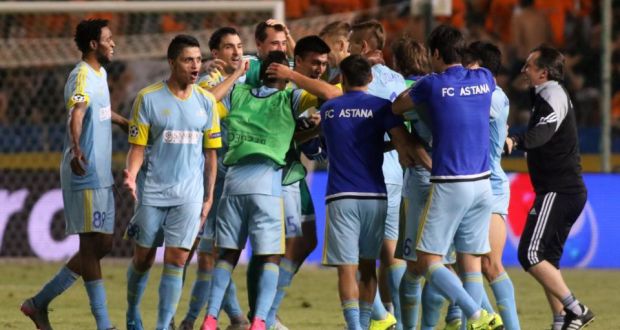 Thanks to a header by Baurzhan Dzholchiyev in the 14th minute a week before in front of a 30,000 home crowd in Astana, the Kazakh team ousted APOEL with a tie in Cyprus after scoring in the 84th minute.

APOEL midfielder Semir Štilić scored in the 60th minute to give his club hope for a come back on aggregate, however, with a late goal by Astana’s Nemanja Maksimović, who was left in front of the open net and only tapped the ball in after a nearly perfect pass from Dzholchiyev, all hope disappeared. APOEL had to score two more goals to beat out Astana’s away goal, as per UEFA regulations.

“This is a very big win for Astana and for all football fans in Kazakhstan,” UEFA.com cited Stanimir Stoilov, Astana coach. “We are all celebrating and there is a feeling of great joy. I have to be first to congratulate my players on this great achievement as well as our fans, my coaching staff and everyone associated with the club. This achievement caps a great effort by my players. We will try our best in the group stage and I think we can get some points. But it will be difficult. We will enjoy the experience and we are certainly looking forward to it.”

“We had a lot of chances but when you cannot score and you concede, a result like this happens,” Domingos Paciência, APOEL coach said. “We played against a defensive team and we didn’t take our opportunities. I cannot fault my players, they did their best. Disappointments like this occur when you don’t take your chances. I knew how important reaching the Champions League was to this club. We had a bad 20 minutes and that was enough to see us exit the Champions League. Astana plays a simple game but they managed to score against us at home and away.”

In a draw held Aug. 27, FC Astana was placed in Group C along with Benfica from Portugal, Atlético from Spain and Galatasaray from Turkey. Their first game in the group stage will be against Benfica in Lisbon on Sept. 15.