By Kamila Zhumabayeva in Culture on 25 August 2015 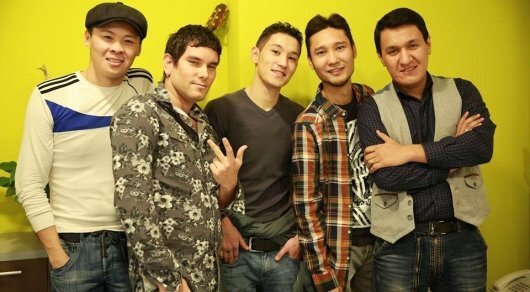 “Latin music is very vivid, catchy and hard to lose with. When a Latin singer added other ethnic motifs while singing in his own style, it resulted in a winning mix of Kazakh folk and sufficiently-dynamic modern Latin music,” said Aldaspan member Nurzhan Toishi. “The Spanish language is very beautiful and has more love, romance and passion in it than, for example, the English language.”

Despite the language barrier and complexity of its lyrics, Real noted he chose “Kara Zhorga” because it felt very close to the spirit of Cuban music, said the article.

“At first, when selecting a song I was guided by only one criteria – to be able to easily pronounce words in the Kazakh language, but once I heard ‘Kara Zhorga,’ I realised that I should start exactly with this song,” the singer shared in an interview with Tengrinews.

“As the saying goes, ‘there are no easy paths,’ and I decided to simply learn the most difficult words so that an accent could not be heard,” said Real, emphasising his desire was to perform “Kara Zhorga.” “It is a dance song, very much like Latin music. I took the risk and I think I succeeded.”

Real lived in Almaty for five years and became popular in Kazakhstan for his participation in the country’s version of “The Voice” television singing competition. Since then, he has been promoting Kazakh music abroad, particularly in Hispanic countries, said Tengrinews. “Ay Maria,” recorded by Aldaspan and Real, hit the Radio Metropolitana charts in Cuba in June, according to the news website.

Turkic ethnic music is in demand in European and American countries, Real noted.

“It is very vivid, rhythmic and has typical motives which, I think, are familiar for the world music market. For my part, I will do everything within my power to talk about this music beyond Kazakhstan,” he said.