Conference on Kazakhstan’s Constitution Held at Palace of Independence

By Aiman Turebekova in Nation on 28 August 2015

ASTANA – The international conference “Constitution: unity, stability and prosperity,” dedicated to the 20th anniversary of the Constitution of Kazakhstan was held at the Palace of Independence in Astana on Aug. 28, the Akorda press service reported.

President Nursultan Nazarbayev (C) speaks at a conference on the anniversary of Kazakhstan’s constitution on Aug. 28.

President of Kazakhstan Nursultan Nazarbayev attended the event and noted in his welcoming address that the Aug. 30, 1995, referendum on the constitution was conducted correctly.

“If our approach to state-building had inclined toward hasty, politically abstract schemes, we definitely would have suffered a failure. Of course, the price of failure would be catastrophic. The experience of many newly independent countries … is very sad. We know that the construction of the state is an extremely delicate, complicated, time-consuming and sometimes painful process. Creating a new country cannot be done based on a strict timetable and utopian plans. Sustainable stability goes together with economic progress and welfare. As a result, without stability within the country, the chance of bringing some potentially successful changes to the country would be zero,” the President said.

The conference was also attended by Prime Minister of Kazakhstan Karim Massimov; the chairman and members of Kazakhstan’s Parliament; the chairman and members of the Constitutional Council of Kazakhstan; delegations of international organisations including the UN, the Venice Commission of the Council of Europe, the Organisation for Security and Cooperation in Europe, the European Union, the Court of the Eurasian Economic Union, the German Society for International Cooperation and the German Foundation for International Legal Cooperation; the heads of constitutional agencies; representatives from the courts, prosecutors and human rights institutions from 28 countries; and foreign and domestic lawyers, political scientists and experts.

Participants analysed and evaluated the legal achievements of Kazakhstan and shared their experience of constitutional development and legal reforms.

“Kazakhstan today is a respected and dignified country and offers an example of the concrete implementation of all the provisions and principles of the constitution. We can consider that the state and the social system are effective, even if there is room for further development. Our basic law has all the legal tools for the successful development and self-renewal of the nation. We have set a global target – by mid-century – to make Kazakhstan one of the 30 most developed countries in the world based on the Kazakhstan 2050 Strategy,” Nazarbayev said. 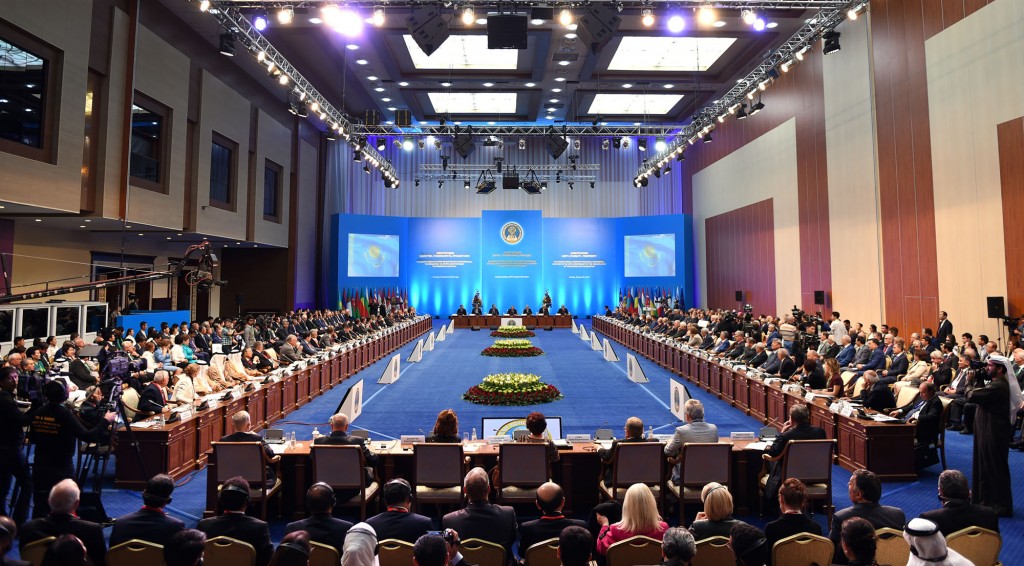 On the first day of the conference, a plenary session took place, as well as a presentation of the book, “Kazakhstan’s trend: from totalitarianism to democracy and the rule of law (A view from outside)” which contains articles and reviews of foreign government bodies and public figures on the achievements in the sphere of legal development of Kazakhstan over the last 20 years.

“Our constitution clearly states the common values shared by all people of Kazakhstan. There is a tough ban on discrimination on the grounds of race, nationality, beliefs, language and religion. The most important thing is that we have expanded the scope of Kazakh language, history and culture. At present, schools and higher education institutions offer training in the Kazakh language. Magazines and books are published in the Kazakh language. We have revived our language, culture and mentality. But at the same time, we did not infringe upon the rights of other ethnic groups,” said Nazarbayev.

Foreign guests noted Kazakhstan’s achievements in maintaining political stability, ensuring interethnic and interreligious harmony and stability and the consistency of the process of democratisation and liberalisation, the Akorda reported.

On Aug. 29 the conference will continue its work in at Lev Gumilyov Eurasian National University and the Kazakh Humanitarian Law University.