ASTANA – With a 3-2 victory over Admiral Vladivostok in the final match, the city’s Barys won the President’s Cup, the annual open ice hockey tournament organised for the sixth time. The competition began Aug. 9 and the last game was held four days later in the capital’s new Ice Palace, launched right before the championship. 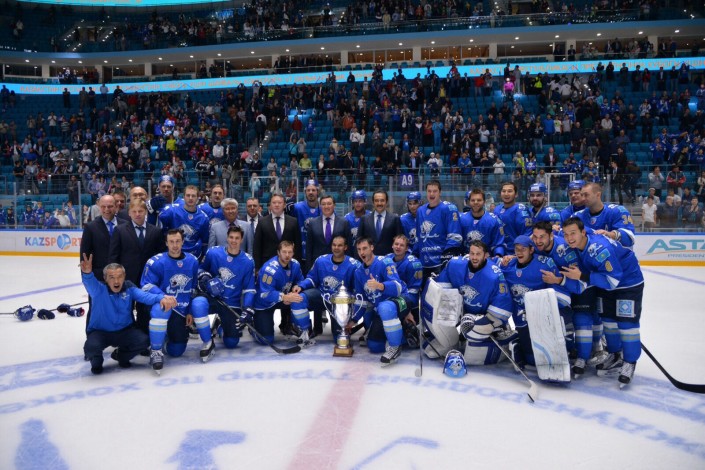 The match opened with performances of the Kazakh and Russian anthems. Barys played an active game from the first minutes and Admiral goaltender Igor Bobkov displayed excellent work withstanding the attacks. During the first period of the final game, both teams’ attempts to score failed and the players went to the locker rooms with a score of 0-0.

After the break, the home team’s Brandon Bochenski scored the first goal on a pass from Kevin Dullman. In less than five minutes, however, the opponents equalised the score on a goal by Maxim Mamin. Five minutes before the end of the period, Barys’ Evgeni Rymarev took a pass from Talgat Zhailauov to bring his team forward, 2-1. But the Astana club could not hold the advantage, as Admiral’s Konstantin Makarov tied the game at 2-2.

Neither rival put the puck in the net during the third period, sending the game into overtime. In the 62nd minute, Roman Starchenko scored the final goal to lead his team to victory.

“It was good game. After looking at the moments, it turned out that both teams tried to play active hockey; they did not try to devote every effort to defence and attacked boldly. That is why there were many good, beautiful combinations played on the counter attacks. The game was equal,” said Barys head coach Yerlan Sagymbayev, reported sports.kz.

Barys and Admiral met previously during the group stage of the tournament. The game ended with a score of 2-1 in favour of the Astana team.

“It was an excellent tournament. It was quite hard due to the ice,but the team did a great job and won the cup. It is a nice start to the season,” said Barys right winger Evgeni Rymarev, according to vesti.kz.
Ugra from Khanty-Mansiysk took third place in the tournament after beating Metallurg Novokuznetsk by a score of 1-0.