ASTANA – Kazakhstan’s largest aviation company, Air Astana, is to be the “Official Air Carrier of EXPO 2017,” following a memorandum of cooperation signed with the Astana EXPO 2017 National Company, which is organising the event, on Aug. 17. Chairman of Astana EXPO 2017 Akhmetzhan Yessimov and President of Air Astana Peter Foster signed the memorandum on behalf of two companies. 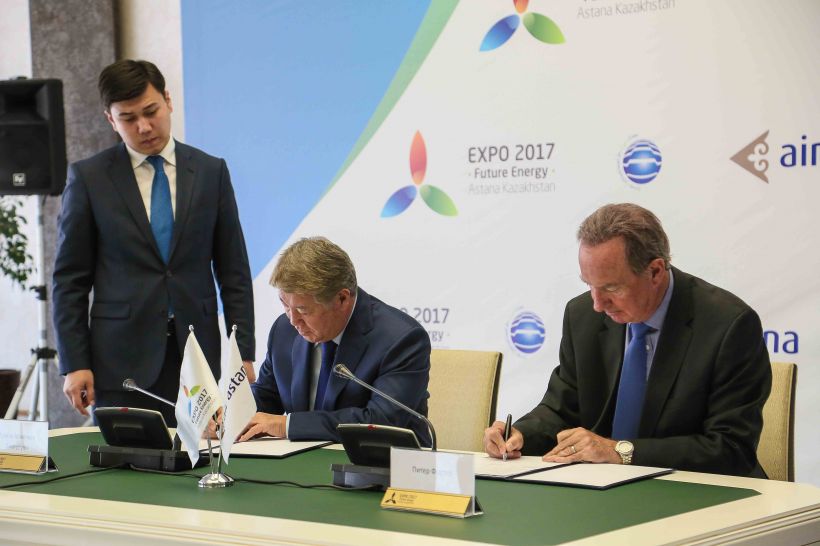 On July 12 this year, Prime Minister of Kazakhstan Karim Massimov introduced Yessimov, a former akim (mayor) of Almaty City, as the new head of Astana EXPO 2017. Yessimov was appointed to the position by President Nursultan Nazarbayev a few days prior.

“Air Astana is the largest airline in Kazakhstan, and the memorandum signed today will be the first step in our cooperation. With its international reach across Asia, Central Asia, Europe and the Middle East, the airline will be able to promote this major project around the world. We have agreed to place the EXPO 2017 logo on all of Air Astana’s aircraft and to develop a joint promotional plan for the exhibition, which will be enormously beneficial to building international awareness,” said Yessimov.

Some 2.1 million people are expected to visit the exposition, and the partnership is expected to give additional impetus to Air Astana’s continued expansion of its network.

“The theme of EXPO 2017 will be Future Energy and the event will focus on innovative and practical energy solutions and their global impact. The airline industry is a contributor to greenhouse gas emissions, and at Air Astana we continue to take corrective action through the introduction of greener technology. At the recent Paris air show, we announced our intention to acquire a fleet of Airbus A320 family NEO aircraft, whose new engine technology should save up to 15 percent of emissions. The NEOs will be introduced from 2016. The EXPO 2017 site is well underway, and we look forward to supporting what will be a fascinating and enjoyable extended event, as Astana opens its arms to the world,” added Foster. Within the framework of the memorandum , there are plans to integrate the airline’s online reservation system onto the event website, www.expo2017astana.com, and also to conduct a joint promotional campaign. In addition, all passengers arriving in or transiting through Astana will be given tickets to the exhibition in 2017.

Air Astana launched regular flights on May 15, 2002 and has a route network that includes more than 60 international and domestic flights operated from the country’s major hubs in Almaty, Astana and Atyrau.