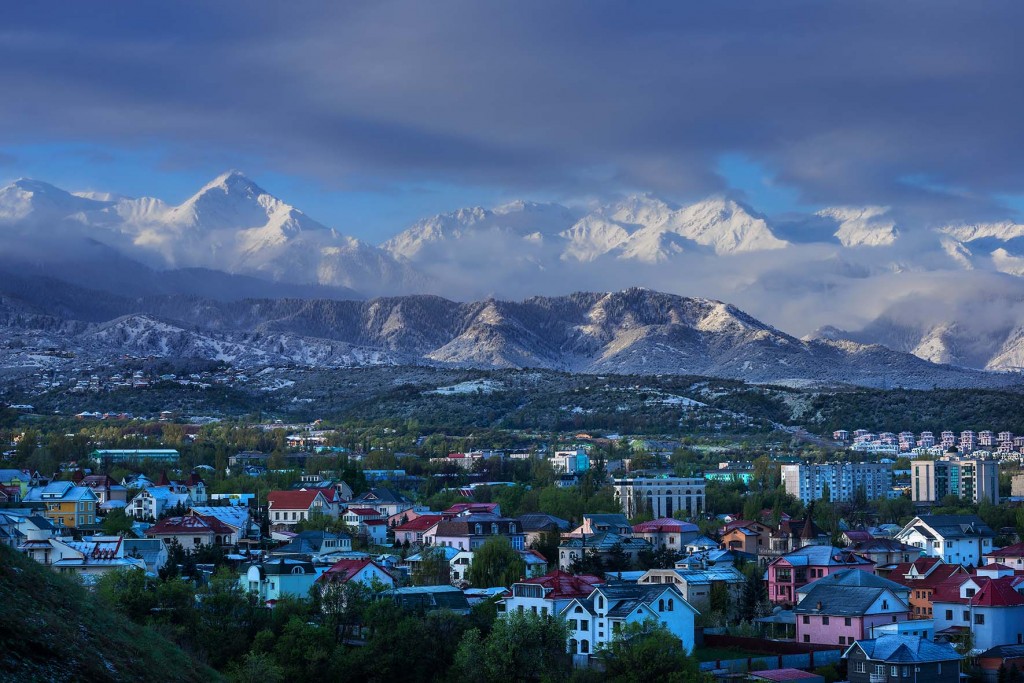 ASTANA – Tens of thousands of residents of Almaty, Astana, Oral and other cities enthusiastically took part in bike rides and other events May 23 to celebrate International Olympic Day and demonstrate support for Kazakhstan’s largest city’s bid to host the 2022 Winter Olympics.

Starting from the Sunkar international ski jump complex, Almaty participants finished their bike ride at the central stadium, where volleyball, table tennis, arm wrestling and other activities were arranged, reported Kazinform news agency. “Today, we opened a bike ride event in the framework of International Olympic Day, which has a special significance for us since our city is bidding to host the [Winter] Olympics in 2022.

Thousands of people passed through the streets of the city, thus confirming the commitment of people from Almaty city to a healthy lifestyle,” said Mayor Akhmetzhan Yessimov, who also handed awards to the most active cyclists in various categories. A message of greeting on behalf of International Olympic Committee (IOC) President Thomas Bach was delivered by Kazakh National Olympic Committee Vice President Pavel Novikov. “Olympic Day is a perfect opportunity to attract young people to a healthy lifestyle. Let’s keep these wonderful traditions. Continue to explore and discover new sports, create, inspire, be active,” read the IOC president’s statement. “Kazakhstan has been pursuing our Olympic dream for many years, in fact this is our second bid for the Winter Games,” said President Nursultan Nazarbayev ahead of the event as quoted in a press release by the Almaty 2022 Bid Committee. He added, “We have invested heavily in winter sport for the past fifteen years to increase our venue capacity and our hosting experience. … Almaty 2022 represents a great step forward for the people of Kazakhstan and the Central Asian region; a region that has never hosted the Olympic Games. Almaty and all of Kazakhstan are looking forward to showing the world our hospitability, diversity and uniqueness.” Andrey Kryukov, Vice Chairman of Almaty 2022 Bid Committee, also commented, “We are on the final stretch of this exciting race. The successful visit of the Evaluation Commission in February was accompanied by incredible winter weather and lots of fresh, pure snow. We worked hard to improve the concept based on the recommendations we received from Chairman Zhukov and his great team and reduced our operational budget by over half a billion dollars to improve our already excellent plan. And this plan is what we will present to the IOC membership and the representatives of the International Federation on June 9.” Kryukov added, “We know we have a great offer for the Olympic Movement – the most efficient and convenient Winter Games concept in over thirty years.

Seventy percent of our venues are ready today and 80 percent will be ready by 2017 for the Universiade. Almaty is a safe choice in terms of venues and infrastructure. We feel like a team in the hockey final of the Olympics now, fully concentrated, motivated and very much looking forward to present our wonderful city and the nature surrounding it to the IOC membership.” In turn, Sipovich, who is also a member of the Almaty 2022 Bid Committee, said, Kazakhstan is a sporting nation committed to the ideals of the Olympic Movement. We applaud the Agenda 2020 initiatives and are committed to follow the IOC’s lead on these matters.”

In a phone interview for this story out of Lausanne, Kryukov said the presentation went very well and said he was quite optimistic about a good impression it made on members of the IOC. News reports following the presentation seem to confirm the sentiment with the Associated Press reporting that the team has impressed IOC members with its focus on specifics such as snowy winters and relative affordability of the games concept.

According to media reports, the Chinese delegation presenting Beijing’s bid later during the day was led by Vice Premier Liu Yandong who attended the event in Lausanne as part of her European tour. Massimov, during his two-day stay in Lausanne on June 9-10, was also reportedly scheduled to meet with IOC President Thomas Bach. The final voting to determine the host of 2022 Winter Olympics will take place at the 128th IOC session in Kuala Lumpur, Malaysia where 99 voting members will cast their ballots in secret to choose between Almaty and Beijing. The winner will be determined by a simple majority of votes.