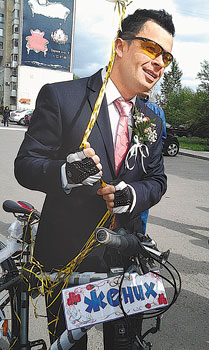 ASTANA – Every bride wants the sun to shine on her special day. That is why summer is the most chosen season in which to hold a wedding. The warm weather allows for special open air ceremonies with unusual themes and decorations.

This year was no exception. According to state statistics, from January to July, 88,000 marriages were registered in the country compared to 87,700 marriages in 2012.Amongst these marriages, 51,086 took place during late spring and summer. The marriage rate per thousand is 8.9 for the year in comparison to 9.0 the previous year. The average age of a groom was 25-29 and brides were 20-25 on average. Most of the weddings took place in Almaty where 6,698 marriages were performed during the first half of the year, while in Astana only 3,837 new couples married; among them, 104 took their vows this summer.

Not only the weather and lush greenery make summer a logical season for weddings. In order to make this day special, some newlyweds prefer to have their wedding during a holiday. Many couples that married in Astana choose the 6th of July, which is Capital Day. The Astana Mayoral press service announced that 37 couples simultaneously registered their marriage at the Atameken ethno-memorial complex this year on that day. The solemn ceremony showed the abundant patriotism of the newlyweds. “This is a great day for every young couple; the fact that this day is also the birthday of our capital makes the wedding an even more honorable event!” the head of the Office of the Department of Justice, which registers civil unions, Gulnara Sagandykova, said. This project was first launched six years ago by the Mayor of Astana, Imangali Tasmaganbetov. Each year, more and more newlyweds decide to celebrate their wedding at the Atameken complex. 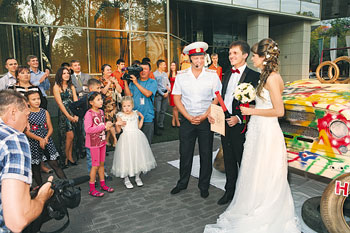 This past summer Almaty residents witnessed a wedding ceremony at a service station.

Apart from patriotic weddings, Astana witnessed Kazakhstan’s first ever bicycle wedding this year. The newlyweds first met while riding around the city, as both are passionate bike riders. “We decided to emphasize the way we met, moreover, we heard that such weddings are rather common in Europe,” the bicycle groom said. The event was supported by the Velotop Astana bike riders group whose members came to accompany the happy newlyweds during their wedding bike tour.

Another unusual wedding of the summer took place in Almaty. The bride and the groom said their sacred vows in front of Kazakhstan showman Vitalyi Dorz who was dressed as a police officer. The wedding was held at a service station. Instead of a marriage certificate, the newlyweds got technical passports to family life. The unusual wedding was inspired by the love story of Anastasia and Yegor Savchenko, who met on the highway. “My car broke down and Yegor helped me fix it,” the bride explained. The ceremony continued with a graphite competition – each guest had a chance to test their skills and adorn the newlywed’s retro automobile with wedding wishes or hearts.

In addition, Astana was named the most expensive Central Asian capital for brides by a survey conducted by a Central Asian news agency in May this year. According to the research, the average cost of a wedding dress in Astana is $2,000 in comparison to $1,000 in Tashkent and Bishkek where a dress is only $300. Wedding shoes in Astana cost $100. In Bishkek, a pair of shoes can be bought for $21. A modest wedding ring in Astana will cost $300 while in Dushanbe, it costs only $150. For a bridal hairdo, Astana girls spend about $120 compared to $55 in Tashkent and $30 in Bishkek. Bridal bouquets are also the most expensive in Astana, brides pay about $60 for them, unlike brides in Tashkent and Bishkek who spend only $36 and $13 respectively.