By Yuri Lifintsev in Sports on 9 October 2013 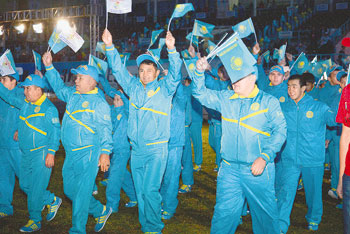 Kazakhstan athletes were the best in Greco-Roman and freestyle (boys) wrestling during the recent Eurasian Games.

Male and female athletes from Belarus, Kazakhstan, Kyrgyzstan, Russia and Tajikistan converged on Almaty on Sept. 15-20 recently to compete in the five-day Eurasian Games.

At the start of the event, Deputy Chairman of the Agency for Sports and Physical Education of Kazakhstan Ilsiyar Kanagatov said he hoped the Kazakhstan national team would win more medals in the third Eurasian Games than it had during similar games held in the city of Kazan on 6-17 July 2013 and that it would be able to compete effectively against the powerhouse Russian national team.

By the end of the event, Kazakhstan had won more medals than in similar previous competitions and was close to the Russian team in the overall number of medals won.

Kazakhstan athletes had success during the event in Greco-Roman and freestyle (boys) wrestling, boxing and judo, but gave up gold medals to the Russians in swimming. Overall, Russia took first place, Kazakhstan second, Belarus third, Kyrgyzstan fourth and Tajikistan fifth.