By Alina Usmanova in International on 9 October 2013 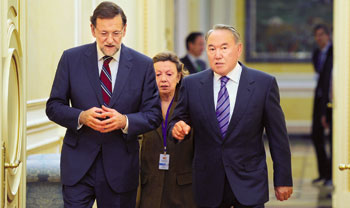 After opening the conference, Rajoy was welcomed in an official ceremony at the Akorda where he and Kazakhstan President Nursultan Nazarbayev discussed issues related to developing the Kazakhstan-Spanish strategic partnership. The meeting was focused on economic, investment, transport, industry, renewable energy and cultural cooperation amongst other topics.

President Nazarbayev noted that Kazakhstan has been strengthening relations with Spain since the first days of independence.

“We always enjoy the support and attention of the Kingdom of Spain. We had friendly relations with the former Prime Ministers of Spain who also visited Kazakhstan. Your country supported our bid to host EXPO 2017. It is also symbolic that the decision on Kazakhstan Chairmanship in the OSCE was made in Madrid. Currently, the agreement on a strategic partnership is in force between our countries. Major Spanish companies operate in Kazakhstan, while more than 70 joint enterprises are functioning here. Due to government policy, the Spanish economy has started to rehabilitate and enter a stable period,” President Nazarbayev said.

In turn, Rajoy expressed gratitude for the invitation to visit Kazakhstan.

“It was long ago that Spain and Kazakhstan perfected relations. I will later pass you a letter from His Majesty the King of Spain, written especially for you. I remember your visit to Madrid last year. Our companies are successfully working here indeed. A great number of representatives of Spanish enterprises willing to participate in joint activity came with me. If we are to talk about the economic situation in Spain and in Europe, I think that it will be the first time, because since I became the head of the Government, positives results have emerged. This quarter, we are expecting to see slight growth in the economy. The unemployment data for this year is better than last year though it is not cause for celebration. I believe that next year, the situation will be much better. We will continue large-scaled reforms,” the Prime Minister of Spain said.

At the meeting, Nazarbayev gave the Spanish copies of materials from the state archive related to the presence of 152 Spaniards in the KarLag during World War II (14 of which died there).

The official programme in Akorda ended with a signing ceremony and a press conference. Two documents were signed, a Memorandum of Understanding (MOU) between the National Institute of Public Administration of the Kingdom of Spain and the Academy for Public Administration under the President of Kazakhstan and an MOU between TALGO and Kazakhstan Temir Zholy for the construction of commuter trains.

At the meeting, the parties discussed trade and economic cooperation.

“I believe your visit will give a positive impetus to the further strengthening of bilateral interaction. Our two countries have good and stable relations. The contractual and legislative frameworks complement one another, commodity turnover is growing. Only during the first six months of this year did commodity turnover increase twofold,” the Prime Minister of Kazakhstan said.

Prime Minister Rajoy noted that a long friendship between the heads of state promotes positive relations between Kazakhstan and Spain.

Upon the conclusion of the meeting, the heads of governments had a signing ceremony for eight documents – the MOUs and agreements on cooperation, the development of transport systems, the production of equipment and education as well as other things.

After the meeting with Prime Minister Akhmetov, Rajoy opened a MAXAM company exhibition in the Palace of Peace and Accord.