By Nadezhda Khamitova in National Overview on 9 October 2013

ASTANA – Kazakhstan’s Paralympic Movement is still developing but the passion and will of its members has already bore fruit. 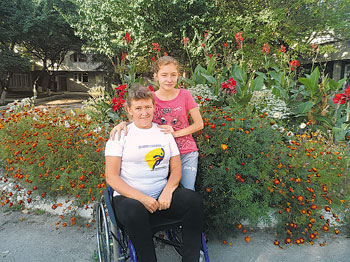 International Master of Sports of Kazakhstan in swimming Zulfiya Gabidullina is an exemplary character not only for physically-challenged sportsmen, but all others.

Kazakhstan’s National Paralympic Team won 26 medals at the IWAS World Games in Holland in September, 13 of which are gold. And one of the most decorated members of the national paralympic team was Zulfiya Gabidullina. The character and perseverance of Gabidullina could be exemplary, not only for physically-challenged sportsmen, but all others.

The Kazakhstan Paralympic swim team member was born in 1965 and is a resident of Taraz in southern Kazakhstan. She endured a level 1 disability at the age of five during a car accident, but did not lose hope in herself.

At the IWAS World Games, Zulfiya Gabidullina competed in six disciplines and won medals in each, including four gold and two silver medals. She also set three new world swimming records in the 50 metre, 100 metre and 200 metre freestyle.

Gabidullina is an International Master of Sports of Kazakhstan in swimming. She won medals at the 2011 IWAS World Games in Sharjah (UAE), the 2012 International Disability Swimming Championships 2012 in Sheffield, UK, and the 2013 International Championships in Esbjerg, Denmark. She is ranked among the top eight physically-challenged swimmers in the world and is the world’s fourth-ranked physically-challenged winner of the 50-metre freestyle. She is also ranked fifth in the 150-metre complex, fifth in the 100-metre freestyle and seventh in the 50-metre backstroke.

The Astana Times talked to Gabidullina and asked her about her life and sports, and if she compartmentalizes these things in her life.

Ms. Gabidullina, first of all, The Astana Times would like to congratulate you on your recent achievements in Holland. How did you feel then, have you been worrying or have the championships become a usual thing for you?

Thank you. Despite the fact that competitions have become part of my life, I still experience the typical pre race jitters. You never know how a race is going to end. Though, I was not one hundred percent confident in Stadskanaal [host of IWAS WG 2013], everything went as it should have.

Which championship will you will take part in next?

I am currently enjoying vacation in a sanatorium, recovering from hard preparations and competitions. I will get back to training on October 15 and then we will see what will be the next championship I may take part in.

Speaking of training, would you share with The Astana Times readers how they go?

Usually, I train for up to five hours at a time. Before championships or major competitions, I might take up to seven hours per day.

Why you have chosen swimming?

I began as a wheelchair racer, and then we got to race on three-wheeled chairs, which was hard for me physically, it was narrow and uncomfortable. Then I turned to swimming. Actually, I was training in two disciplines from the start: swimming and the above mentioned races on wheelchairs. There was no such training for swimmers before, thus it was my second choice, but it has turned out that it was my destiny and I decided to dedicate all my time to swimming.

Do you have a hobby?

My hobby is knitting, sewing clothes and drawing – I enjoy handicraft.

As far as we know you have a daughter…

Yes, my daughter Rufiya is 14 years old, she enjoys dancing and drawing. Her personal exhibition took place in March, with 50 exhibited paintings in total. We support each other.

You are a person with a cheerful character, what is your motto?

Only forward (and Never look back)! My body is static due to health reasons, thus I have to work out and train on a constant basis, I had to train at home by myself. Later we started to get invitations to competitions, and in the beginning, I had to train on my own, without a coach. In 2007, my coach [Honored coach of the Republic of Kazakhstan, Sattar Beysembayev] saw me at competitions and took me under his patronage. This is how my professional training started. So it could be said that I started to train for health and then came into professionals sports.

How does the work go with your trainer?

Sattar [Beysembayev] is a very good person, and very attentive coach, he is also very demanding. Sometimes he can be strict, sometimes kind. He worries more for us than we do for ourselves. Many say that I am lucky to have such a coach, and I always reply that the luck finds those who strive.

As a professional paralympian, what can you say to young physically challenged athletes?

Never look for an excuse as to why you cannot do something . You just have to strive for it. Anyone can overcome everything. I also thought that many things are unreachable in my life, but it turns out that there is nothing unattainable. You can even reach the stars if you want.