By Galia Shimyrbaeva in Culture on 9 October 2013

Kazakhstan film officials are seeking to have the Kazakhstan film “Shal” (Old Man) included in the Best Foreign Films category in the next American Academy Awards, said Chairman of the Oscar committee in Kazakhstan Satybaldy Narymbetov. 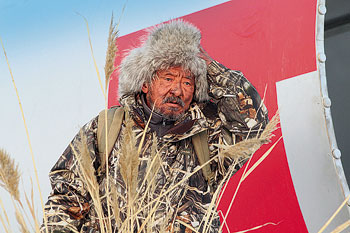 The movie Shal has won more domestic film awards than any other Kazakhstan film released over the past year.

The film by director Yermek Tursunov has already been awarded the Grand Prix of the Open Film Festival of the Commonwealth of Independent States, Latvia, Lithuania and Estonia Kinoshock that ended on Sept. 23. The movie’s leading man Yerbolat Toguzakov was also awarded that festival’s Best Actor award.

“Kinoshock is a pleasant surprise to us. We did not expect to win the Grand Prix,” said “Shal” Producer Alexander Vovnyanko.

Tursunov said this festival has long been familiar with his works. In 2007, he received the festival’s best screenplay award.

“Shal,” which was released only in Kazakhstan and grossed 90 million tenge ($584,188) has also won more domestic film awards than any other Kazakhstan film released over the last year. The film is also being considered for a number of awards in Russian film competitions.

Its story line evokes that of the Old Man and the Sea by Ernest Hemingway but is set in the vast expanses of Central Asian steppes.