ALMATY – 2009 world champion and one of Kazakhstan’s top athletes, Maxim Rakov, won gold at the Judo Grand Prix in Almaty on Sept. 29. 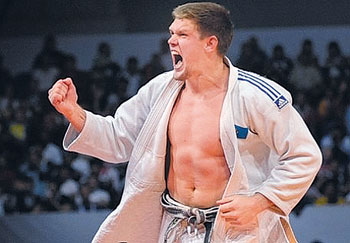 Rakov edged out his rival from Brazil, Rafael Bazacarini, 21, in a close final fight in the 100 kilogrammes category. The 28-year-old displayed the full array of his fighting skills during the fight and received the appreciation of his home fans.

In an interview after the victory, Rakov said it was the first time he had fought against Bazacarini and it was complicated competing against the Brazilian judoka as Bazacarini moved a lot and restrained Rakov’s attempts to knock him over. The Kazakhstan gold medalist is now looking forward for the Judo World Championship that will take place in Astana in 2015.

Almaty was the second stop on the international judo circuit after the recent competition in Rijeka, Croatia. The Sept. 29 event, which was the first time Kazakhstan had hosted a world judo tour event, attracted 152 competitors from 13 countries. In total, 63 women and 89 men competed in seven weight categories.